Why I'm sick of alumni magazines

The requests for money never cease 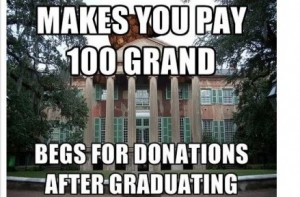 An appropriate meme from QuiteRly.com

The other day, I got a copy of the Alumni Gazette, the magazine sent to alumni of the University of Western—sorry—Western University. This was no surprise, of course, since they’ve been sending them to me for years. In fact, as an alumnus of three universities, I get these things frequently.

They are always slickly produced—and they always make me a bit queasy.

I open these publications in the vague hope that I’ll see something about someone I went to school with, or hear some news about a favourite professor. It never happens.

Instead, I get a series of breathless articles about people I never knew who are changing the world.

A more charitable version of myself would swell with pride to be associated with such luminaries, but the cynic in me can’t help feeling like the whole thing is a big soft sell for the fundraising division of the university. Because, of course, that’s what it is. Nobody sends you a glossy magazine four times a year out of the goodness of their hearts.

And sure enough, in the middle of the mag is a multi-page spread on “The Campaign for Western” (is Western running for something?), and then another ad featuring smiling students imploring me to “Fund the Future,” and, then, near the end, still another ad urging me to consider giving good old UWO—-sorry—WU, a “planned gift” which means leaving money to the university in my will. Yes, they even want my money after I die.

All of this might be more palatable if I felt like I was getting the real story about a place I called home for four years. But I know enough about universities to know that’s not true. There’s no talk of controversy, let alone scandal. Because, recall, that’s not the point. The point is to get you feeling good about the old Ivey-covered halls. And it’s not just Western. All universities, so far as I know, do the same kind of cheerleading.

See how great we still are? Aren’t you proud to be one of us? Shouldn’t you write a cheque?

The irony of it all is that this reaction is never the one I actually have. Because to be perfectly honest, seeing all those uber-successful people—hob-nobbing with Bono or conquering the film industry—doesn’t make me feel better about the university, it makes me feel worse about myself.