Why I'm skeptical of the tentative deal in Quebec

Provisional council will look for savings in the wrong places 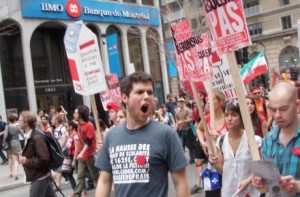 It’s easy to dismiss Quebec’s protesting students. Many people in the Rest of Canada did exactly that about 12 weeks ago when student unions decided that they would skip classes and block others from pursuing their educations too.

That was followed by near-nightly vandalism in Montreal, regular disruptions to commuters and policing bills that are no doubt in the millions.

Besides, the tuition students pay outside Quebec is much higher. After a fee increase of $1,778 over seven years, Quebec students will still pay far less than the rest of us. The economy is weak, Quebec taxpayers are overburdened, therefore it seemed to many of us that students are simply being selfish.

In contrast to the smashed windows and masked thugs, the agreement Quebec student groups made with Premier Jean Charest over the weekend will therefore strike many as a return to reason.

But take a closer look. There’s something missing that will make future peace unlikely.

Student groups have agreed they will suspend protests (after consulting their members) in exchange for a provisional council that will examine university budgets. The tuition increase will be delayed one semester, until after the council’s recommendations in December. The idea is that savings might be found that could reduce mandatory student fees, offsetting higher tuition.

That would be a reasonable compromise—if all options for savings were on the table. They aren’t.

Before I get into that, it’s worth pointing out that there are legitimate reasons students might suspect that millions in savings can be achieved. For example, there are a few top administrators who take home wild compensation—43 were in the $200,000 club in 2010. McGill principal Heather Munroe-Blum earned $356,174 and was given $229,307 in other compensation that year.

Concordia paid even more to have people not work for them. They gave $4-million in severance to a handful of administrators and were then fined $2-million by the government for doing so.

But if the goal of the new council is to find substantial savings, it will need to go further than its current mandate, which includes savings from “relocation of campuses, advertising expenses, issues regarding buildings, management personnel, performance reporting and financial transfers.”

The council will not look at the single biggest expense: professors’ salaries and benefits.

It should. Full-time professors of all ranks made an average of $108,506 at McGill and $111,638 at Laval in 2010. According to the Ontario Undergraduate Student Alliance, faculty salaries in Quebec grew an average of 5.0 per cent anually between 2003 and 2009. Pension costs are ballooning too.

Slowing the growth in compensation would do wonders for university budgets. But it’s not the only way professors could help out. One interesting proposal, which was floated by the radical group CLASSE last week, is that professors should spend much less time on research that—let’s face it—is sometimes frivolous. More time teaching would stretch tuition and tax dollars much farther.

But it seems a non-starter. Professor unions come out swinging every time the idea is uttered. (They did so recently, when experts Ian Clark and David Trick proposed it in their book Academic Reform.) That’s because eggheads prefer books and conferences to classrooms and students.

It’s too bad. I doubt the provisional council will find substantial savings without at least looking at the cost of professors. If they don’t, we may find ourselves right back here again in January 2013.

Unless, of course, the government caves. That may be what student unions are still hoping for.