Why it matters that Trudeau didn't try pot until 18 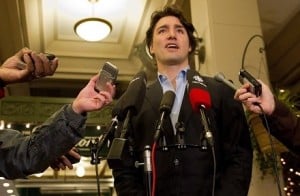 Justin Trudeau, a man who wants to be prime minister, told The Huffington Post that his first experience with cannabis was at an Amsterdam café at the age of 18. A friend of his bought hash and they tried to heat it with a candle.

“It was just a total disaster,” he said, seemingly alluding to the fact that he couldn’t get high rather than any regrets about using drugs. Since then, he says, he used marijuana five or six times, most recently three years ago at a pool party at his house where someone passed around a joint.

Since saying earlier this year that he supports legalization and regulation of marijuana to keep it out of the hands of children, the Liberal leader has been mocked by people who don’t think asking for ID is a good strategy for stopping teens for doing what they please. (See: teenage drinking)

Those critics may be right, but at least Trudeau is advancing the idea that adults should be free to make their own choices while also warning kids about the dangers. He made this distinction clear in the Huffington Post interview: “For all the studies that have shown that it is less harmful to people than alcohol or cigarettes, the impact on a developing brain is significant and concerning.”

It’s a distinction supported by science. Doctors are increasingly worried about teens—not adults—using cannabis. That teenage brains may be more susceptible is often missed in the debate.

Consider what’s one of the best long-term studies ever published on marijuana’s impact on intelligence. British and U.S. scientists tracked 1,037 people whose IQs were tested at age 13 and then again at the ages of 18, 21, 26, 32 and 38. At age 38, those who had smoked lots of marijuana before age 18 had IQs that had dropped significantly (about six points), while those who starting smoking after 18 or didn’t smoke were roughly as smart. “I’m fairly confident that cannabis is safe for over-18 brains, but risky for under-18 brains,” researcher Terrie Moffitt told The Guardian.

It’s not just intelligence. An animal study published in Neuropsychopharmacology in July is one of many that suggests pot use may increase the risk of mental illness in adolescents but not adults.

Dr. Elizabeth Osuch, who runs the First Episode Mood and Anxiety Program at a hospital in London, Ont., told me last year that marijuana may trigger depression, anxiety and schizophrenia and that teens aren’t getting the message.

Since Trudeau’s announcement in support of legalization, the NDP’s Thomas Mulcair said he smoked but that, “the marijuana that’s on the market is extremely potent and can actually cause mental illness.” Prime Minister Harper said he has never used it and his Conservative party also said they have, “no interest in seeing marijuana legalized or made more easily available to youth.”

That means all three federal parties have acknowledged the danger pot poses to youth. When students debate legalization this fall on campus, Trudeau’s position will likely be popular. But they won’t be able to escape the fact that even he thinks marijuana might harm teenage brains.