Why Manitoban students are studying in Minnesota

Tuition is a deal. School spirit is an experience. 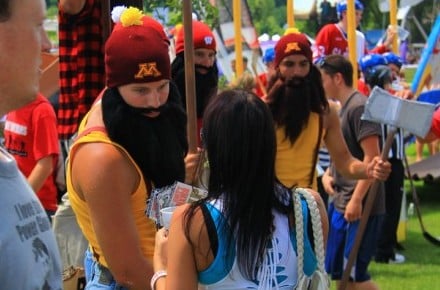 School spirit at the University of Minnesota by Mulad on Flickr

Manitoba has a 20-year-old reciprocity agreement with the State of Minnesota and at least 21 Canadians are currently studying at campuses of the highly-regarded University of Minnesota.

A Canadian from outside of Manitoba would pay $20,000 to attend as an international undergraduate in Minnesota, but Manitobans pay in-state tuition, which is only $8,300.

That’s a bargain compared to other Canucks, but it’s more than twice what most Manitobans pay at home.

So why go south?

The emphasis on school spirit is another attractive quality of studying in Minnesota, James said. He feels pride at the University of Minnesota. “Just come down to the campus for a hockey game, football game, or spend a day around campus. It is an entire community where they cater to students,” he says. He’s found public transportation more accessible and affordable too.

Reciprocity works both ways, of course. There are approximately 50 students from Minnesota currently studying at Manitoban universities, according to Minnesota Public Radio.