Why religious schools shouldn't get funding

Prof. Pettigrew: It's not just the anti-gay agenda. 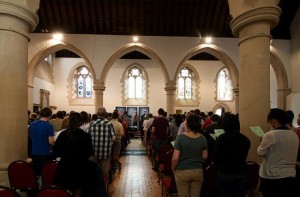 Canada’s Christian post-secondary institutions just can’t stay away from controversy. It seems like only yesterday, everyone (including this guy) was talking about the CAUT’s reports condemning various institutions for their lack of academic freedom.

More recently, the law community has had its briefs in a knot over Trinity Western’s push to get a law school. Can a school that requires adherence to a rigid code of belief really educate good lawyers whose very stock in trade is free and open discussion? A lot of people think not.

And now New Brunswick’s Crandall University has raised eyebrows for getting millions in federal funding. In fact, religious universities in Canada received some $20 million from the Harper Government’s 2009 Knowledge Infrastructure scheme.

And all this as provincial governments across the country are cutting funding for public universities. I’m sure New Brunswick’s public universities, whose funding is being cut, would love to have some of the money that Crandall is getting.

Most of the case against expanding or funding such institutions is that they expressly condemn homosexuality as part of their fundamentalist interpretation of the Bible. This kind of critique is right in a sense—no institution should discriminate against gays and lesbians and any that do should not get public money—but it doesn’t go nearly far enough. Focusing on the homophobia of religious schools is safe because it allows the critic to maintain or imply that he has no beef with religion per se, and in turn imply that public support of religious schools would be fine if they would just drop the anti-gay stuff.

So let me be more direct. No Canadian public money should go to Crandall, or any other educational institution whose aims are explicitly religious. Not one penny. Well, nickel.

It goes much deeper than sexuality. The anti-homosexual positions of such schools is just a symptom of what’s more profoundly wrong here. Fundamentalist institutions like Crandall—and let’s be clear, that’s what they are—necessarily divorce themselves from reality and thus insulate themselves from full and rational discourse and debate.

Defenders of such religious schools like to imagine that they can work together with “secular” universities and complement them. But secular is what universities should be. We don’t balance astronomy classes with lessons in how to predict the future using astrology. We don’t hire psychics to complement the work of psychologists; and we don’t offer courses in healing with crystal vibrations to go alongside courses in geology.

Secular just means reality-based. Another word for “secular university” is “university.” And university funding shouldn’t be going anywhere else.