Why the fuss over Confucius Institutes? 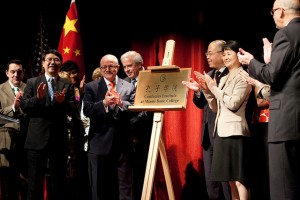 Admittedly, it does seem worrisome. Within the past decade, a dozen Confucius Institutes, Chinese language and culture schools funded by the Communist government in Beijing, have popped up on Canadian college and university campuses, trumpeting programs to “improve understanding” of China, and to teach Mandarin.

Then, in 2011, as the Globe and Mail reported recently, a teacher dispatched from China to teach at the Confucius Institute at McMaster University in Hamilton, Ont. quit her post and filed for refugee status. The newspaper reported that the teacher, a follower of China’s repressed Falun Gong movement named Sonia Zhao, was unable to express her political or religious beliefs as a Confucius Institute teacher—it was prohibited in her job contract, which outlaws teachers with Falun Gong affiliations. In her formal complaint to the Human Rights Tribunal of Ontario, Zhao accused McMaster of “giving legitimization to discrimination.”

It’s hardly the first time Confucius Institutes—of which there more than 320 worldwide—have been cast in an unfavourable light. Funded by Hanban, a branch of China’s education ministry, the institutes have been framed as propaganda tools that export Beijing’s tightly controlled worldview for international consumption, limiting student discussion of Tibet, the Tiananmen Square massacre and the status of ethnic and religious minorities in China. Last summer, human rights lawyer Clive Ansley told the Epoch Times that Confucius Institutes, in banning teachers with ties to the Falun Gong, are breaking “all human rights codes in Canada.”

In June 2011, the University of Manitoba turned down the opportunity to open one on its campus. UBC has done the same. All this begs the question: are Canadian schools, generally cash-strapped and faced with rising interest in Asia and its languages, wrong to open their arms to subsidized language instruction from Chinese-funded institutions with curricula shaped in Beijing?

It should be noted that Confucius Institutes don’t overtly teach politics. At first glean, their focus is quite banal. The Confucius Institute in Quebec for example, housed at Montreal’s Dawson College and the University of Sherbrooke, advertizes itself as a place to learn Mandarin, Chinese calligraphy, painting and Tai Chi. Much like Germany’s Goethe Institut, France’s Alliance Française and the UK’s British Council, Confucius Institutes are an expression of China’s push for “soft power,” wherein the People’s Republic has the cultural authority to wield further influence outside its borders.

But Confucius Institutes seem to garner more attention than other international culture and language schools. Yeun Pau Woo, President and CEO of the Asia Pacific Foundation in Vancouver, says the reason could be that they come from an authoritarian country with which Canadians are generally less familiar than some European nations. “The discomfort over different political and social systems adds to the suspicion and contributes to this controversy,” says Woo.

When asked about the alleged deficit of intellectual freedom at some Confucius Institutes, Young says that all the instructors she’s interacted with from the school at Brock have been willing to broach any topic. “We’re not aware of that restriction,” she says.

But even if Confucius Institutes are largely innocuous, the fact remains that they are a branch of an authoritarian government, and that in their operations across the globe, they carry elements of that authoritarianism—such as the contractual exclusion of Falun Gong ties—alongside quality Mandarin instruction. For Woo, it is the latter feature that Canadians should focus on. “Language instruction always comes with values and with ideologies and messages,” he says, “but in the Canadian context, where academic freedom and intellectual expression are highly prized . . . an institution that can provide high-quality language instruction should be embraced.”