Why universities should consider pay cuts 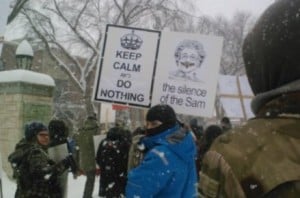 A protest against cuts to the University of Alberta (Ravanne Lawday)

I attended a lecture at the University of Toronto last week where some of Canada’s brightest higher education experts spoke to a Canadian Studies class about The Future of Canadian Universities. It was in a derelict lecture hall in University College with broken seats and dusty windows, a common sight in an age of austerity.

The consensus among the administrator, the bureaucrat and the professor on the panel was that with tuition at $7,180 and rising in Ontario and universities experiencing annual crises to balance their books, something’s got to give. According to them, that something ought to include “differentiation,” a government policy that would force professors and schools to focus on what they do best, either teaching or research—not both.

Differentiation may indeed help and it’s a conversation we should have. But it occurred to me, as I sat in that creaking seat, that something else ought to give. Them.

Administrators, bureaucrats and (to a lesser extent) tenured professors, just don’t seem to be getting it. Students, parents and taxpayers are increasingly skeptical about the value of university education, and high pay and benefits are symbols of an ivory tower that’s out of touch.

Still, it was panelist Harvey Weingarten, president and CEO of the Higher Education Quality Council of Ontario (a public agency focused on quality) and a former president of the University of Calgary, who best illustrated the disconnect between those running the academy and the rest of us.

When a student asked on Thursday about high tuition, Weingarten told the tale of when his office was “occupied” over a $127 fee hike. The students, he said, weren’t opposed to paying more, but simply wanted to know what value they’d get from the increase. “It’s a reasonable question,” he said, “and if we articulate what learning outcomes they’ll achieve and how we’re spending their tuition dollars,” he added, “I predict we’ll see far fewer students occupying presidents’ offices.”

I’ve seen him speak before and I’ve read his blog. He’s a smart man and, like many administrators I’ve met, I don’t doubt that he cares about students and works very hard. But after hearing this out-of-touch statement about “value,” I can better understand the outrage of the occupiers.

Ontario’s Public Sector Salary Disclosure revealed on Thursday that Weingarten earns $218,000. That’s a huge salary compared to what most most Canadians will ever make, albeit a pay cut from the $441,000 he earned as president of the University of Calgary in 2008-09. Then again, he’s enjoying a roughly $4.5-million pension from Calgary, so he can afford to now work for $218k.

Here’s why I see that as so out of touch. Students who are struggling to pay their rent, going deeply into debt while worrying about getting a job—any job—after graduation, will probably never feel they’re getting enough “value” from their degrees that such numbers won’t be offensive. It’s even harder to justify such amounts while governments cut university budgets, as they just did in Alberta. It’s not surprising, then, that Alberta students are demanding administrator pay cuts in response.

These may be truly charitable people, but I’ve yet to read a press release headlined UNIVERSITY PRESIDENT DONATES HALF OF $300,000 SALARY TO SCHOLARSHIP FUND. A move like that may not satisfy the occupiers, but it would go a long way to building goodwill with the public.

Administrators will argue they could make more in the private sector, in the U.S., Asia or Dubai. They will argue their salaries are a drop in the bucket at big institutions. They will say they deserve to be the best paid, because they are the best and the brightest. That’s all probably true. Still, can’t the best and brightest just be happy with $120k, a modest pension and the dignity of the job?