Why we should care that a professor banned Fox News

It's not really about the censorship 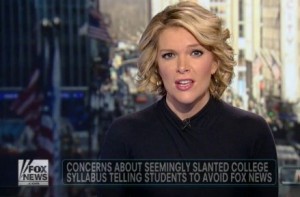 When Stephanie Wolfe banned her students from citing the Onion, “literally a parody,” and Fox News, “a biased news station,” she was not firing any kind of ideological salvo. This West Liberty University Visiting Assistant Professor was probably, like most of her peers, pressed for time and a little nervous about taking over for a full-time Professor. The syllabus contains typos, internet phraseology, and is generally slap-dash as students have come to expect from the necessarily distracted young paupers who now teach many of their undergraduate courses.

Though the school would of course assassinate the poor woman before letting her make a statement, I think it’s safe to assume she didn’t put up much of a defence of her offhand prohibition. She’s sorry, the school’s president is sorry, the syllabus is corrected, and Megyn Kelly got to indulge her passion for poorly concealed sneering. Shouldn’t we all be happy, now?

I think what people find interesting about this story is not the grand narrative of ideological oppression seen in close readings of this document by conservative blogs, but rather that this provides a candid look at modern university education. It’s the very callousness of the ban, the seemingly total lack of awareness that banning a major news source for political reasons might be controversial. It’s not that a case couldn’t be made, whatever the strength. It’s that she didn’t seem to realize one might be necessary. It speaks to the culture, that a temporary junior under-professor in political science could dismiss the total output of a multi-billion dollar news machine without even realizing that doing so was worth a second thought.

I never thought I’d find myself typing this, but I really can’t summarize the absurdity of this ban any more succinctly than Fox News itself: Wolfe banned students from citing “The Onion, an openly fictitious parody of real-life news, and Fox News, a professional news organization.” The widely reviled Quasimodo of American news media published this wonderfully passive-aggressive piece of straight news – the image caption calls it a “seemingly slanted college syllabus” – and graciously allowed Liberty’s President to prostrate himself before them and make excuses for some temp’s snarky attempt at self-entertainment.

With the sheer number of bitter, underpaid 30-somethings being given such localized despotic power over their almost-peers, it’s amazing that we don’t see these sorts of scandals more often.

It certainly could have been worse—say, if a TA at Jerry Falwell’s Liberty University had banned MSNBC. This requires that we evaluate the target of her ban: Should she have banned Fox News? Of course not. A society this starved for quality, professional news coverage, and this ostensibly concerned about that situation, cannot turn its back on a company that employs so many thousands of talented, enthusiastic professionals. The many and widely publicized indecencies of the Fox News brand, from spin to outright political stumping, are no more egregious than the output of the many hundreds of high-profile liberal news blogs, or of wacko political think-tanks. The difference is that these seemingly acceptable academic sources do nothing but spin, while Fox News also maintains a small side-business in the form of a multi-national news factory that directs some of the industry’s most talented professionals (along with some genuine hacks).

This incident does imply that Stephanie Wolfe might be a bit of a grating ideologue—but there are worse things to be. I don’t think she is a censor in the classical sense, in that she didn’t set out to oppress a point of view. She’s simply a shallow thinker, or was in this case, a teacher in political science who didn’t think through the political implications of her writing. Students deserve better than that, but we can discuss the implications of her gaffe without coming down on her too too hard. We ought to see in her story that much of the liberal bias in universities is both less intentional and less intellectually sophisticated than many people assume.