Why you should let your teenager sleep in 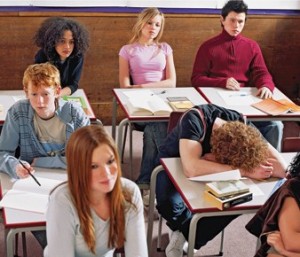 “The difference is like night and day.” So, perhaps with tongue slightly in cheek, says retired principal Wayne Erdman of Eastern Commerce Collegiate Institute’s experiment in late high school start times. Eastern Commerce C.I., located just off Danforth Avenue east of Toronto’s Greektown, is in the middle of its second year of starting classes at 10 a.m. That’s a shockingly late hour by contemporary North American standards, and some traditionalists will never learn to like the idea. The working world that Eastern’s students are about to enter, they say, doesn’t compromise with late sleepers; it fires them. The sooner the kids learn the harsh truth, the better.

But Erdman tells the Toronto Star that the late-start concept, though not yet subject to its first full scientific analysis, looks like a hit when it comes to educational outcomes—and parents and students seem to agree. Local trustee Cathy Dandy is an aggressive advocate of research showing that there are good reasons to give adolescents a break that neither children nor adults may need; if she had gotten her way, Eastern classes would be starting as late as 11:30 a.m.

That sounds crazy, but it might be less crazy than the old way of doing things. It is starting to look as though a forward shift in sleep patterns is a natural accompaniment to sexual maturation—not just in humans, but in mammals generally; rats and monkeys, it seems, engage in their own version of what parents witness in their recalcitrant 16-year-olds. Teenagers have an ability to stay up late and sleep in that a 2004 Dutch-German study characterized as “unsaturable,” and even proposed it as a defining feature of adolescence. You’re officially an adult when you can’t stay up all night anymore.

This appears to be a feature rooted in biology, not just social arrangements. It has been confirmed in studies using “actigraphs”—wristwatch-like devices that measure tossing and turning in bed—and the sampling of melatonin, the hormone that serves as the mammalian body’s clock. Practical research into school start times, meanwhile, suggests that teenage behaviour and attitudes can worsen when the day begins earlier, and improve when it kicks off later. Academic impacts are harder to confirm, but in 2009, a study of 3,000 Houston children aged 11 to 17 found that students getting less than six hours of sleep a night were twice as likely to report poor grades upon follow-up a year later. And the benefits of late starting, if they exist, will not be confined to the classroom and the home. In a 2008 study conducted in Fayette County, Ky., a one-hour forward shift in the start times at public schools was associated with longer reported hours of sleep—and a 17 per cent reduction in accident rates among teen drivers, during a period when rates for all other drivers increased eight per cent.

Innate skepticism of research claims like these is always warranted, and educational research, in particular, is notorious for half-hearted compliance with good scientific practices. What stands out in the late-start issue, though, is that many lines of evidence—biological, pedagogical, social—appear to be pointing in the same direction. The general phenomenon of sleep is still poorly understood, but it seems clear that treating teenagers as if they were adults cannot be appropriate.

Still, the traditionalists might have a point. School is not just about trowelling the maximum volume of information into the heads of children. It’s also about encouraging good habits, about teaching responsibility and productivity. The verdict will not truly be in on the Eastern Commerce C.I. experiment until several cohorts of its students have entered post-secondary education or the workforce, and their outcomes in those settings have been checked.

But in the meantime, God be praised, a little more diversity is being introduced into an education system that badly needs it. The homogenizing factory model that our schools have followed for the last century isn’t even all that popular in factories anymore. Eastern Commerce’s unusual school day may be bad or good in itself, but most likely it’s very good for some particular students who, biologically, just aren’t early-morning people. And let’s face it: most of the graduates of Eastern won’t be entering a simple world of classic nine-to-five work governed by a steam whistle. Even if they wanted single-career lives, punching the same clock every day for the same company for 40 years, they would have a hell of a time finding them. It’s one thing to emphasize enduring traditional values; it’s quite another to insist on obsolete ones.