Negative news stories may affect stress (but not for men) 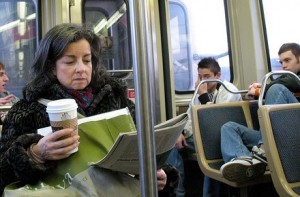 It’s said that no news is good news. But what’s the effect of bad news presented by the media?

For women, exposure to negative news stories may make them more reactive to subsequent stressful situations, according to a study published Wednesday in the journal PLoS One, which did not see a similar response in men.

Researchers also found that women had a better recollection of information learned from those so-called bad news stories.

“It’s difficult to avoid the news, considering the multitude of news sources out there.

“And what if all that news was bad for us? It certainly looks like that could be the case.”

To conduct the study, researchers recruited 56 subjects, aged 18 to 35, and divided them into four groups, two for each gender. Each group was given several recent articles to read from two Montreal daily newspapers.

One group of men and a group of women read emotionally neutral news stories, about subjects such as the opening of a new park or the premiere of a film. The other two gender-segregated groups read “bad news” stories, which described such events as murders or traffic accidents.

Saliva samples were taken from each participant and their levels of the stress hormone cortisol were measured within minutes of having read the stories.

“When our brain perceives a threatening situation, our bodies begin to produce stress hormones that enter the brain and may modulate memories of stressful or negative events,” explained senior author Sonia Lupien, director of the Centre for Studies on Human Stress.

“This led us to believe that reading a negative news story should provoke the reader’s stress reaction.”

The researchers found that cortisol levels were pretty much stable in all groups right after reading the articles — no matter the subject matter.

But that wasn’t the case after participants were faced with back-to-back stressful tasks — a mock job interview followed by mental arithmetic — within half an hour of the news-reading session.

Researchers found that women exposed to negative news were more reactive to the subsequent stressor, as shown by elevated cortisol levels, compared with men who read bad news stories and males and females given neutral articles.

When all participants were given memory recall tests the next day, Marin said women who read negative news stories were better able to recall the details of the articles. “It is interesting to note that we did not observe this phenomenon amongst the male participants.”

The differences between how men and women react when confronted with negative news may be evolutionary, say the researchers. Scientists have speculated that an emphasis on the survival of offspring may have influenced the development of the female stress system, leading women to be more empathetic.

“The other thing is women have a tendency to ruminate more than men,” said Marin, theorizing that turning an experience over and over in one’s mind might store it more effectively in the brain’s memory banks.

“This could explain why women have higher (levels of) memory after.”

Joanne Cantor, a professor emerita in communication science at the University of Wisconsin, called the study “really interesting,” in part because the researchers used an objective measure — cortisol — to compare gender-based reactions to bad news.

“It makes sense that a previous stressor might affect a stressor that comes right afterwards,” Cantor, who was not involved in the study, said Wednesday from Madison, Wis.

“Because if you’re already feeling levels of stress, then the next thing that comes along that’s stressful is going to be more of a challenge, because maybe your ability to cope with stress is compromised a little bit.”

However, she questioned the finding that men appear less stressed after exposure to negative news stories, wondering if males might react differently if the news were delivered visually on TV, for instance, instead of being read in a newspaper. The severity of “bad news” content might also be a factor, she suggested.

“My conclusion would just be to say, ‘Look at what we’ve observed in women. We haven’t observed it yet in men.’ But at least in my opinion, this doesn’t warrant the conclusion that men are not susceptible,” Cantor said. “More research needs to be done.”

And when it comes to women, would vocation make any difference in how they respond to negative news in the media?

“That’s a very good question,” said Marin. “Do we have the same thing in (women who are) firefighters or police? We cannot answer for now … That needs to be tested in future studies.”

Cantor, who gives public lectures examining the emotional impact of mass media, said she advises her audiences to “choose your news.”

“First of all, don’t leave the news on all day because so much of it is negative, and you’re likely to experience negative emotions which are stressful and interfere with other things,” said Cantor, author of the book “Conquer Cyber Overload.”

“Of course, you need to get your news, but it’s better to find ways to do it that will expose you to the news that you want to know and need to know,” she said.

“You can’t keep away from all news, but you can certainly choose when and how to expose yourself to the news.”