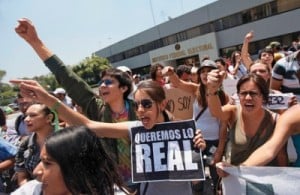 From Maclean’s magazine. By Gabriela Perdomo.

Just weeks ago, Enrique Peña Nieto seemed to have Mexico’s July 1 election easily in hand. But a series of demonstrations led by students at a posh Mexico City university has shaken the centrist Institutional Revolutionary Party (PRI) candidate’s campaign, putting a significant dent in his lead.

What had been a dull race was turned on its head on May 11, when Peña Nieto was speaking at the private Universidad Iberoamericana, “La Ibero,” as it is known, in Mexico City. Before then, Peña Nieto looked set to crush both Josefina Vázquez Mota, the governing National Action Party (PAN) candidate, and Andrés Manuel López Obrador of the left-wing PRD, the Party of the Democratic Revolution.

But tensions at La Ibero ran high as the audience, some holding signs, criticized his cozy relationship with the media. They erupted when Peña Nieto defended his handling of a 2006 uprising, when he was governor of Mexico State; the case involved incidents of police brutality against civilians. Students booed him out of the auditorium, and PRI officials clumsily rushed to the airwaves to depict the audience as “paid agitators.” Incensed, three students gathered video of 131 attendees flashing their student IDs to prove they were enrolled at La Ibero and posted the result on YouTube.

Soon, calls for others to join the movement—to become the symbolic “No. 132”—spread to Twitter. And so a name was given to the uprising—#yosoy132, Spanish for “I am 132.” The viral reaction was both “surprising and intimidating,” admits Rodrigo Serrano, a communications student at La Ibero who launched the original video from his couch. “The country was angry. And we somehow detonated that anger.”

Hundreds of thousands of students from over 50 Mexican universities have since joined the movement. They denounce Peña Nieto as the candidate of the establishment, the face of the PRI, which ruled for 70 years until the PAN unseated it in 2000.

But more than being anti-Peña Nieto, the movement aims to shake a media duopoly made up by Televisa and TV Azteca that maintains close ties with the PRI. Much like the Occupy movements that sprung up all over North America last year, the youth movement’s message is somewhat unfocused, but it is a force to be reckoned with. “This truly has been an awakening of young people who are usually apathetic to the political process,” says professor Agustín Basave, director of postgraduate studies at La Ibero.

The students have already claimed one major victory: Televisa and TV Azteca both broadcast the second debate on their main networks, answering a direct demand by protesters. (The first debate was aired on their secondary channels, which don’t reach certain regions.)

Peña Nieto’s popularity has been in steady decline ever since protests erupted, says Marcelo Ortega, a pollster with Consulta Mitofsky. While the PRI candidate has lost more than 10 points in just a few weeks, López Obrador is steadily gaining momentum. The latest Mitofsky poll has Peña Nieto leading with 43 per cent, followed by the left-wing candidate at 29 per cent. A poll by Reforma places the two much closer, at 38 and 34 per cent, respectively. Vázquez Mota, another status quo candidate, has been relegated to third place, polling at around 20 per cent—an embarrassment for the governing PAN and current president Felipe Calderón. López Obrador is gaining ground because the leftist candidate is “the only one in a position to offer change,” says Ortega. Vázquez Mota represents the ruling party and the PRI remains synonymous with the status quo, even after 12 years of PAN governance.

The students have made headlines, but Mario Canseco, a Mexican-Canadian pollster and former vice-chair of La Ibero’s student council, thinks the movement’s main goal of media fairness misses what he feels is the country’s most pressing issue: drug-related violence. “What’s important for a student in a private university in Mexico City is very different from what’s important for a student in a rural area that has been ravaged by violence.” Since the student movement sprung up last month, little to no attention has been given to the gruesome escalation of drug-related crime, which involves massacres and beheadings. Thousands of people have been killed since 2006, 18 of them this June. In most people’s minds, President Calderón has failed miserably on the country’s security file. This is the main reason why his party is about to be voted out of power.

Serrano, the student from La Ibero, defends the movement. “People now know they can talk directly to power. We’ve shown that you don’t need to meet with a senator to have your voice heard,” he says. “A YouTube video is just as important.”