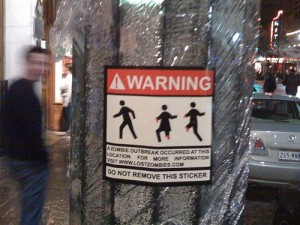 A number of articles surfaced Aug. 18 about a study conducted by a professor and team of students concerning the outcomes and preventative possibilities of a zombie attack on the human population.

While this sounds like an extremely awesome way to “conduct research,” I was a bit skeptical on its credibility.

Reading on, however, I learn this research was then used to create mathematical models to conclude whether or not the human race could survive a zombie plague and incorporated it into a paper entitled: “”When Zombies Attack!: Mathematical Modelling of an Outbreak of Zombie Infection.”

On top of narrowing the zombie ‘type’ they used for their model to the “slow” kind (Phew, the infection-ridden, speedy buggers from 28 Days Later still give me nightmares), the team took into account the different incubation and spread of ‘zombification’ times across a population that vary from countless zombie movie plots to games.

Now, to anyone who’s watched Romero’s Dawn of the Dead, heck, even Shaun of the Dead, a million times and watched their dedicated group of friends team up to play Left 4 Dead more than is recommended for good health, you’d know the chances of making it out alive are slim — and especially if you remember to watch the credits for Zach Snyder’s 2004 remake of Dawn of the Dead.

Not surprisingly, this is what the researchers discovered as well.

The study concluded that the only way to rid the world of zombies (hypothetically, of course) is 10 consecutive days of military strikes.

Great. I’m thoroughly amused. But where are they going with this?

The research paper, according to the article: “Takes a decidedly lighthearted approach to exploring serious, real-world infection rates.”

In the wake of an ongoing swine flu pandemic that joins a long list of deadly viruses, including the recent Severe Acute Respiratory Syndrome (SARS), studies contributing to fighting the spread of infectious diseases could be significant life-saving strategies. However, I don’t think I’ll hold my breath if the solution for a zombie-like pandemic is military annihilation of all infected beings.

Interesting, though, is the idea we can look into popular culture and movie magic — literally figments of our own imaginations — to gleam ideas for real life problems. Though zombies fall on the extreme side, examining statistical models on how to fight infection (fictional or real) may provide the answers we need, and therefore, is a step in the right direction.

Now, if only someone would start studying Ferris Bueller to figure out how to get kids to stop cutting class.