Why don't Canadian universities want to talk about sexual assault?

Nearly one in five women will be sexually assaulted as students. So why are those university policies a 'patchwork,' at best? 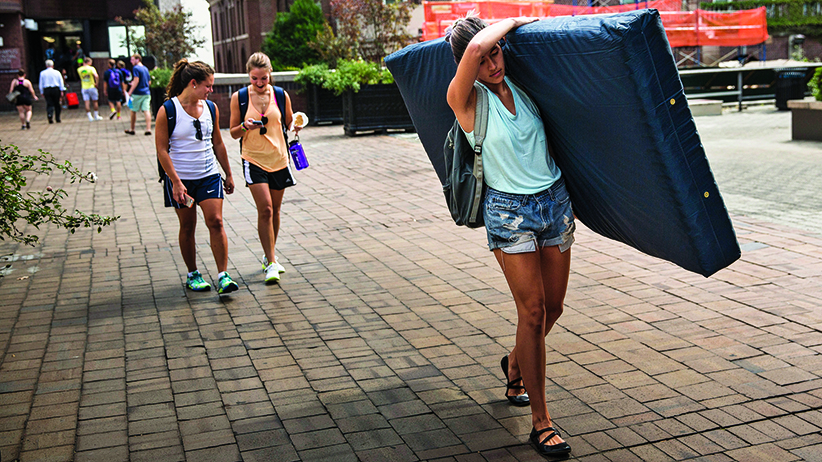 Emma Sulkowicz lugs the mattress she says she was raped on around Columbia; her complaint alleges the school mishandled her case. (AP)

When the man who Columbia University student Emma Sulkowicz says raped her in her dorm bed two years ago was found not guilty in September, the visual-arts student started lugging her mattress around campus; she says she won’t put it down until he is expelled. Known around the world as “mattress girl,” Sulkowicz is an icon in the battle against sexual assault on university campuses, and one of 23 students from Columbia and Barnard who filed a federal complaint against their schools alleging their sexual-assault cases were mishandled. Since then, celebrities including Jon Hamm and Kerry Washington have joined the White House’s new “It’s On Us” campaign, which encourages everyone, especially men, to prevent on-campus sexual assaults. Now, California has passed its “Yes Means Yes” law, which makes schools evaluate cases in relation to a new definition of consent as “an affirmative . . . agreement to engage in sexual activity” or risk losing their funding. And the U.S. Department of Education is cracking down on universities for underreporting cases, taking too long to deal with them and not supporting victims in a sensitive way.

Here in Canada, the story couldn’t be more different, and more the same. Very few Canadian universities have policies or university-funded services that deal specifically with sexual assault, even though the prevalence is the same: nearly one in five women will be sexually assaulted as students, according to Charlene Senn, a women’s studies professor at the University of Windsor who is an expert on rape prevention. While some universities have tried to address the problem, new cases are making headlines every month, not to mention incidents underlining a pervasive rape culture on campuses. Last month, Carleton students donned “F–k Safe Spaces” T-shirts, and frosh at both St. Mary’s University in Halifax and UBC in Vancouver were castigated last year for an offensive chant about non-consensual underage sex.

There is a patchwork of policies on Canadian campuses, according to Jessica McCormick, national chairperson for the Canadian Federation of Students, but the facts are clear: Women aged 15 to 24 experience the highest rates of sexual violence in the country, according to a 2013 Statistics Canada report that relied on police-reported data. It also found that women reported 460,000 incidents of sexual assault to social-service providers in 2009, but less than 10 per cent were reported to the police.

Meanwhile, Canadian universities are not required to make public or even keep track of the number of sexual assaults reported to them, making it difficult to get accurate data. For example, campus security at Queen’s University reported one incident of sexual assault in 2013, according to its website.

Universities typically resist conversations about the issue for fear of negative publicity and how it might affect their reputation and ability to raise funds. But in a rare move, McGill University hired Bianca Tétrault earlier this year as its first harm-reduction liaison officer once they discovered three McGill football players had been charged in 2012 with forcibly confining and sexually assaulting a Concordia student. (The cases are ongoing.) Since McGill doesn’t have a sexual-assault policy, that will be Tétrault’s first priority. Any comprehensive university policy needs to have a clear definition of what sexual assault is and a “pro-survivor approach,” she says, meaning that academic accommodations, counselling and other support systems are available for victims from the minute they come forward.

While the University of Windsor also has no sexual-assault policy, its Bystander Initiative, led by Senn, is one of the most respected examples of rape prevention on campuses in Canada. Through workshops, students learn how to recognize sexual assaults, intervene appropriately and support survivors. The university funded the project in 2010, shortly after a bunch of male students were caught, more than once, peering into residence bathrooms as female students showered. But Senn says the university still has a lot of work to do. “I was horrified when I recently typed in ‘sexual assault’ and ‘rape’ into our website and found you don’t get any information telling you what to do or where to go if you’ve been assaulted,” she says. “It’s a very confusing process to find resources.”

It’s even more difficult when professors and staff are nervous about speaking publicly about their sexual-assault research. Liz Quinlan, a sociology professor at the University of Saskatchewan, is leading a study on sexual-assault policies at Canadian universities, but she is hesitant to talk about her work because it’s “impossible to anticipate what the consequences might be.” Her daughter, Lakehead University sociologist Andrea Quinlan, another researcher in the group, says, “We’re working in a climate where some of us are having to reapply to the very universities we’re now speaking about in our research; it carries some risks for us in terms of the stability of our employment.”

In 2009, Joanne Horsley was the victim advocate at the University of Saskatchewan, the liaison between those who had been sexually assaulted and those they had to notify, from professors to campus police. Just 24 hours after she criticized her employer, the student union, for a proposed to change her job description, she was fired. A few months later the position was eliminated. Now the Women’s Centre is its “primary vehicle for sexual-assault awareness on campus,” says the union’s general manager, Caroline Cottrell. Horsley says they were afraid of bad publicity or being sued, but Cottrell says Horsley was fired for “providing counselling and other services that could only be provided under clinical supervision,” and that exceeded Horsley’s mandate. Lawyers had indeed advised the student union it would be liable for Horsley’s actions, says Cottrell.

In Ottawa, Julie Lalonde, a women’s rights advocate who teaches workshops on sexual violence to high school and university students, says schools have a lot to gain by trumpeting sexual-assault services and policies rather than burying them. When she started her master’s degree at Carleton University in 2007, she co-founded a group that lobbied the school for a sexual-assault centre after a female student was attacked in a lab. It took six years for the university to open one. “It’s ironic that campuses don’t want to talk about sexual assault because they say it’s bad for their reputation,” says Lalonde, who also helped run a sexual-assault hotline for Carleton students. “Campuses are motivated by student enrolment and retention rates, yet we saw that students who were sexually assaulted on campus and not supported wouldn’t come back. You improve your retention rate when you offer robust support services.”

Even though education in Canada is not a federal responsibility as it is in the U.S., there are other ways Canadian universities can be monitored and held accountable when it comes to sexual-assault cases. Lalonde says provincial governments could withhold funding from campuses that don’t have adequate support services in place. She is now forming a national group for students, separate from student unions, dedicated solely to addressing sexual assault on campuses. “Such a group is as important as having a federal oversight mechanism in place. Students need to be supported in making this happen,” she says.

Through its Campus Safety Audit, the Toronto-based anti-violence non-profit METRAC has identified five factors that improve safety for female students and others at risk of sexual violence, relationship abuse and harassment.

METRAC has identified universities that are taking promising steps toward reducing gender-based violence: