Where to get the best hangover breakfast, best giveaway, and more 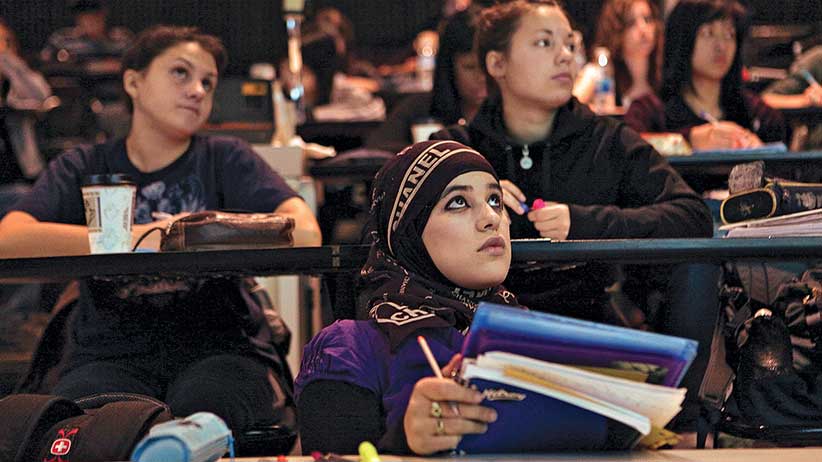 University of Montreal. No Credit.

Best place for a nap: The top floor of the Arts and Humanities Library. Books and silence: the best combination to fall asleep.
Best cheap lunch: Every broke student knows the Anthropology café
Best hangover breakfast: You had a hard night? You don’t want anything fancy, just two eggs, bacon and potatoes to get back on your feet: Go to Blanche Neige restaurant.
Best place to study: There are many cafés on Côte-des-Neiges street with a relaxed atmosphere
Worst place to study: Don’t even think about studying in the cafeteria
Best giveaway: CISM is the UdeM students’ radio station, broadcasting a large variety of music and original programs, and you can listen to it anywhere in Montreal on 89.3 FM
Best live-music venues: Every new year starts with a free outside show on campus with the most popular rap and pop groups of the moment
Best spectator sport: UdeM is home to the best Montreal college football team, les Carabins
Official school motto: ‘Fide splendet et scientia,’ which means ‘Let it shine with faith and knowledge’ (or ‘Take Latin class’)
Most notorious bus route: 51 Édouard-Monpetit brings you from the far east building to the far west one
Best campus event: Le Carnaval d’hiver, a competition between every faculty
Best cultural event: Ciné-Campus presents a different movie every week in a wonderful movie theatre

With its 68,000 students, the Université de Montréal (UdeM) is the biggest university in the province. Nevertheless, UdeM has one of the calmer campuses in Montreal. It is located at the foot of the peaceful Mount Royal, an emblem of the city and far from the agitated downtown. It is still easily accessible: It’s a short subway ride from the rest of the city. Built like an old university, the main campus is a long series of edifices facing each other, with the occasional interior courtyard, like the Place Laurentienne. At the centre is the Roger-Gaudry building with its famous tower overhead. The campus is disconnected from the urban fabric, making it an island of calm in the sea of traffic and stress that characterizes every big city.

However, just because it’s quiet doesn’t mean life is boring. There is a lot of space dedicated to social activities, spreading out into almost every building. And the number of cultural and sporting activities is almost incalculable—just like the number of parties. While student associations on campus are generally more devoted to supporting and celebrating academic success than political issues, there are still lots of groups that fill the calendar with events offering opportunities to make some friends.

Extras
Every year, le Carnaval d’hiver takes place, a unique three-week competition between faculties in sporting and artistic events. But having fun isn’t everything: The oldest French university in Montreal has an intellectual tradition reflected in its many research programs, including health and chemistry. Consequently, there are many research opportunities for students.

Physical activity is essential to drive intellectual success. That’s why the CEPSUM, Quebec’s biggest university multi-sports centre is here. With plenty of classes and intramural leagues offered for free or at a very low price, there’s an activity for everyone.

Local Vibe
Montreal is historically a jazz city and hosts one of the largest jazz festival in the world. But the city has become more and more open to hip-hop culture. In fact, the RapKeb (Rap+Quebec) movement is creatively thriving these days. Lyrics are mainly in French but borrow a lot from English, which perfectly represents the duality of our city. Rap’s ascent is perhaps driven by the activist spirit of the city. Inhabited by hopeful young people, Montreal has long been a centre of social and political activism.

Montreal is also a sports city, with one of the world’s most prestigious hockey teams. And, as a result of the city’s cultural diversity, with lots of soccer-loving countries represented, the local soccer team now boasts some of the biggest crowds in North America.

The Skinny
The very professional student newspaper, Quartier Libre, keeps you informed about all the university news and events.