Where to find the best place to nap and more 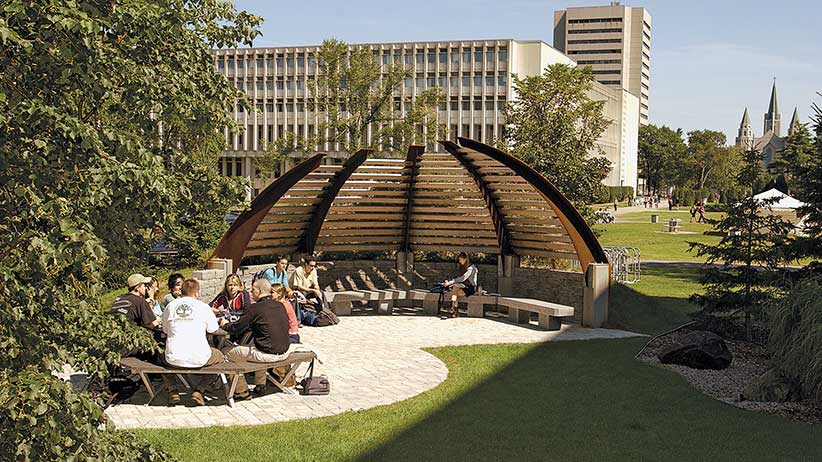 Unofficial school motto: ‘The village in the city’
Best place for a nap :The office of your program’s club
Best cheap lunch: Saveurs Campus in the Alphonse Desjardins building
Best hangover breakfast: The cafeteria in the Ferdinand-Vandry building
Favourite watering hole: Le Pub Universitaire
Perks of living in this town: The historical aspect of Quebec City
Best place to study: The third floor of the Louis-Jacques-Casault building
Weirdest tradition: Looking for the hidden stuffed ostrich in Casault. Some say they’ve found it, but its existence is still a mystery.
Best campus event: La grande soif, a huge party at the end of December
Best giveaway: Promotional items at the office of your program’s club. Sometimes companies sponsor events and you can grab some of their free stuff.
Best live music venue: The Grand Salon, on campus, or L’Anti, downtown

More than 50 years ago, the government of Quebec decided to move Laval University from the provincial capital’s downtown to the district of Sainte-Foy. Since then, just about everything has been built or opened to satisfy students, and it’s not disappointing. On and around the campus, you can find the usual groceries, residences and libraries, but also theatres, bowling alleys, hairdressers, and even a tattoo shop. But beyond all the amenities, Laval University is simply a good campus to live on and a nice place to study.

One of the many great things about this university is the cultural diversity of the student body. People from around the world come here to study, and they all bring something new to social life on campus. Also, the university administration has worked hard in the past few years to reduce our environmental footprint. It may sound like something that doesn’t have an impact on students’ lives, but we can actually see our campus’s efforts to become greener, and that does make it more pleasant to live here.

Among all the new green things at Laval, one standout is the new stadium. In the training room, exercise machines are equipped with personal TVs. An indoor soccer field with grass was also built in 2011 to help the team practise in winter. The university has been particularly active in promoting sports, and the performance of the Rouge et Or teams doesn’t lie. In the past two decades, our football team has won eight national titles.

Extras
Strange as it may seem, Laval University has just a few real bars on campus. But that doesn’t prevent anyone from having a great night out, because there are so many events every week.

Local Vibe
The university is a 10-minute bus ride from Quebec City’s core. Old Quebec is part of the downtown area, and it’s a great place to enjoy a drink, surrounded by the French battlements. You can also take a walk along rue du Petit-Champlain, voted best street in the country in 2014 by the Canadian Institute of Planning. Whether you’re passionate about history or not, you’ll love the old European atmosphere.

The Skinny
Follow the different Facebook pages of the various student clubs. Each program has its own club, and they all keep students updated about what’s happening on campus/