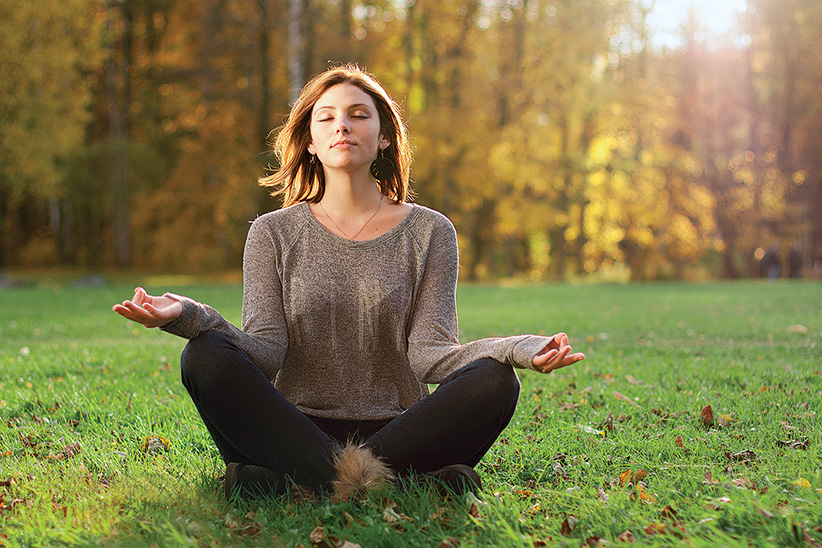 Breathe in, breathe out: Mastering the art of relaxation is a worthy pursuit for students

Vancouver’s Dzung Vo, board member with the Mindfulness in Education Network, often tells this story: “I worked with a 19-year-old who spent the whole time on her phone,” says the author of The Mindful Teen. “I didn’t think she was getting anything at all.” But one day, when she needed a routine medical procedure, she was so anxious that she was told she’d have to reschedule. “Instead, she said, ‘Wait, let me try that thing Dr. Vo taught me.’”

She closed her eyes, imagined the breathing practices she’d been rolling her eyes at, and calmed herself down. “She realized she had this power she can tap into any time,” says Vo. “I learned not to assume that someone’s getting nothing out of this.”

A bigger lesson, says Vo, is that “mindfulness doesn’t necessarily look like it used to.” Old notions of what meditation is—namely old people, sitting still with their eyes closed, doing nothing—are being replaced with what he calls “informal mindfulness.” “This is incorporating a non-judgmental awareness into your everyday life, and young people are actually really good at it.” A Grade 12 crash course, he says, would be a perfect time to equip soon-to-be university students with strategies to manage life at increasingly stressful and competitive campuses.

The last decade has seen the practice and study of mindfulness explode into the mainstream, but nowhere more so than at universities. A growing body of research has linked the practice to reduced stress and anxiety, and increased happiness and empathy. Paired with neurology and brain scan studies, research applications seem limitless across Canadian campuses. Apps, inventions, courses, groups and initiatives are popping up at just about every one.

Two thousand students across 11 universities have joined the Mood Check Challenge and signed up for the app, which twice daily prompts participants to check in. “It asks: What are you doing? Who are you with?” explains Peter Cornish, associate professor and director at Memorial University’s Student Wellness Centre. “Then it graphs, over time, how your mood relates to what you do.” Most of us have vague ideas of what makes us feel good or bad, he says, but “as soon as you track systematically, you’ll really start to see the patterns.”

Mood Check is part of a broader mindful initiative called WellTrack, which launched in early 2015.* It too seeks to blend mindfulness with technology, this time via a daily email. “Every day you get a tiny bit of content—not a lot, it’s very manageable—to help make mindfulness a habit,” says Cornish. Their version of “informal mindfulness” suggests choosing a daily task—brushing your teeth, for example—and adding mindfulness to the routine.

Soon enough, says Cornish, “you’ll find you’re doing it every time without thinking about it. Then you get good at using it, almost automatically, and can reach for the same skill at any time.” Right before an exam or big presentation come to mind.

Students are great candidates for mindfulness, but professors too are feeling the pressure and looking for solutions. For 12 years, the University of PEI has offered a mindfulness-based stress management course, an eight-week (2½ hours a week plus one silent retreat) class of about 20. “For some reason, we have a whole lot of professors enrolling,” says teacher Frank MacAulay. “The demands in a university are very high and the resources are limited, so profs are feeling the pressure too.” Chronically stressed people have a defaulted fight-or-flight stress response that MacAulay’s class aims to disrupt. “The intent is to recognize that, acknowledge it and relearn your response.”

Traditional mindfulness courses like MacAuley’s are popular, as are sitting groups like Acadia University’s—a free half-hour mindful meditation de-stressing event held every Wednesday afternoon in the library. But for students seeking a more individual experience, Simon Fraser University offers the Sonic Cradle. “You’re basically in a near pitch-black box in a hammock chair, as if you’re floating,” says inventor and professor Diane Gromala. Non-invasive biofeedback devices measure breathing, heart rate and galvanic skin response (clamminess), while individualized soundscapes play from eight speakers. “As you breathe, the sonic cradle is capturing and composing sounds to enhance your meditation. The result is a very primal, almost in-the-womb experience that’s very comforting.” Four studies have found the Sonic Cradle reduces anxiety and invokes calmness; Gromala’s problem now is getting participants to exit once their hour’s up.

“There are just so many ways that mindfulness is being incorporated across campuses and in everyday life,” says Vo. Students, educators and researchers are embracing it—even when you least expect it. “We teach walking meditation, for example, which is a great way to transform a daily walk to class into a time where not only are you not stressed, but you’re actually de-stressing,” says Vo. Next time you see a student tapped out with earplugs in, don’t make assumptions. They could be meditating, and you should too.

Correction: A previous version of this post described Mood Check as an initiative of Mindwell, which rolls out next March, and not WellTrack, which has already launched.