University of Lethbridge: student tips for surviving life on campus 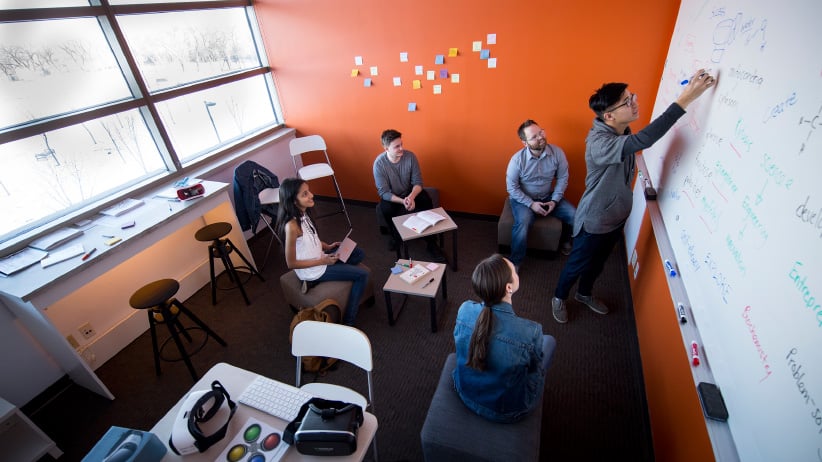 Best place for a nap: Bottom floor of the library, FC section
Best hangover breakfast: The Rich
Favourite campus food: Wild berries in the coulees at the edge of campus
Favourite watering hole: Old Man River
Perks of living in this town: You’re not in Medicine Hat
Where to live: London Road
Best giveaway: Ecumenical Campus Ministry grocery giveaway every semester
Weirdest tradition: The grocery giveaway (we just keep this going and pretend we don’t have a student poverty crisis, huh?)
Coolest elective: Sign up for an independent study course and make your own!
Best campus events: Graduation
Best live music venues: The Owl
Best spectator sport: The poster sale every semester. Undergrads have horrible taste.
Unofficial school motto: ‘Medicine Hat’s too small, but Calgary’s too big’
Most notorious bus route: All of them (the transit system is bad here)
Most original social event: CKXU Sleeveover Party

If the University of Alberta is the scenester at the party, and the University of Calgary is the nouveau riche party person in a cowboy hat and Juicy sweats, then the University of Lethbridge is their shy outdoorsy cousin. The campus is located on the west side of Lethbridge, with the coulees on one side and suburban sprawl on the other. The points program at the Coffee Company will keep you well-caffeinated during your academic career. The Meliorist (pronounced mee-lyo-rist) is the beautifully designed student magazine that you’ll likely mostly pick up for the Sudoku puzzles. The Indigenous Students’ Union was just established this year and has a stronger mandate of student advocacy and intercultural outreach than its predecessor. Oh, and there’s a very expensive science building that’s probably going to be finished by the time you get here (fingers crossed), so that’s something to look forward to. The neuroscience building is super-cool—it’s got a very fancy privately owned MRI machine that the department gets to use for studies outside of office hours. (And they’re always looking for volunteers if you ever want pictures of your brain.)

Extras
The University of Lethbridge Art Gallery hosts all kinds of events: knitting circles, free tea and cookies, artist talks, drawing bars. The museum is free and it’s awesome and you should go all the time. Ecumenical Campus Ministry does a lot of great work for the student body, including but not limited to handing out groceries every semester. That’s run by Erin Phillips; say hi if you see her on campus. We also have an indoor climbing wall that rules school. Also, the coulees are a great place to go for a light hike or a nice trail run. Bring a windbreaker, though—this is the windiest city in the country.

Local Vibe
The Owl and the Slice are the primary music venues. The Southern Alberta Art Gallery (SAAG) is a great place to hang out when there’s a new exhibit or on the first Friday of the month when there’s a DJ and board games. Everything is closed on Sunday. In August, the park downtown is one big, free outdoor music event called Love and Records. CKXU, the campus community station, is kind of the scenester hub and that’s where you’ll meet a bunch of musicians and artists in town. Blueprint Records is the local record store that doubles as an art and music venue. Also, Kapow, the local comics store, has board games on Tuesdays and D&D on Wednesdays.

The Skinny
LA Beat (labeat.ca) is a throwback to the ’90s, when Lethbridge thought it would be a good idea to call itself “L.A.” and not seem at all thirsty and lame.