University of Victoria's Indigenous law degree is a world first 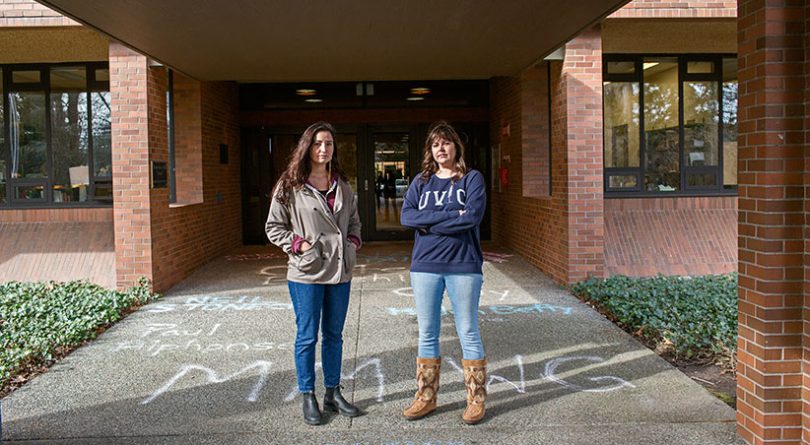 The widespread view of early European settlers was that Indigenous people were, and always had been, a lawless people. This view, many contend, still influences a prejudicial attitude by the Canadian government and courts. But despite the ravages of colonialism, the Indigenous systems of law and justice survive in their communities. “Indigenous communities have been practising their own laws in their own ways forever. And it’s not as though they have gone away,” says Jessica Asch, research director at the University of Victoria’s Indigenous Law Research Unit (ILRU). There may be gaps and fractures in Indigenous law because of colonialism. But their approach to justice still functions on the ground, says Asch. “It is seen. It is lived. It exists.”

Now, thanks to extensive research conducted by the ILRU, Indigenous approaches to justice will also be taught—to law students at UVic.

Beginning in September, the University of Victoria will offer the world’s first Indigenous professional law degree program. Law students can earn not only the usual juris doctor (JD) in Canadian common law, but also simultaneously study the various legal orders long used by Indigenous people across Canada. After four years in the intensive program, those students would also earn a juris Indigenarum, or JID.

In conducting research to frame Indigenous ideas of justice in a common law context, explains Asch, the ILRU looked at oral narratives—often expressed through mythical stories—of legal traditions in various First Nations. “For example, if we are working with the Cree Nation, we will look at their oral narratives and analyze them using the methods we might use in law school when we look at judgments.”

The JID program would have been impossible without that grassroots research by the ILRU with Indigenous communities. The unit is led by Val Napoleon, director and Law Foundation Research Chair in Aboriginal Justice and Governance at UVic. Napoleon—of Dunneza, Cree and Saulteaux heritage—helped found the ILRU in 2012 in partnership with the Truth and Reconciliation Commission of Canada. It’s the only research group in Canada working to restate and revitalize Indigenous law in Canada by helping First Nations articulate their own legal principles and approaches to justice and fairness on their own terms.

“UVic’s Indigenous law degree program,” said Napoleon in a press release, “will equip our students to take up that work at every level—local to national, private to public, and beyond. This is the very first law degree of its kind, and it is going to be a vital part of rebuilding Indigenous law to meet today’s challenges.”

In recent months, Indigenous communities have been voicing increased outrage at what they say are systemic and oppressive prejudices in the Canadian criminal justice system. The Feb. 9 second-degree murder acquittal of Saskatchewan farmer Gerald Stanley in the shooting death of Colten Boushie, a 22-year-old Cree man, and the acquittal just 13 days later in Winnipeg of Raymond Cormier on a second-degree murder charge in the high-profile death of Tina Fontaine, a 15-year-old from the Sagkeeng First Nation, sparked protests across the country.

An Indigenous law degree will help future lawyers reflect and use Indigenous philosophies in many fields of law. But Jeremy Webber, UVic’s dean of law, says the program’s real impact will be in areas outside of Canada’s current criminal justice system, as increasing self-governance allows Indigenous people to exercise more power over issues such as land and resources.

“There are ways in which this will help,” explains Webber. “But this is not primarily about how Canadian courts can recognize Indigenous law. Its primary role will be assisting in the rebuilding of the institutions in Indigenous communities.” For instance, says Webber, if a First Nation wants to establish a legal framework for a land-management scheme, “they don’t want to just copy over a land-management scheme that’s used by a local municipality. They don’t want self-government for that. They want it so a land management structure can represent their values, and flow from their own legal principles and procedures.”

About 25 per cent of UVic’s law students come from Indigenous backgrounds. The new JID program, says Webber, will especially help them. But regardless of background, it will assist all UVic law grads in operating in a new era where governments and corporations—thanks to recent Supreme Court rulings—must do more to consult with and respect Indigenous traditions when they interact with them.

Whether a future lawyer works in government, with law firms or as in-house counsel, they “need to know how to operate effectively, respectfully and in a way that really connects with the communities. One way to do that is to understand the principles, the practices, the legal framework, which still has resonance in those communities,” says Webber.

To train those soon-to-be lawyers, the program’s curriculum will rely heavily on the ILRU’s work. In co-operation with seven First Nations, ILRU student researchers travelled the country to speak with elders and collect Indigenous oral traditions of law. They then analyzed them using the same methodologies used in law schools to articulate common law judgments and precedents.

For example, in a Secwépemc story called The War With the Sky People, two chiefs assembled their animal warriors to conquer a people who lived in the sky. As they fired arrows upwards, they simply fell back. Then a wren fired an arrow into the sky, which stuck. Other small birds fired one arrow after another into the end of the previous projectiles, forming a ladder of arrows extending from earth to sky. The earthbound warriors, comprised of fish and other creatures, clambered up the arrow-ladder to fight the Sky People. Meanwhile, the two chiefs, who stayed below to guard access to the arrow-ladder, began to argue and fight, accidentally knocking down the ladder. Stranded above, their warriors were defeated.

For the Secwépemc people, who live in British Columbia’s Shuswap Lake region, the Sky People story is a form of case law illustrating several legal philosophies. For example, it shows co-operation between communities is sometimes necessary to address common interests.

The stories collected and analyzed by the ILRU will not just inform the JID program, says Asch. The research will also be used by First Nation communities for their own purposes. “That might be their next step in maybe creating a [legal] code or a program for a school, or a policy or other legal instrument based on that resource. And it would be rooted in Indigenous ways rather than just mimicking colonial law.”

Darcy Lindberg, a UVic law grad, admits he’s “bummed” the JID program comes too late for him. Lindberg, 39, grew up in Wetaskiwin, AB, with relations in the nearby Samson Cree Nation.* He practised law for three years and is currently back at UVic studying for his Ph.D. in law. He recently helped organized a sit-in at UVic as a member of the  Indigenous Law Students Association to help bring awareness to the faculty and students about the systemic challenges in Canadian justice for Indigenous people.

Lindberg says the new degree program will help the law community understand the common law in new ways, reinforcing the fact that Canada is a “legal pluralistic society.” It will also help close the “huge gaps” in the practice of Canadian “Aboriginal law” when it comes to how Canadian lawyers and courts deal with issues affecting Indigenous peoples. Not to be confused with “Indigenous law”—those self-governing oral laws that rule and judge behaviour within First Nations—“Aboriginal law” is how existing Canadian common and civil law are practised when they intersect with Indigenous communities, for instance in land-use negotiations and issues.

“Practically,” says Lindberg, “this degree is going to help people who are going into this kind of law practice to think about how they can work with communities, and stand up for their laws.”

Correction: An earlier version of this story misstated where Lindberg grew up.

MORE ABOUT UNIVERSITY OF VICTORIA: