For the sixth straight year, UofT tops the Maclean’s ranking as Canada’s top school by reputation 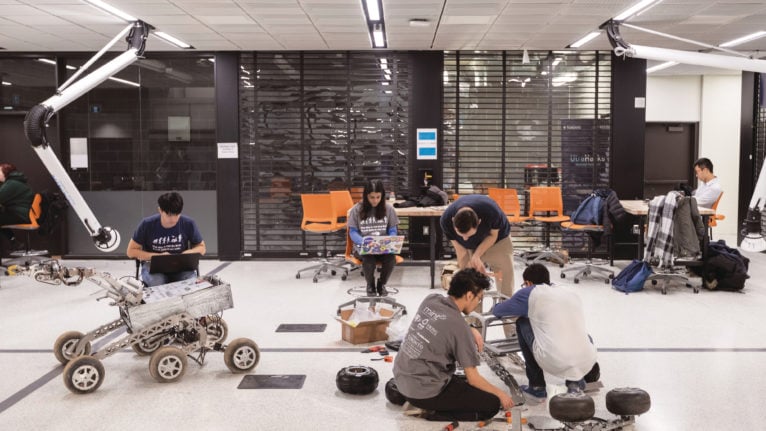 Students at the Myhal Centre for Engineering, Innovation and Entrepreneurship (Courtesy of Nick Iwanyshyn/University of Toronto)

This marks the University of Toronto’s sixth straight year atop the Maclean’s ranking as Canada’s top school by reputation.

The school has had almost 200 years to build its stellar reputation. As the seventh-oldest university in Canada, U of T was founded in 1827 by a royal charter issued by King George IV. Since then, the university has produced numerous prestigious graduates, including four Canadian prime ministers and Nobel laureates such as Lester B. Pearson and Frederick Banting. Its graduates are also behind an eclectic range of inventions, such as the electric wheelchair, the alkaline battery, the Canadian Sphynx cat and IMAX.

Over the last century, the impact of U of T’s graduates and research has come full circle. In 1919, less than a year after the Spanish flu pandemic first hit Toronto, U of T alumnus William Knapp Buckley created Buckley’s cough medicine, which fought the strong cough brought on by the virus. Now, the school is supporting more than 30 research projects contributing to the global fight against COVID-19.

U of T is a globally renowned research capital and has one of the largest research networks in the world. Its library system is the third largest in North America and houses 25 million items in 44 libraries. The school receives more than $1.2 billion in research funding every year, and its faculty produce more research and scholarships than almost any other institution. Out of all the schools in North America, only Harvard University publishes more academic papers than U of T. This year (and last), the Center for World University Rankings named U of T third in the world for research performance.

U of T tends to defend and make strides in its high rankings. It was again named Canada’s top-ranked school by QS World University Rankings this year and rose four spots to place 25th in the world. For the second year in a row, Times Higher Education ranked U of T first in Canada and 18th in the world. This global standing attracts a significant number of international students. In the fall of 2019, almost a quarter of the school’s more than 93,000 students came from nearly 160 countries. Its graduates join more than 600,000 U of T graduates around the world.

The school is also a hotspot for acclaimed entrepreneurs and their start-ups; it has 11 accelerators and incubators across its three campuses. U of T has launched more than 500 companies in the last 10 years, and they have amassed more than $1.5 billion in investments. In last year’s ranking of the most innovative universities, Reuters placed U of T first in Canada and 27th in the world, a major leap from its spot at 46th in the world just two years earlier. Start-ups by U of T graduates and faculty continually make headlines. They include BlueDot, the AI software company that was the first to notice and warn the world of what later became known as COVID-19.