This year, the primarily undergraduate school in Sackville, N.B., opens a new arts centre and welcomes its first Indigenous elder-in-residence 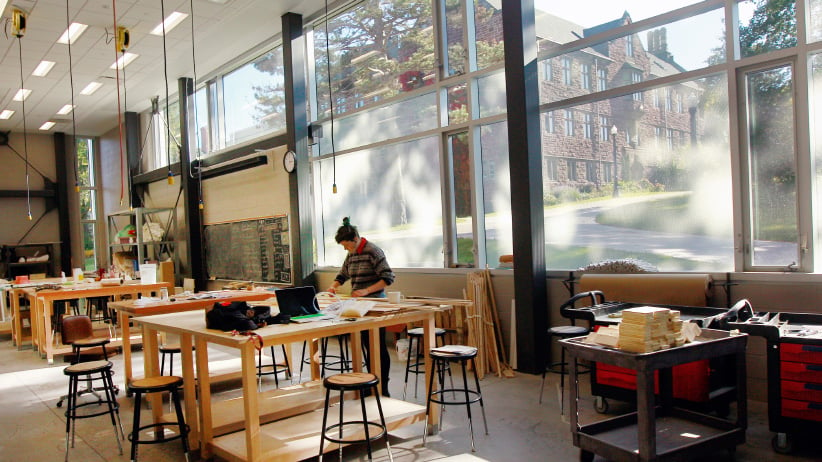 When you can walk completely across campus in 10 minutes, it’s easy to get involved in university life. That’s what students love about Mount Allison University—and one of the reasons it’s been ranked top undergraduate school a total of 19 times. Another reason: the school is devoted to the undergrad experience. With a student body of just 2,300 and a high student-to-teacher ratio, Mount Allison prides itself on having a close-knit community.

Located in Sackville, N.B., the campus feels quaint and welcoming. Ivy-covered red-brick buildings dot the verdant grounds. A tranquil pond that turns into a skating rink in the winter serves as a popular gathering spot. Students can browse the works of famed artist Alex Colville (an alumnus) at the artist’s studio, which was donated to the university, and at the Owens Art Gallery, the oldest university art gallery in the country. With roughly 80 per cent of undergrads living in residence, campus life is central to the Mount Allison experience, although downtown is only five minutes away.

MORE: Create a custom university ranking based on what’s most important to you

Recently, the 178-year-old school has been dedicated to promoting and supporting Indigenous cultures. In 2016, dubbed the Year of Indigenous Knowing, students and faculty were encouraged to learn about and work toward reconciliation. A new designated Indigenous gathering space, called Mawita’mkw, was opened on campus and serves as the base for Mount Allison’s first elder-in-residence, Gilbert Sewell from Pabineau First Nation in New Brunswick. The school also launched a new Indigenous studies course and advisory council. In 2017, called the Year of Indigenous Action, the university continues its efforts by increasing outreach to Indigenous high school students and inviting Indigenous speakers, including Ian Campeau of A Tribe Called Red and Perry Bellegarde, national chief of the Assembly of First Nations.

Mount Allison boasts top-notch liberal arts and science programs, with a focus on collaborative, hands-on learning. In 2014, the school opened the Purdy Crawford Centre for the Arts, its first new building in more than three decades. The modern-looking space includes studios, galleries and a 100-seat theatre. The new Centre for Environmental Innovation, slated to open in 2018, will be an environmental science facility that will further the study of climate change and its effects on marine and freshwater ecosystems.

Students are encouraged to practise their skills beyond campus borders as well. One example is the Community-Based Participatory Research Methods class, during which sociology students volunteer with Sackville organizations. Another experiential learning success story: commerce students in a 2016 entrepreneurship class opened and now operate Sackville’s first nanobrewery. And most recently, a student group was awarded $20,000 to help develop a company that turns waste like potato peels into sustainable building materials.