University students can now earn badges to recognize their merits 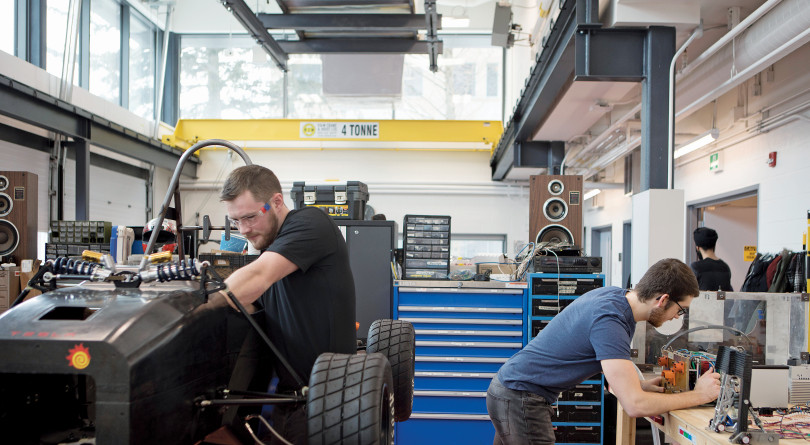 For the past academic year, Javaria Asif, a third-year engineering student at McMaster University, has been working on an extra-curricular project aimed at enlivening the urban landscape in Hamilton, Ont. She and her five-member team, coached by upper-year students and faculty, collaborated on a weekly basis with local government and non-profit groups. The team gathered research and consulted local citizens before identifying a youth-friendly project— a possible rooftop skating rink on a downtown car park close to a bus terminal.

In April, the 20-year-old also will receive a digital “micro-credential” recognizing the skills she honed working on the project, including research, entrepreneurship, communication and collaboration. “It is a record that says I put in all this time and effort and did something useful for the community,” she says.

Her participation in the extra-curricular work came through MacChangers, an engineering faculty program that selects 45 undergraduates a year to tackle global issues at the local level. She is among those excited about her faculty’s move to adopt micro-credentials, with more planned in the next two years. It’s an approach designed at creating a new currency of academia, one which stirs both excitement and unease.

Advocates are keen for a way to paint a more complete picture of student achievement, recognizing skills and expertise demanded by employers but usually missing from a conventional academic transcript. But big questions remain about how to define, authenticate and evaluate micro-credentials in a standardized fashion understood by students, institutions and employers.

Asif, who aims to become a civil engineer when she graduates in two years, says the extra-curricular experience has broadened her perspective. “Now I think I want to be someone who looks at things not just from an engineering point of view but from a people point for view,” she says. “Engineering is all about solving problems and those problems emerge from people.”

Leading the charge on micro-credentials is Ishwar Puri, McMaster’s engineering dean, who sees them as a valuable tool to produce well-rounded graduates with technical knowledge, soft skills and a social conscience. “We really want to recast engineering as the liberal arts degree for the 21st Century,” he says. “We have to find a way to align that aspiration with the content that students take.”

Uncertainty over the future of work—and the skills required for jobs that may not yet exist—is one factor driving experimentation with micro-credentials in post-secondary education. Employers want assurance that future graduates have technical knowledge and broad competencies to make them adaptable in an technology-driven economy, says David Porter, chief executive officer of ecampusOntario, a government-funded non-profit agency. His organization recently funded several pilot projects in alternative forms of credentials at post-secondary institutions.

“Most of the work in the micro-credential and badging area is really tied to furthering student opportunity for employment and [meeting] workplace needs,” he says. Because the micro-credentials are digital, employers can track specific skills delivered and certified by a college or university. “It gives us the opportunity to represent what the student knows right down to the competency,” Porter says.

Like others, Porter acknowledges that loose terminology creates confusion over micro-credentials and badges—terms sometimes used interchangeably. First developed by industry more than 20 years ago, the credentials initially recognized technical competencies gained through online training courses that might last a few hours, days or longer.

Across the country, post-secondary institutions are now testing micro-credentials and badges as a supplement to the academic transcript, with a focus on volunteer activities, internships and other activities that complete a picture of the whole student. If adoption of micro-credentials is a 10-mile journey, Porter currently puts universities at mile two of the effort. “It’s not so much resistance,” he says of the response so far. “It has more to do with ‘how do we fit this into the mission and mandate we already have?’”

At Western University, where six academic units were involved in the ecampusOntario pilot projects, officials weigh next steps with caution. “We are in the early days for micro-credentials at all in higher education,” says John Doerksen, vice-provost of academic programs.

He describes the micro-credential movement as “a really important initiative,” but says questions remain on how to describe, authenticate and digitally store the skills represented in a badge or micro-credential. “For all the plodding aspects of degree development and quality assurance with regular degrees, the one thing that holds [in universities] is a very structured focus on quality,” he says. “There is no such framework for micro-credentials.”

What that framework might like poses a challenge for universities. “How do we incorporate the development of these new kinds of credentials into our curriculum process?” asks Gavan Watson, director of the Centre for Innovation in Teaching and Learning at Memorial University. “I know that is boring stuff but if an institution doesn’t agree that a credential is valued and that it meets academic standards or rigour then these things [alternative credentials] are going to be dead on arrival.”

McMaster’s Puri says skepticism, though valid, is “the biggest challenge” to wide-scale implementation. His faculty, though, is moving ahead on several fronts following introduction of its first micro- credential this spring.

This fall, MacChangers students will be eligible to receive an additional micro-credential for completion of six designated courses tied to the United States National Academy of Engineering Grand Challenges Scholars Program aimed at equipping graduates to solve “wicked” global problems (McMaster is the only Canadian participant).

Also in September, all engineering students will be eligible to earn micro-credentials, based on hands-on extra-curricular activities vetted by the faculty. The activities will need to meet defined learning outcomes in areas including research, creativity, working in diverse groups, entrepreneurship and social consciousness. 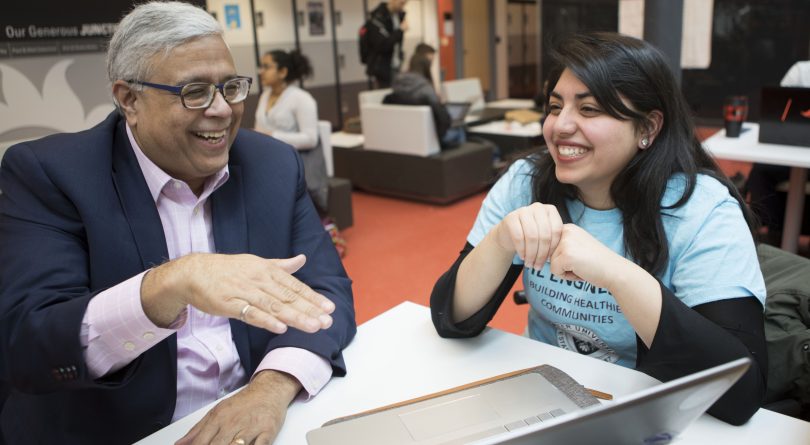 Javaria Asif shows her team project to dean of the Faculty of Engineering Ishwar Puri at the Gerald Hatch Centre. (Photograph by Chloë Ellingson)

That appeals to fifth year mechanical engineer Riley Dunn, who leads a diverse team of students from engineering and other disciplines working on an all-electric, Formula 1-style car for an international competition this summer.

Dunn says his role in the extra-curricular car club has expanded his understanding of what it means to be an engineer. “It has given me confidence that I can do things once I graduate,” he says. The out-of-class experience, he adds, “is almost equally beneficial as my schooling.”

Working with the Massachusetts Institute of Technology and others, McMaster plans to use a blockchain platform for students to store micro-credentials on an app downloaded to their phones. In effect, students would be custodians of the qualification without the need for verification by a university register.
“We wanted to use an open source platform,” says Puri, with employers able to “instantly verify” information about a student’s achievements.

In 2016, Winnipeg-based Learning Agents, an education technology firm, developed a national paid platform for organizations to store and share their badges, with free storage for individuals to post credentials. Learning Agents president Don Presant says alternative credentials appeal to students and employers. “It’s to make learning more visible, and to make the kind of skills that typically are poorly recognized, better recognized,” he says, giving graduates a new way to talk to potential employers. “Maybe all that is missing is a better way of expressing things.”

As universities feel their way on micro-credentials, Presant predicts that “the easier route” for many will be through their continuing education departments.

In 2014, Ryerson University’s G. Raymond Chang School of Continuing Education introduced badges and alternative credentials, including in building websites accessible to the impaired. The school also works with a non-profit organization that promotes diversity on corporate and non-profit boards, providing badge recognition aim at training those from under-represented communities who want to serve as directors.

“Most of our students, like most adults, who want to go back for training already have degrees,” says Chang School dean Marie Bountrogianni. “But things change technologically, and otherwise, and people need to upskill.”

Some digital badges recognize skills acquired in short-duration courses lasting days or weeks, with graduates able to post the information on LinkedIn and other digital career sites.

“You won’t put your resume on Facebook, but you can post your badge,” says Bountrogianni. “How you sell yourself to an employer is conducive to badges and other kinds of credentials.”

The disruptive forces roiling the economy only accelerate the imperative for life-long learning, says Robert Luke, vice-president of research and innovation at OCAD University. He says Marshall McLuhan’s long-ago prediction that “people will not so much earn a living as learn a living” has become reality.

OCAD currently offers more than 25 micro-credentials—including design thinking, ethnography and strategic foresight—that can be stacked on one another and, if desired, count towards a graduate-level degree program.
“For us, it is about integrating this [credentialed knowledge] into what you are doing in your work place, with the larger the complexity of the competency, the larger the badge,” says Luke.

Back at McMaster, with graduation still two years away, Asif reflects on the impact of her experiences, in and outside the classroom, in shaping her civil engineer ambitions. “I am very proud to know I have the confidence to say ‘yes, this is what I want to do,’” she says. “From what I have gained at school now I want to give back to my community.”