One university's novel solution to its first-year drop-out problem

At UNBSJ, David Creelman is helping first-years find a path to success—even if that means quitting university 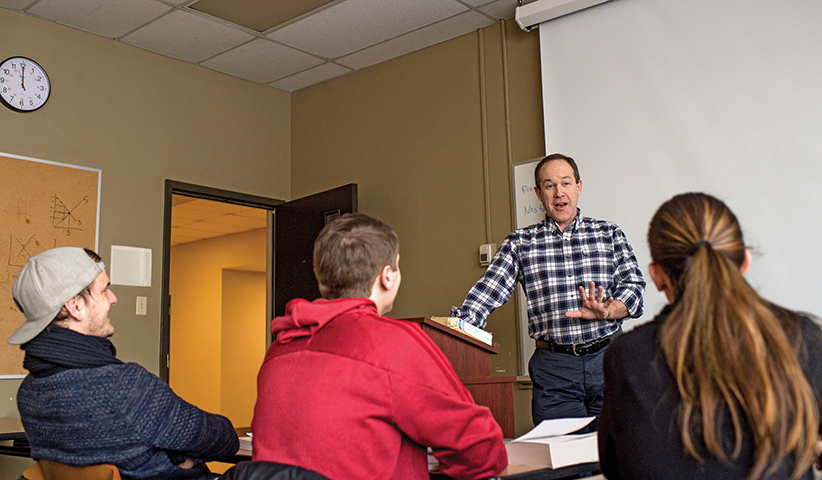 If there is one universal truth about the first-year university experience, it is that this is the time students are most likely to drop out. Depending on which study you consult, quit rates after first year at Canadian universities range from three per cent to as high as 20 per cent, and the reasons students give for quitting are as varied: money troubles, discovering the program isn’t for them, struggles with deadlines and course work. A 2012 study by Western University economics professor Todd Stinebrickner found that almost half of first-years who left a Kentucky university blamed “sticker shock,” or severe disappointment over their dramatically low first-term grades. While many high schools do their best to prepare students for the rigours of academic life, at university, for the most part, it is sink or swim.

The exception to this rule is the University of New Brunswick in Saint John (UNBSJ), where English professor David Creelman and his colleagues designed UNIV 1003, or Everything I Need to Know in First Year, a one-term course. Its objective is simple: Give students the resources and support they need to make it through first year.

“Four years ago, we knew we were losing a lot of [first-year] students who weren’t going into the job market and who weren’t going into other educational opportunities,” says Creelman. “This troubled us, because we thought, if it’s a matter of making sure they stay engaged, then maybe there’s more we can be doing.” Creelman’s course (which he no longer teaches himself) offers guidance, exam prep and library education, not only to first-years, but also to any student at UNBSJ—a small campus of about 2,500 students where this kind of program is much easier to execute. An academic adviser will reach out to any student who gets a D or less in more than one subject.

“What we discovered after the first couple of years is that the students who are faltering in two or three courses, but get contacted by the advisers, end up with GPAs higher than the people who aren’t even faltering and we don’t touch base with.”

Creelman’s goal isn’t retention, but persistence. One of his biggest success stories was helping a first-year, who had decided to leave university, to pursue a career in the trades. “We helped a student discover what he wanted early enough to switch gears,” he says, “and he got some of his tuition back.” He refuses to use the words “drop out”; instead, he uses the term “stop out,” to diminish the shame involved and to indicate that while a student has left school, he hasn’t forfeited his future success.

Creelman’s program isn’t just academic. It has a strong social component, too, one that Jenna Albert, an honours English student who took the course in 2011, says helped her tremendously. “It wasn’t just study tips or how to prepare for exams,” she says. “We had to do a fundraiser. We picked a charity. We had to meet people [on campus] and meet administration.”

In other words, it was curricular and extra-curricular all at once. “A degree is more than something you purchase in order to go on to something else,” says Creelman. “It’s a life-changing experience.”