Despite a conventional PSE platform, the Wildrose Alliance might still have a radical edge 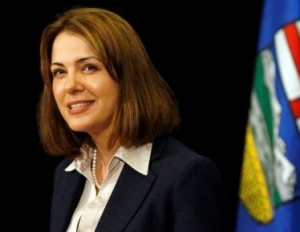 When talking about higher education, Alberta’s Wildrose Alliance leader Danielle Smith rarely sounds like the “libertarian” she is commonly believed to be, and certainly sounds nothing like the “extreme” right winger the current government tries to paint her as.

In her view, high student debt “is untenable” because “it discourages kids from seeking higher education.” She slams the University of Alberta and the University of Calgary who have, in the past, circumvented a tuition cap by raising non-tuition ancillary fees because “We don’t think that is fair to students.”

However, there is one policy plank that, depending on how it is implemented, could be one of the most radical departures in Canadian post-secondary education policy in decades. When unveiling the platform at the University of Calgary in October, she advocated for “sending a good chunk of government funding directly to students and allowing it [to] follow them wherever they choose to go.”

The plan, she told the audience, “would have the effect of adequately funding the schools and the programs that are in the highest demand while at the same time creating competition between schools to offer those programs at reasonable rates.”

While the idea remains underdeveloped, Smith’s choice of words have signaled to some observers that she favours a voucher system, albeit a relatively modest one. A pure voucher program would involve entirely replacing operating grants to universities and colleges with direct transfers to students who would then take their money, in voucher form, to any school of their choice. Smith has not proposed anything so bold. A “good chunk” is not the whole envelope.

Nonetheless, her comments prompted the Council of Alberta University Students to request clarification from the party on this peg of their platform. Aden Murphy, a student executive at the U of A, says that the worry over transferring education funding in voucher style is that it could cripple universities, unless it is modified enough to take into account multi-year enrolment projections.

“An institution isn’t as agile as a small business,” he says.

When asked about her university funding plans Smith is reluctant to actually use the word “voucher,” instead stating that the proposal “is more like our charter school system.” When a “student chooses to go to that charter school, the funding, on a per capita basis, flows directly to that school,” she pointed out in an interview. “There is some value in considering this approach in post-secondary education as well.”

If her comments were simply intended to refer to per capita student funding, already incorporated to a degree in Alberta, then her plan may be similar to other elements of the Wildrose higher education platform, that is, it may involve modest tweaks rather than slashing and burning.

Of course, Smith could be hedging on this question to avoid appearing immoderate. In the past she has openly advocated for a voucher program in the K-12 system. A report she coauthored for the Fraser Institute concluded that, “Schools must be given the freedom to innovate and the requirement to do so. The way to do this is to introduce competition into the school system through a voucher scheme.”

An article that appeared in the Georgia Straight last spring wondered if Smith has been preparing to put her old education ideas into practice. For primary and secondary education, the Wildrose Alliance is only officially committed to supporting “School Choice” legislation.

In addition to enforcing rules that index tuition to the rate of inflation, the more fleshed out, and conventional, parts of Smith’s higher education platform includes plans to forgive student debt for graduates who stay in Alberta, remove parental income as a factor in loan eligibility, and to streamline the credit transfer process.

She would also change election rules so students living in residence could vote in their university riding, rather than in their parents’.

“We seem to have no problem setting up polling stations in other facilities where we have temporary residents, like prisons for instance, like nursing homes for instance,” she says. The current Progressive Conservative government, Smith adds, has “no reason to find a way to facilitate the vote [for students],” because they tend to be more “left-leaning.”

So far her platform is receiving cautiously optimistic reviews from student leaders. Murphy says that a year ago students he spoke to were worried that Smith would promote privatizing elements of the university and college sector.

“That fear hasn’t come to pass,” he says.

He does note that any debt relief scheme shouldn’t supplant current programs, and that upfront grants would be preferable to tuition tax credits. But on balance he is hopeful that if Smith were to become premier after the next election, her focus, at least when it comes to higher education, would involve tweaking the current system rather than anything particularly revolutionary.

“They showed they are serious about developing a constructive higher education policy,” he says.

Where Smith is more comfortably conservative is on her already notable distrust of the federal government. She dismisses any legislation to enshrine higher education standards across the country—as has been proposed by the federal wings of both the NDP and the Liberal party—as unconstitutional.

“There is just no way that we would support an increased federal role so that they can start meddling in this area. I don’t see how that would benefit Alberta taxpayers or Alberta students,” she says. “I would anticipate that that would just be another mechanism to transfer wealth out of Alberta.”