The shocking childhood of Ashley Richard and how she overcame it

Inspired by her grandmother, Ashley Richard went from being homeless, poor, abused and assaulted, to an award-winning student. 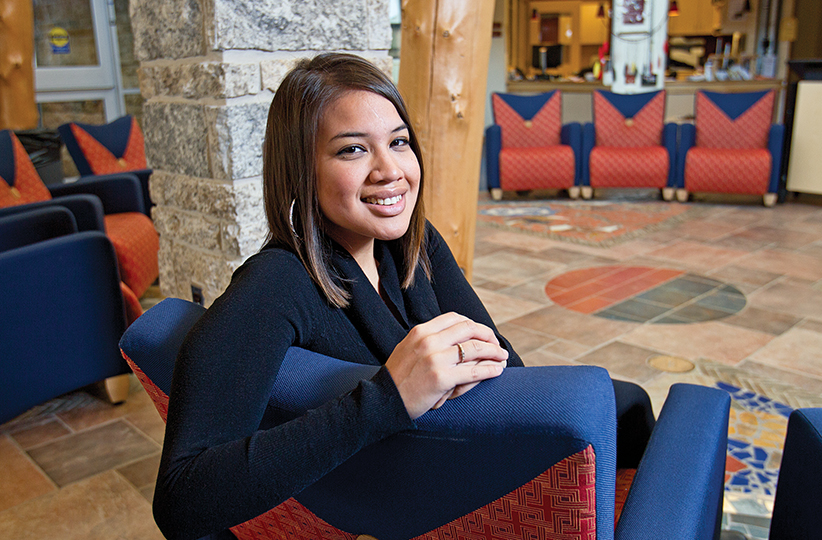 The most amazing thing about Ashley Richard, among her many incredible accomplishments, might be the fact that she has lived to see 20. The University of Manitoba student had far from the typical upbringing of most of her cohorts at the Asper School of Business.

“I feel like I really need to show people that I am stronger because of all of these experiences, that I am not broken,” says the award-winning student. “These stories—while they may seem shocking—have made me the person I am today.”

The move to Winnipeg four years ago was a homecoming for Ashley, whose grandmother, Mary Richard, was a well-known leader in the Aboriginal community, particularly in Winnipeg’s North End, where she was known as “the mayor of Main Street.” Mary, a former CEO of the spiritual centre called Thunderbird House, and executive director of the city’s Indian and Metis Friendship Centre, often cared for Ashley. Her son Robert, Ashley’s dad, battled alcoholism. “He wasn’t safe to be around,” says Ashley, 24, who is completing her third year as an exchange student at the Kedge Business School in Bordeaux, France. He died of a heart attack when she was 14.

After Ashley and her mom moved to Mississauga, just west of Toronto, she was pulling in good grades at high school. At 15, she left home after a conflict with her mother, though her grandmother swooped in to help the teen find and pay for an apartment so she could continue her studies. But Mary was ill; she had to go back to Winnipeg for dialysis.

In her loneliness, Ashley made the wrong friends; a month later, she was evicted. She moved in with her 40-year-old boyfriend, who had no family, a serious drug addiction and was physically and verbally abusive. “I thought I was in love,” she explains. One night, after an argument, he said he would snap her neck and make it look like an accident, and she didn’t doubt him. Ashley threw some clothes and a few pictures of Mary into a garbage bag and fled. Out on the street, she came to a sobering realization. “I had nowhere to go.”

She couch-surfed for a while, “but it’s amazing how quickly you run out of friends that way.” Then she was expelled from high school for her many absences; she’d taken extra shifts at Blockbuster and Subway to try to pay for a new apartment. She was too proud to ask her grandmother for help, ashamed to let her know how badly she’d screwed up.

Archbishop Romero, an alternative Catholic high school in Mississauga, took her in. She was bright, articulate, a good reader and stood out in the school, according to teacher Margie Gillies. “She had a clear hunger to learn and get out of high school, which the other kids did not. She was beaten down. She was feisty and defensive and refused to show any vulnerability, but she kept coming to school, even when she hadn’t had anything to eat.” Ashley lived at a shelter for a year, where kids overdosed, fights broke out and residents suffered from mental-health problems. “I knew this wasn’t me,” Ashley says. “I knew I needed to get out of there. I just couldn’t figure out how.”

Gillies’s biggest fear was that Ashley would become one of Canada’s nearly 2,000 missing and murdered Aboriginal women. “You can’t be a number,” she’d tell her. “You’re so much more.”

Yet, one night, as she stood waiting at a taxi stand at a deserted GO Train station in Mississauga, she decided to walk home and was halfway there when a car pulled up beside her. “Where you headed?” the driver asked. He said he was going the same direction. Instead, he took her to a desolate stretch of the city near Lake Ontario, where he beat and raped her. Initially, she tried to fend him off, scratching, kicking and punching. “But he was so strong,” she says. “I gave up. I couldn’t fight back anymore.” She was sure he was going to kill her, but he let her go. It took hours to get home. Every step hurt.

Chadia Lewis, a friend from the shelter, held her until she stopped sobbing. It was the first time Lewis had seen her tough-as-nails friend cry. Ashley didn’t have anyone else, so she called Gillies, who drove her to the hospital and then the police station. Her attacker was never caught.

In the wake of the assault, Ashley fell apart. She refused tell her grandmother, because Mary was so ill. She did whatever she could to ensure she was never alone. She took a third job. She stayed up all night because sleep terrified her. She felt utterly alone, and no longer cared whether she lived or died.

When she flew to Winnipeg to be with Mary, who was recovering from a kidney transplant, she was convinced Ashley had been in a car crash. “Grandma, I’m fine,” Ashley kept assuring her. “There was no accident.” Mary died soon after from complications from the surgery.

Back in Mississauga a few weeks after the funeral, Ashley got into a car with a drunk driver behind the wheel. When it slammed into a tree, the front end crumpled and her face smashed into the windshield. She awoke hours later, severely concussed, inside a CT scanner.

Ashley couldn’t stop thinking of her deeply spiritual grandmother, and her obsession with a car crash. Had Mary somehow foreseen the accident in a vision? Why had she been spared? “I’m on a path to nowhere,” she thought. She had no family in Toronto, and few real friends. “I can’t keep living like this,” she decided.

As soon as she recovered, she left for Winnipeg, moving in with an aunt. She enrolled at the University of Manitoba and, in 2013, won the $15,000-a-year Pauline and Roger Presland scholarship, which helps indigenous students pursue post-secondary degrees. In 2014, she was awarded a Manitoba Aboriginal Youth Achievement Award.

After earning her M.B.A., she hopes to work for an indigenous economic authority, helping to forge business partnerships with the wider community. She’s embraced her Metis heritage, once a source of shame. The smudges and sweats she previously dismissed as goofy have become a comfort. This fall, she’ll start giving lectures at North End schools, telling students about being homeless, poor, abused and assaulted. For the first time in her life, Ashley feels like she’s found her true home.

“The old Ashley could be impulsive,” says her friend Chadia Lewis. “The new Ashley thinks things through. She apologizes when she messes up. She’s reflective.” Ashley recently wrote Gillies, her Mississauga teacher, to thank her for all she had done. “You believed in me when I didn’t believe in myself,” she wrote. “You saw something in me when I didn’t see anything.” A few months ago, an indigenous leader who knew her grandmother told Ashley how much of Mary he saw in her. She smiled for days. How proud her grandmother would have been if she could have seen her now.