The apple and your eye 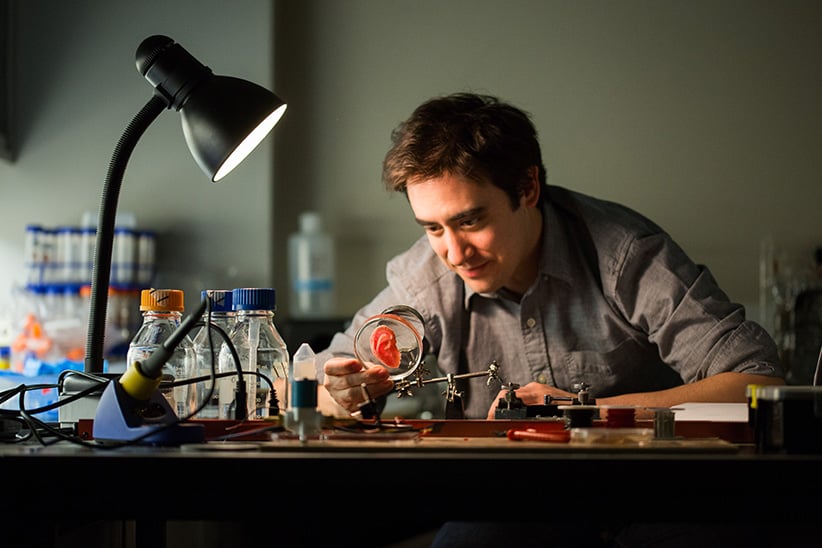 Andrew Pelling waves a slice of apple at his audience, pointing out its unusually pink pulp. The colour, he tells them, comes from human skin cells growing inside the apple.

As the University of Ottawa biophysicist explains in a TED Talk, he is studying how to turn fruits and vegetables into a new and cheap source of biomaterials to repair the human body.

“Nobody else is doing this. In fact, in the early days people thought I’d lost my mind,” says Pelling, speaking later from his office.

The process is surprisingly straightforward. He and his team bathe an apple in boiled water and liquid dish soap, which causes its cells to pop open and release all cellular material. The researchers wash this material away, leaving behind the apple’s rigid cellulose scaffolding. This scaffolding can then be populated with mammalian cells (cells from mammals, like us) that grow in the spaces that once contained apple cells.

In this way, it might one day be possible to grow an ear or an organ for transplant. Doctors could also inject scaffolding into the body, under the skin, say, allowing the body’s own skin cells to populate it for skin grafts. However, neither approach is ready for use in humans. Pelling and his team are still experimenting.

For fun, Pelling had apples carved into the shape of human ears before infusing them with skin cells, creating a series of remarkably life-like severed ears. In a more serious vein, he also injected cellulose scaffolding just under the skin of lab mice to see if it would take. Not only did it not trigger a negative immune response, but “a few months later, the animal’s body has populated [the scaffolding] with its own cells. It has become part of the tissue,” he says.

He and his team are now studying whether apple-, asparagus-  or even rose-petal-based cellulose scaffolding might be used in skin, bone or nerve repair.

While his work is still very much in the early research stage, it has caught the interest of doctors at two Ottawa-area hospitals who are brainstorming with Pelling over potential applications. That’s because the scaffolds currently used in regenerative medicine to graft skin and bone are expensive and usually made of collagen harvested from human cadavers.

“A toonie-sized piece of traditional scaffolding material costs US$1,000. We’ve developed a material that could be just as good for a fraction of a penny,” says Pelling. “Plus, would you want a piece of cadaver in you or a piece of apple?”

Craig Simmons, a professor of mechanobiology at the University of Toronto who studies tissue engineering, says the design principles and structures that Mother Nature uses to build fruits are similar to those used to build tissues in the body. But he cautions that it’s still unclear what will happen to cellulose-based scaffolds once implanted in the human body.

“Their clear advantage, however, is that they make it possible for anyone to grow tissues, and that opens up all sorts of cool and intriguing DIY applications, including body art and lab-grown meat,” says Simmons.