Faster and cheaper than anything on the market today 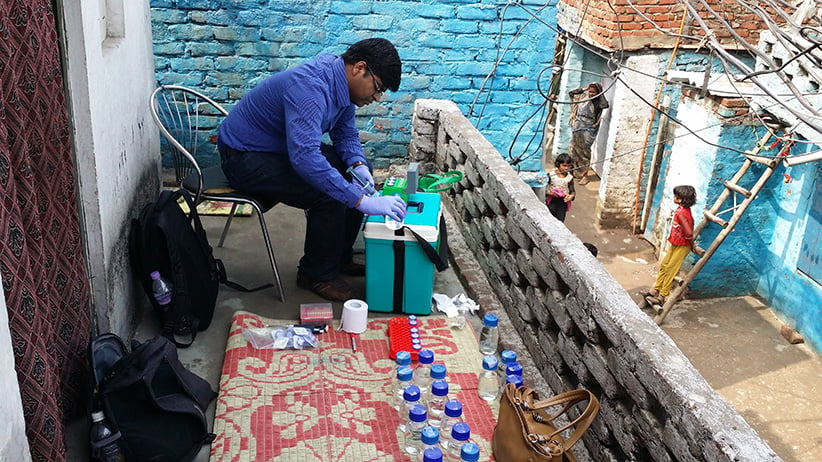 Naga Siva Gunda, associate researcher at the Micro & Nano-scale Transport Laboratory in York University’s Lassonde School of Engineering, is testing water for E. coli contamination at one of the field locations in Delhi, India. (York University)

If for any reason you want to test water quality, the process isn’t easy. “You have to collect the sample and send it to the lab where they’ll grow, culture and count the bacteria,” says mechanical engineering professor Sushanta Mitra from York University’s Lassonde School of Engineering in Toronto. “The process takes anywhere from 24 to 48 hours, during which time lots of people have already long drank the water.”

A better solution was prompted by a call from India’s public health department. “Doctors there just weren’t able to address all the problems with water-borne diseases, specifically E. coli,” explains the mechanical engineer. But this is by no means a problem confined to developing countries. Public Health Ontario receives a huge amount of water samples from owners of private wells, and situations like Walkerton—where half the Ontario town fell ill and seven people died in 2000—are too close for comfort.

“From day one, we realized this can’t be a purely esoteric scientific endeavour,” says Mitra. High-tech sensors would work, but they would be too expensive for the people who needed them most. “We had to rework and redesign an affordable portable solution to rapidly detect E. coli right at the source,” he says. “We realized an easy solution is the best solution.”

The mobile water kit looks a little like a needle from a child’s doctor kit: It’s a clear, easy-to-work plastic syringe. “You collect your water sample and push it through the tube like a plunger,” he says. Inside is a custom hydrogel reactant. “The chemical compounds react and, if there’s E. coli, the water turns bright red.” The results are plainly visible to the naked eye and appear from two minutes to an hour later—faster than any other rapid-test methods available on the market.

Depending on volume, the cost per unit currently ranges from $3 to $10—with mass production, the units could drop to just a few cents each. “It’s a low-cost, high-volume model based on frugal innovation and technology for the masses,” explains York University research associate Naga Siva Kumar Gunda. Despite its low price tag, the mobile water kit could prove invaluable to individuals—both locals and travellers, who could easily pop the handy device into their suitcases—as well as communities and municipalities all around the globe.