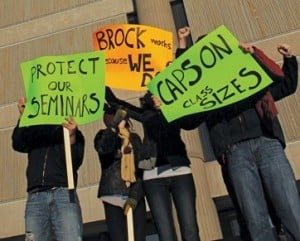 Tension is mounting at Brock University as the union representing Brock’s teaching assistants and part-time instructors has rejected entering into binding arbitration for the labour dispute that has been ongoing since the union’s contract expired in June.

In a March 3 press release, the university accepted the student union’s recommendation to submit all outstanding negotiation items to binding arbitration, but the union bargaining team has no intention of doing the same.

CUPE 4207, which represents more than 840 TAs, part-time instructors, marker-graders, lab demonstrators and full-time English as a Second Language co-ordinators, has set a strike deadline for March 14 at 12:01 a.m.

Even though two mediation sessions are scheduled to occur in the next 10 days, things appear to have hit a standstill between the two sides, with both groups going to the media to defend themselves. It’s no wonder students are concerned for their semester at this point.

“Our goal is to achieve a fair deal that enhances the quality of education at Brock,” Dan Crow, president of CUPE 4207, said in a media release yesterday. “For close to a year now, we’ve heard nothing from management that comes close to meaningful bargaining or fruitful discussions that build Brock’s reputation. Instead, the administration continues to focus on cuts and concessions — that is why we are facing a lockout or strike deadline.”

Meanwhile, in the same breath they used to accept the student union’s recommendation of binding arbitration, the university disputed every point of contention between the two sides, effectively digging in their heels.

“The union has talked about a lack of progress in collective bargaining. The union has sought more than 100 changes to the collective agreement, including proposals that would significantly raise the cost of salary and benefits,” the March 3 statement reads.

The labour union has claimed the university is allowing too many students to enroll in seminar classes, that TAs are being told to assign marks based on an essay’s first and last page only, that TAs aren’t being paid properly, and that management has come to the bargaining table unprepared on numerous occasions.

With such accusations flying around, I’m not surprised students are worried about a strike possibly disrupting their semester. And with the realities of the 2008-09 work stoppage at York University still fresh in their minds, students are likely preparing for the worst. The strike at York lasted a record 88 days and was only halted when the province ordered striking faculty back to work.

It seems the student union is the only group that actually has students’ interests at heart — and so they should. On top of encouraging both sides to work through their issues and declaring a strike “should not and cannot be an option,” they have set up several channels with which to disseminate information quickly and effectively to students.

As evidenced by York two years ago, a strike is not in anyone’s best interests, especially students’. Lets hope both the university and the labour union use the next 10 days effectively so students can get through the rest of their semester unscathed.