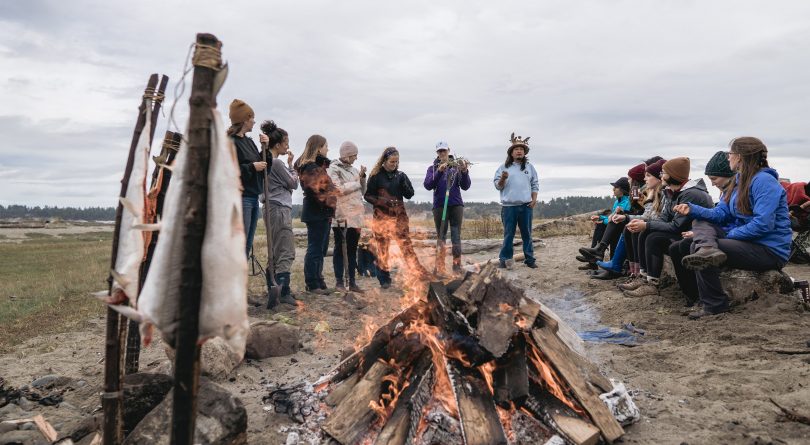 There are many nêhiyaw—or Cree—ways to hunt moose. There are very old required legal teachings, each passed down through families and communities, learned through the patient experience of preparing to take a life. Just as these ways are dependent on the repetition of footsteps on prairies and through muskeg and bush, they also rest on the recollection of songs and stories, and on the guidance of ceremonies. According to some older Cree legal practices, the hunt starts long before the bush. It is initiated through offerings and dreams as those who intend to hunt begin to come to terms with harming a relative. All of this is entering into a relationship of reciprocity. All of this is continuing a relationship with Cree law. It is a practice of wahkotowin, or the principles that govern our relationships with each other, including those with our animal relations. Proper adherence to these laws teaches how to respect the moose’s life and how to continue on with our lives in a proper way.

Once a moose has given its life, there are many Cree ways to prepare moose. The initial frenzy of dressing a moose (skinning it, removing its organs and guts, quartering and removing the meat) dissipates and gives way to the slow, hard work of making the most of the life you just took. You have become obligated. Making use of the meat and the organs is the easier and exciting work. The bones are harder. They can be either cracked open for marrow, ﬁlled with grease from the fatty parts of the moose or saved for soup. In the very old ways, they were converted into tools for scraping. The moose hide—seemingly growing heavier by the hour with your responsibilities—must be stretched out until it is almost as taut as a drum. The tighter it is, the easier the scraping becomes. Scraping moose hide. Tough work. The older ones have developed a hidden strength for this hardest work, a strength they have been gifted through hours of clutching and grooving scrapers on rough rawhide, convincing tufts of hair that it is okay to fall away. Eventually it relents and gives way to its new life, maybe as a drum or a pair of moccasins.

READ MORE: Why Indigenous visibility is part of the Maclean’s university rankings

I share the above to recognize the essentiality and challenge of teaching law through relationships with the land. Indigenous law, like many other Indigenous knowledge systems, requires students to leave the limited environment of traditional university lecture halls and go out onto the land. For those unfamiliar with Cree legal processes, they sometimes do not work in the strict linear fashion of other traditions, from the breach of rule to immediate individual consequence. The wahkotowin described above provides guidance to avoid collective consequences for cumulative breaches. Practising Cree law requires us to move beyond our intellectual aspects, as we must physically endure, spiritually connect and emotionally embrace our obligations to the moose’s life. This is what Cree people describe as “four-bodied learning,” engaging with our physical, intellectual, spiritual and emotional selves. The practice ensures we are employing not just our intellectual selves, but relating to the ecological world around us with our full humanity.

Law schools are beginning to act on the understanding of the wealth of legal knowledge outside the classroom. In doing so, they are increasingly turning to partnerships with Indigenous communities to lead on-the-land teachings. For example, the Osgoode Hall law program has begun annually to take part in an Anishinaabe Law Camp. Hosted by the Chippewas of Nawash First Nation on the Bruce Peninsula in Ontario, students are immersed in the ecology of Anishinaabe law. The University of Alberta has worked with Aseniwuche Winewak Nation to bring law students onto its territory and, through the careful guidance of community elders and youth, learn about wahkotowin. This year, law students at the University of Victoria have the opportunity to engage in a ﬁeld course in WSÁNEĆ—or Saanich—law, during which they will spend a full semester focusing on WSÁNEĆ legal practices and how they are regenerated and continued through guided teachings on the lands and waters of Vancouver Island.

RELATED: How Canadian universities help fight to save Indigenous languages

These are only a few examples from select law schools in Canada. Other law schools and other university faculties are digging their hands into the soil and standing themselves in rivers to provide four-bodied learning opportunities. While the Truth and Reconciliation Commission Calls to Action have brought focus on the indigenization of university curriculums, the seeds of land-based Indigenous learning have long been sown. And while universities are adept at formally acknowledging the traditional territories and unceded lands they’re situated on, engaging in land-based learning at the direction of Indigenous nations begins to give such recognition meaning.

Returning to the brief description of obligations during hunting, it is also important to remember that as a legal principle, wahkotowin represents just one star in a myriad of constellations within Cree law. Widening the frame, it is also important to acknowledge that Cree law is only one of the multitude of Indigenous legal orders in North America. As university students are led out on the land, law schools are committing themselves to showing the full vibrancy of law in North America. If you allow yourself to conceive of laws and legal systems as stars and constellations as I have, then it is wondrous what other beautiful patterns will come into our view—if we choose to make all the stars in our sky matter. Engaging with Indigenous laws on the land is one step in making it so.

Darcy Lindberg is an âpihtawkosisân nêhiyaw/mixed-rooted Plains Cree person, a recovering practising lawyer and doctoral student at the University of Victoria.