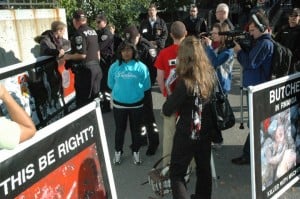 The Carleton University Student Association (CUSA) has made a farce of its own supposed values by threatening to strip an anti-abortion club of student group status.

CUSA issued a notice to Carleton Lifeline Monday saying that the group will been banned for failing to comply with CUSA’s anti-discrimination policy. It helpfully informed the club that it has the opportunity to be recertified, so long as it adjusts the terms its constitution.

“We invite you to amend your constitution to create one that respects our anti-discrimination policy,” wrote Khaldoon Bushnaq, CUSA’s vice-president of internal affairs. CUSA’s anti-discrimination policy essentially states that “any campaign, distribution, solicitation, lobbying, effort, display, event etc. that seeks to limit or remove a woman’s right to choose her options in the case of pregnancy will not be supported.”

In sum, Carleton’s anti-abortion club must now support abortion rights if it wants to remain a student group on campus. The thought police at CUSA have given Carleton Lifeline until tomorrow to amend its constitution.

CUSA is the same student organization that famously and erroneously characterized cystic fibrosis as a disease only affecting “white people, and primarily men” back in 2008. The student savants who made up the council at that time deemed the disease not “inclusive” enough and voted to discontinue its Shinerama fundraising campaign. The burden of national embarrassment (and, you know, the actual facts about the disease) eventually prompted council to reverse the decision, but it seems the discomfiture of being a Canada-wide laughingstock back in 2008 has settled for the CUSA of late, and it’s getting back to making outrageous moves.

In what can only be perceived as an ironic push for progressivism, CUSA has turned its own constitution on its head; a constitution which explicitly states its aim to uphold an “environment free from prejudice, exploitation, abuse or violence on the basis of, but not limited to, sex, race, language, religion, age, national or social status, political affiliation or belief, sexual orientation or marital status.” Despite Article I of CUSA’s constitution, which states that the organization “shall act as a representative of the entire undergraduate student body attending Carleton University” (emphasis mine), CUSA’s decertification of Carleton Lifeline is little more than a discriminatory move toward a segment of its populace.

Some students at Carleton University believe that abortion is wrong. Shall I pause for dramatic effect? Though perhaps an unpopular position among members of CUSA’s council, it shall nevertheless seek to uphold an environment where pro-lifers can express their political and ideological beliefs free from discrimination. That’s according to CUSA’s own stated principles. Perhaps council has forgotten, but clauses protecting individuals’ rights to association and free speech are precisely so important as to protect those unpopular opinions. Concepts such as a woman’s right to cast a vote or the freedom for gay partners to express affection in the streets were once unpopular and/or offensive positions too, after all.

Not only is CUSA failing to protect its student from discrimination based on political and possibly religious belief (anti-abortion positions are often faith-based, after all), the group has taken on the role of oppressor itself. By mandating a “think like us or else” ultimatum, council is not seeking equity for all students, but rather, is playing favourites with group ideology. Short of CUSA declaring that pro-life attitudes plague only “white people, and primarily men,” I should think this latest hypocriticial CUSA move has just about pushed limits of reason.

–Photo shows Lifeline members being arrested during a demonstration on campus last month.