An insider’s guide to the best campus food, bar for hanging out and more 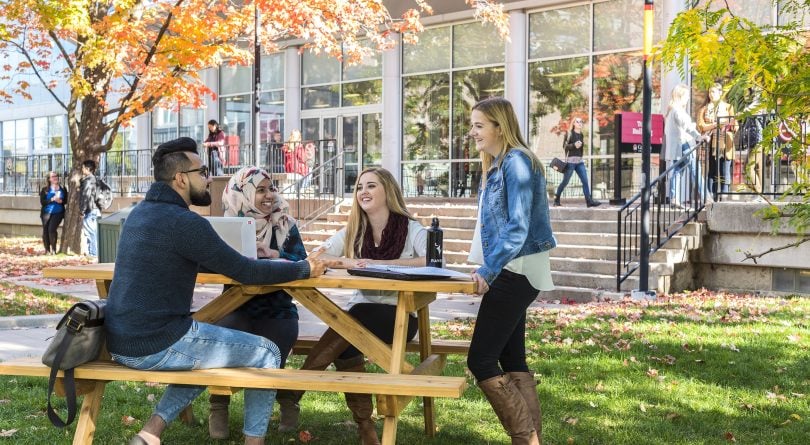 Best cheap lunch:
The Pizza Pizza in the University Centre food court has the cheapest deals
Best hangover breakfast:
We’ve got four Tim Hortons locations on campus, so no matter where you ended up last night, there’s a hangover breakfast nearby
Favourite campus food:
The chicken pitas at Rooster’s is an all-time classic and a Carleton favourite
Best bar for hanging out:
With two bars on campus to pick from, you always have a choice. But if you wanna get off campus, the Local Lansdowne is where it’s at!
Best place to study on campus:
The Reader’s Digest Resource Centre in Richcraft Hall is a hidden gem
Best pizza:
Always keep Domino’s on speed-dial for delivery, but if you’re on campus late and want good pizza fast, check out the late-night eatery in the tunnels called the Oasis
Best place for a nap:
It doesn’t get comfier than the couches on the fourth floor of the library
Best campus event:
Do. Not. Miss. Out. On. The. Panda. Game. It’s hands-down the best experience you’ll have all year.
Best place to live:
The Glebe is pretty much the go-to place if you’re trying to find the best bang for your buck
If I could change one thing about the school:
Change the name of Richcraft Hall back to River Building (RIP)

My first steps on Carleton University’s campus weren’t during the hustle and bustle of move-in day in September—they were at an orientation held in July for prospective students. But from the moment I arrived, I knew I could call Carleton home.

Coming from the West Coast, I didn’t know what to expect. As I raced against time on that stormy summer day, struggling to make it to orientation after already missing other activities, I was greeted by smiling peer leaders who welcomed me despite my tardiness. I spent the rest of the night exploring Carleton’s majestic tunnel system, watching movies, eating pizza and playing video games with my new-found friends on campus. I could already tell Carleton was where I wanted to be for the school year.

And that year didn’t disappoint. After quickly unpacking when I arrived at residence, I was on a bus to Parliament Hill with people I’d just met on my floor. We explored the city and walked back to campus, sipping coffee, forming friendships and finding hidden study spots around the beautiful Canadian capital.

When exam season hit, during the dreaded long Ottawa winter, I found myself taking that same bus to skate on the world’s largest natural ice rink and eating Nutella-flavoured BeaverTails.

It was the top-notch journalism program that attracted me to Carleton at first, but the people I met along the way are what made me want to call it home.

After Class
Being located in the nation’s capital means Carleton is a truly political school. Whether you’re studying journalism or another program, this makes for some amazing year-round opportunities for activism and engagement within the student community. If student politics isn’t your thing, you can watch federal politics happen in real time during rallies, protests and demonstrations on Parliament Hill.

Local Vibe
If there’s one thing I can truly say about Ottawa, it’s this: it grows on you quicker than you think. Whether it’s the city’s uniquely Canadian experiences, the local food movement or the independent music and poetry scene, Ottawa has a way of making you fall for it head over heels.

I can’t tell you the number of times I found myself admiring the beauty of this city. You can spend weekends exploring museums or art galleries or discovering a new book in the most beautiful local café in the world—Black Squirrel Books. Give this quaint little city a chance and let it work its magic on you.

More Info
For all the latest updates on campus life and what’s happening in the city, visit the website of Carleton’s student newspaper at charlatan.ca. You can volunteer to write for the paper and get press passes to exclusive events.