"They started banging on the walls, yelling ‘shame’ and screaming" 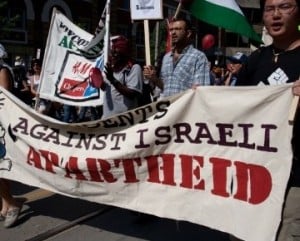 Protesters outside the council room began chanting and yelling after the decision, and some students say they felt trapped and threatened.

CUSA was to consider a motion to call on the university to adopt a “Socially Responsible Investment” policy for Carleton’s pension fund, which specified divestment from Israeli companies. Prior to voting on that motion, CUSA VP Finance Meera Chander proposed an amendment recommending divestment from all illegally occupying states, not just Israel. That motion passed, and the chair ruled that voting on SAIA’s motion would be redundant, so it was struck from the agenda.

Some details of the evening were circulated in press releases issued this morning. Twitter feeds also documented the situation as it was unfolding, however CUSA executives have not yet responded to requests for comment.

Due to space constraints, many of the students and faculty who came to support the motion had to wait outside the council room. The Charlatan estimated there were 200 protesters outside the doors.

“It got pretty intense,” Scheffel says. “They started banging on the walls, yelling ‘shame’ and screaming.”

Some students also allege they were subject to physical intimidation and homophobic slurs for opposing the SAIA motion.

“My personal safety was threatened repeatedly last night, and I am extremely apprehensive about coming onto campus now,” Hashem Hamdy, a CUSA councillor in the Faculty of Public Affairs, said in a release. “I feel like a marked man, like many other students on campus.”

Students were escorted out of the room when additional security arrived. Reem Buhaisi, media outreach for SAIA, says their goal was to encourage CUSA to do the right thing.

“I personally thought the atmosphere was inspiring,” she says. “There were hundreds of people in support of both motions there, and they were saying slogans about anti-war and responsible investment.”

“It was strongly organized,” she says. There were chants and people were loud, but that’s to be expected. They were there to promote anti-war justice and it got loud, of course. I wouldn’t say there was a riot.”

Buhaisi says some people brought musical instruments and drums and there was some banging on the walls. “It was about reclaiming the CUSA space, and students were asking for support.”

SAIA hopes to take its motion to the Board of Governors.

Photo: Protesters carrying “Students Against Israeli Apartheid” banner during the G20 in Toronto, by StephLaw