Dean Mortensen disappeared, leaving only a blue ball cap behind

Dean Mortensen grew up in Grande Cache, a coal-mining town four hours west of Edmonton. He played hockey every winter (defence) and graduated at the top of his class. In his first year at the University of Alberta, Mortensen lived at St. Joseph’s College, patrolling the blue line for the Rangers, the dorm’s intramural hockey team. A poster of his favourite player—Steve Yzerman, captain of the Detroit Red Wings—hung on his wall.

“He was a super-bright guy, and really responsible,” says Stephen Beland, a lifelong friend whose room was just down the hall. “He was the only guy in the whole dorm who made his bed every day.”

In January 1992, a few weeks into second semester, a group from St. Joe’s ventured to The Ship, a campus pub not far from their residence. Mortensen, 19 at the time, was not much of a drinker, but he did down a couple of vodka slimes as the music blared. Beland specifically remembers watching his buddy bob his head to AC/DC’s latest hit, Thunderstruck. “He was an old-fashioned kind of guy,” Beland recalls. “Nowadays, people are rude and crude. He wasn’t like that. He looked like a character out of a Norman Rockwell painting. He was lanky, shaggy-haired and quiet. I never heard him swear once in my life.”

Beland left the bar before midnight and was under his covers by the time Mortensen headed home with two other pals. They were halfway back to the dorm when the others decided to turn around and return to the pub. Mortensen kept walking.

And was never seen again. 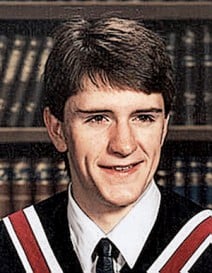 A science major, Mortensen missed his class the next morning. When he didn’t show up for supper that night, a frantic Beland convinced the prefect to unlock his friend’s door. The bed was still made. Nothing was missing or out of place.

Over the next three days, dozens of friends walked every inch of campus, searching for possible clues. Police also canvassed St. Joseph’s, asking some uncomfortable questions. Did Mortensen have enemies? Was he depressed? Suicidal? Two weeks after he disappeared, a librarian stumbled on his blue ball cap: a St. Joe’s Rangers hat inspired by the Winnipeg ?Jets logo. Twenty-one years later, it’s the only real clue.

“He was one of my closest friends, and it still haunts me to this day,” says Beland, now 40. “I’m an avid runner, and every time I run in the River Valley near campus, I wonder if I’ll find him.”

The Edmonton police have not given up, either. Mortensen’s high school graduation photo is featured on the force’s missing persons page, along with a description of what he was wearing that fateful winter night: Nike running shoes, faded blue jeans and a St. Joe’s Rangers hockey jersey. His leather jacket—“Grande Cache Bantam Elks Hockey”—featured his name on one sleeve and “Defence” on the other.

It is possible, Beland says, that his friend did kill himself, despite no obvious warning signs. Or maybe he just wandered into the night and passed out in the cold. But if either of those scenarios is true, why did his body never turn up? If he was not the victim of foul play, how did he literally vanish? “There is no closure, and that has been overwhelming,” Beland says. “Part of me keeps on wondering if I am going to see him one day.”

At St. Joseph’s College, a photo of Beland’s friend still hangs in the study hall. The students who sleep there now weren’t even born when Mortensen went missing, but his story is not forgotten. On Jan. 24, the anniversary of his disappearance, residents still hang hockey jerseys out their windows, hoping this might be the year the mystery is solved. 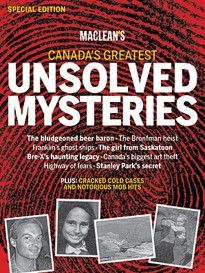 This story appears in the Maclean’s special issue: Canada’s Greatest Unsolved Mysteries. Pick it up on newsstands, beginning Nov. 18.

FILED UNDER: Dean Mortensen Edmonton The Vault University of Alberta