A delicious novelty food with an ugly name 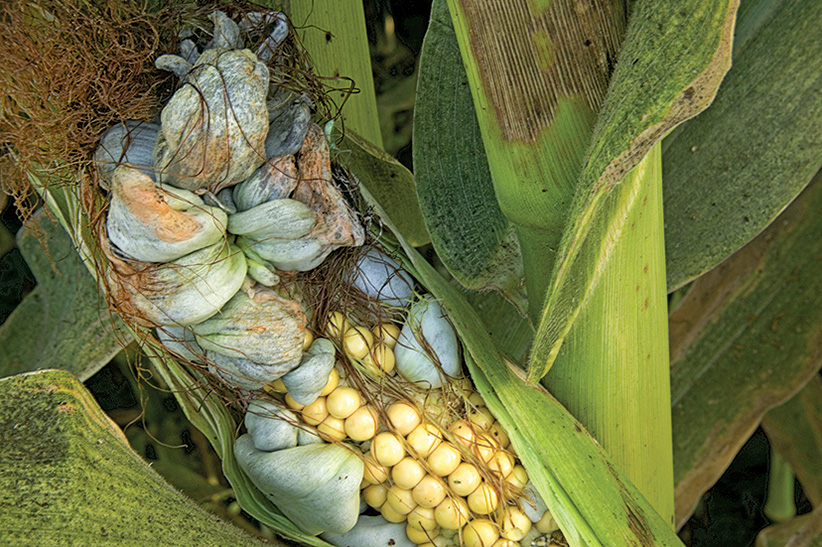 Barry Saville has spent much of his career figuring out how to stop fungi from infecting food crops. But for the past three years, the Trent University professor has been deliberately infecting corn with a fungus that produces large, whitish-grey kernels he believes have potential as a niche product for market farmers.

Here in Canada, we have a decidedly unpretty name for it: corn smut. But in Mexico, where it’s considered a delicacy and eaten in quesadillas and tacos, they use a more melodious word: huitlacoche (weet-la-KOH-chay). Saville calls it corn truffles and recently recommended it to the Ontario Ministry of Agriculture, Food and Rural Affairs as a foodie novelty that farmers could cultivate and sell at farmers’ markets for a premium.

He estimates a corn truffle cob might be worth $5 to $10, compared to the 50 cents or so it costs to buy a cob of sweetcorn.

“When the Mexican restaurant here in Peterborough gets their hands on it, it’s absolutely delectable. They taste like a combination of mushroom and corn,” says Saville, chair of Trent’s forensic science program.

Saville got hooked on huitlacoche while travelling in Mexico in 2003. In North America, though, the Ustilago maydis fungus that produces huitlacoche is considered a pathogen. While it can be found just about anywhere corn is grown, Seville initially wanted to import to his lab a Mexican strain.

However, when he asked colleagues at the Canadian Food Inspection Agency about it, they gave him an incredulous look. “‘You can’t import pathogens,’ they said. ‘That is a very bad idea,’” recalls Saville.

And so he went looking for Ontario-based fungal strains and corn varieties that would produce the best-tasting huitlacoche. He planted the corn in the university’s test plots, waited for their tassels to form and injected the fungi into the tassels’ pollen tubes. He tried a small pilot test with a local corn farmer this year and hopes to do another trial with a farmer with expertise in both corn and mushrooms.

Saville also enlisted the help of chef professors and students at Fleming College to create huitlacoche recipes. The Fleming team outdid itself, he says, creating elaborate meals of tenderloin encrusted with huitlacoche, huitlacoche pickled in honey, and in soups and ravioli—all served at the college’s in-house fine-dining restaurant. When the Fleming team offered free huitlacoche pâté samples at the local market this summer, people stood in long lines for a chance to try it.

Jeffrey Pilcher, a professor of food history at the University of Toronto Scarborough and an expert in Mexican cuisine, says Saville may be onto something: “There is a growing recognition that Mexican food is not just Tex-Mex, and huitlacoche fits nicely with the notion of Mexican food as down-to-earth,” says Pilcher. “I think there is a lot of desire for that.”