A professor responds to a critique of traditional learning 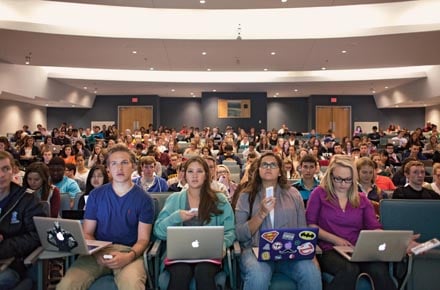 Recently, Quest University President David Helfand published the kind of airy opinion piece that university presidents like to write. It’s another genial screed about how universities (except his presumably) are tired old remnants of 19th century thinking where dusty old professors drone endless lectures to students who subsequently regurgitate the cold useless facts on a pointless test.

It would be mean spirited if it were true. It’s outrageous because it is false.

First, the picture he paints of universities probably never existed and it certainly is not the norm today. University courses are and always have been much more than lectures. Even the most traditional professor assigns readings, projects, essays, and holds office hours for personal, one-on-one consultations with students. Good students have always been active learners and good professors have long seen themselves as doing far more than imparting information. When Helfand claims that today’s professors don’t care about imparting thinking skills, I have to wonder whether he knows any professors. He certainly doesn’t know me.

As I have argued before, what Helfand calls lecturing is only very bad lecturing, but no pedagogical method should be based on how it is done by those who are terrible at it. A good lecture does not see students passively being filled up with mind-numbing trivia. A good lecture engages students, makes them laugh, makes them think, and makes them ask questions. I know because I’m a good lecturer, and I’ve learned a lot from good lecturers.

READ MORE: What’s different at Quest University? Pretty much everything.

But most annoying of all is the now clichéd presentation of problem based learning as though it is a panacea for all the perceived diseases in higher learning.

I say this as one who has used the problem based approach in my classes. In some courses, instead of having students write individual essays, I have them collaborate on a book about a given topic (Helfand says we profs think collaboration is cheating, but he’s wrong there too). One student acts as editor and the students work together to figure out who is going to cover what areas, how the volume is to be organized, and how the material will be presented, according to professional standards. When a draft of the volume is ready, groups evaluate other groups’ work, providing feedback to improve the final version.

When it works, it works great. Students feel motivated to do their best work possible because they know the other students are counting on them. And when the book is finished, they feel a sense of pride and accomplishment that outstrips that of producing  a single paper.

So successful was this project-based, student-centered method, I decided to bring the approach to a course where I hadn’t used it before.

It was a disaster.

One group simply could not get their project together and ended up handing in a single rambling paper that wasn’t remotely what was assigned. Another had an editor who disappeared and couldn’t be reached — so I had to let the remaining members do their own individual essays. One group got their project done but without the other groups pulling up their end, the peer evaluation part fell to pieces.

When it was over, I asked myself what went wrong, and I realized that the approach was sound, just not for that particular course. In my other courses, the students had been mostly English majors and had taken several other English courses before. They knew what a good essay, more or less, was supposed to look like, and knew what they could expect from their fellow group members who were similarly well-prepared. But this course was largely students taking English as an elective. Some of them were first year students and, simply put, they weren’t all up to the challenge.

This is why platitudinous calls for a universal, twenty-first century, problem-based pedagogy are misguided. They assume that all students are equally capable, equally prepared, and equally motivated. They are not. A conscientious professor holds all students to the same high standards, but also understands that not every class at every level can be taught the same way. Indeed, as Mary Burgan points out in a stimulating essay on the subject, good lecturing provides students with a rare opportunity to witness something they rarely get to see in what Helfand calls “life”: “intellectual mastery and excitement.”

Of course we should innovate, and we should not necessarily be tied to traditions that no longer serve us. But the notion that there is a simple, single approach to the infinite complexities of higher education is a fantasy. And to mock hard-working educators because it makes for good PR in The Globe and Mail should be beneath the dignity of a university president.