Double and triple threats: When an extra degree pays off

As Ph.D.s struggle to find work, some professionals are going back to school to get third and fourth degrees 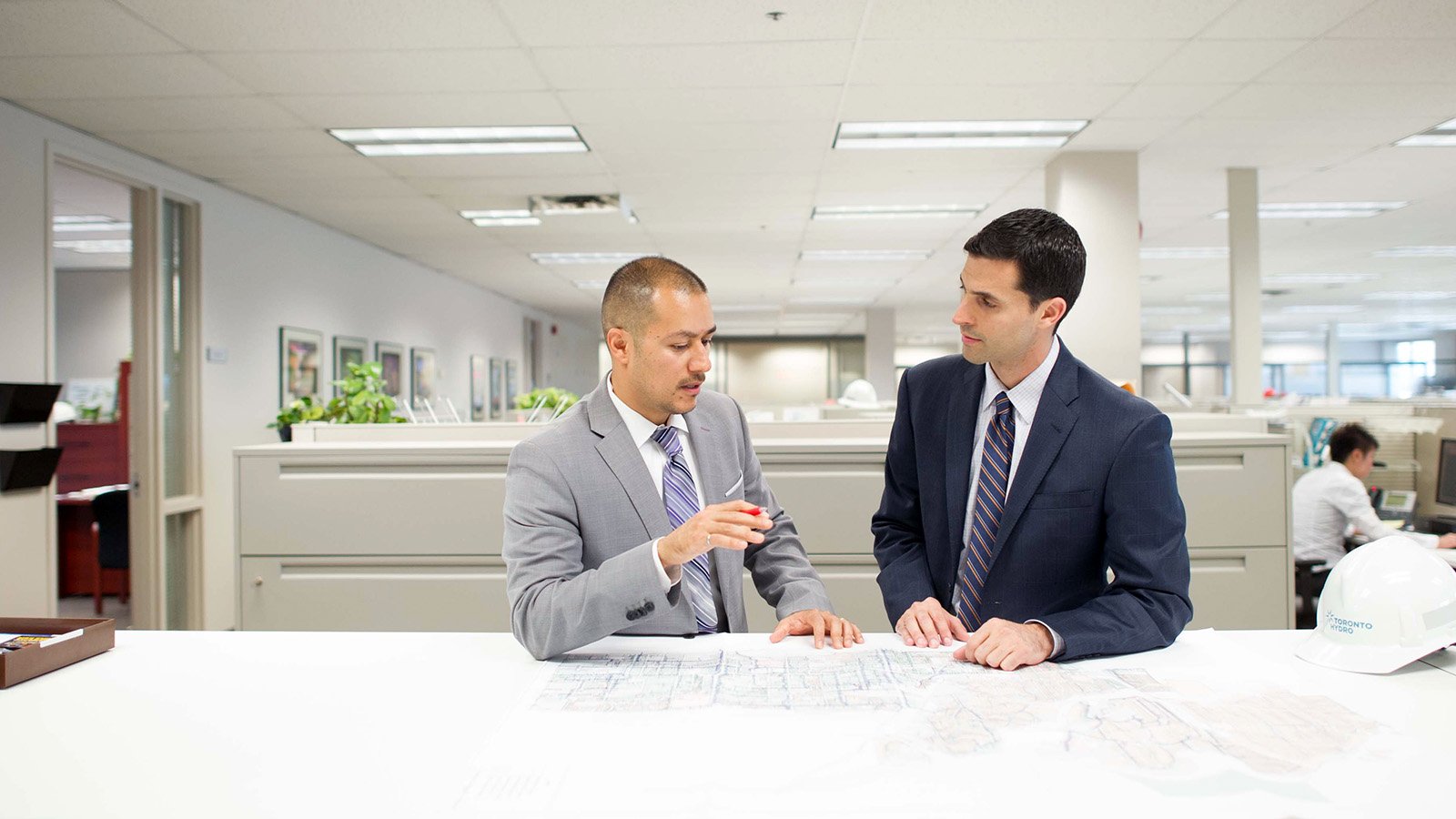 Sam Sadeghi’s career seems to be on a trajectory that only goes up. The electrical engineer has been working full-time in his field since graduating with a bachelor’s degree from Ryerson University in 2004. He continued to work full-time while pursuing a master’s in power electronics, which he earned from Ryerson in 2008. The only time he didn’t work was when he took a four-month leave in 2009 to take core courses for his master’s in business administration at Wilfrid Laurier University.

At 33, Sadeghi is the manager of the program delivery group at Toronto Hydro, where he has worked since 2011. He enjoys a spacious office and has his eye on an executive position. Sipping green tea—despite all those late nights of studying, he quit coffee a decade ago—he says he always had an entrepreneurial spirit, but took it a step further when his wife lost her job in 2009 and decided to go back to school for an M.B.A. He tagged along.

Sadeghi is part of a growing group of young professionals who are getting two or even more professional degrees to get a leg up in a labour market where Baby Boomers are hanging on to their jobs and just about every candidate has an undergraduate degree or even two. Universities are responding by offering combination programs across disciplines at the graduate level.

Taking a professional degree, especially an M.B.A., alongside another can be a “wonderful combination,” says Benjamin Tal, a CIBC World Markets economist who studies the costs and benefits of higher education.

“You have to distinguish yourself. That’s what the labour market is requiring now. I think that, without it, you will get something much less than what you want.”

Tal’s research has shown that graduates are getting fewer benefits in the form of income and employment from a university education today than they did in the past. Tuition increases are a big factor, and the pay varies among fields of study. But today, unlike 10 or 15 years ago, a university degree is necessary but not sufficient to get a good job. Tal says he doesn’t see employers emphasizing “soft skills” such as critical thinking as much anymore. Instead, they want to see experience, skills, and a piece of paper—possibly more than one.

Sadeghi believes the investment in his M.B.A. was worth it, but when he started his studies, he wasn’t so sure. As supervisor to 30 placement students, he counsels them to do a lot of soul-searching, and researching, before shelling out for a postgraduate degree. 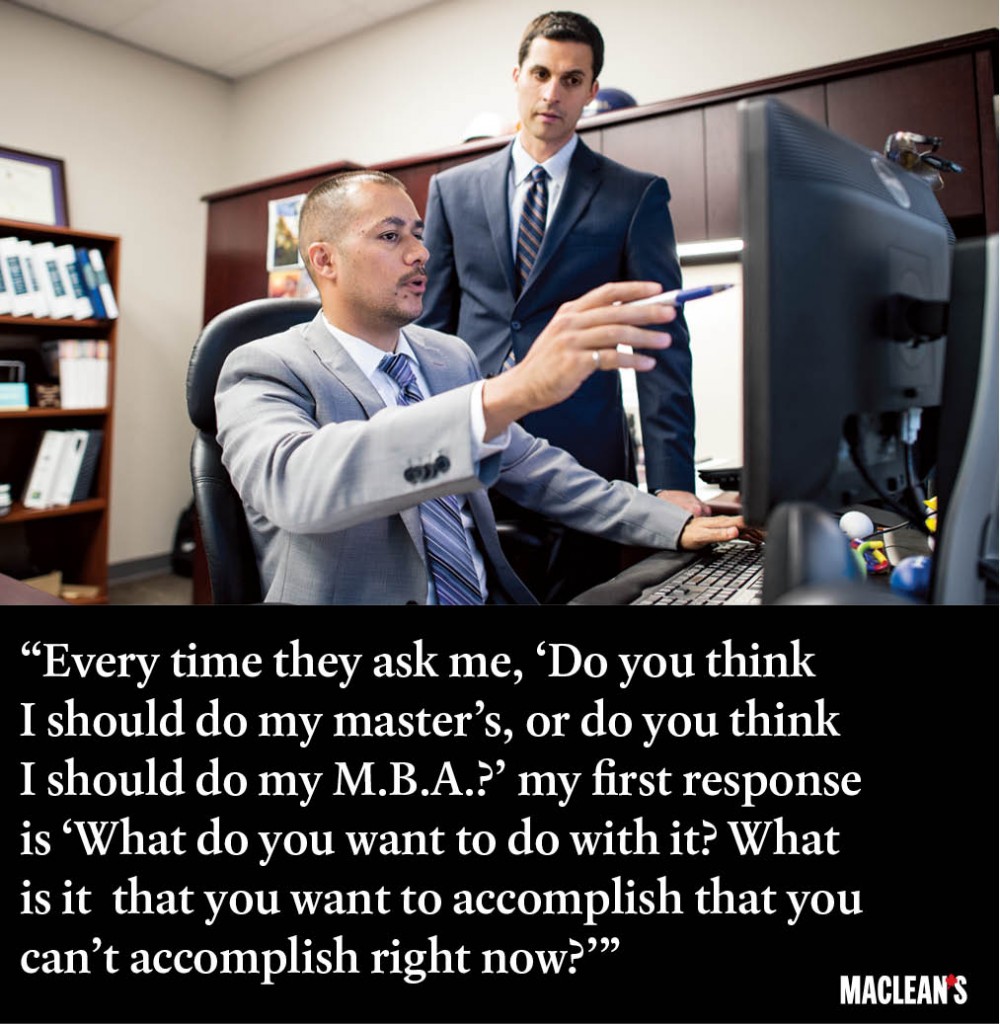 Sadeghi earned his M.B.A. in 2012, and says business school taught him how to clearly communicate technical matters to non-engineers. His current job provides an “ideal balance” between his engineering and business skills; he has to understand the technical aspects of setting up capital projects, and determine if they’re financially feasible. But he doesn’t paint himself as particularly impressive, especially not when compared to one of his colleagues.

Elias Lyberogiannis, 35, works down the hall from Sadeghi as Toronto Hydro’s manager of long-term strategy and planning. With a veritable alphabet soup of letters after his name, it’s hard to imagine his credentials fitting on a standard business card. Lyberogiannis also had a bachelor’s in engineering when he started an engineer training program at Hydro One in 2002. A rotation in the asset-management division piqued his interest in the business side of things, so an M.B.A. was a natural next step. While he was studying for that part-time and working, he learned it would take just a little more course work and an additional exam to earn the Certified Management Accountant designation. So he went for it. In the midst of his business studies, he was promoted into management at Hydro One.

His life was going great. He spent 3½ years as a manager. But, the more he rose in the ranks, the more his work crossed over into other disciplines, namely, regulatory issues and litigation. When he realized he could make it work financially, he decided to go to law school.

His family and friends thought he was nuts. Lyberogiannis believed a law degree would make him uniquely marketable in the corporate world. “I’d sat down and run some calcs, obviously,” he says. “But part of it was the confidence I had in myself.” He found himself unexpectedly interested in law, but, after he did his articling year at a firm in Toronto, he decided it wasn’t for him. He wanted to apply all his skills and experience. So he took a job with the legal and regulatory group at Toronto Hydro, for a lower salary than he made before going to law school. He loves it, and he feels his career will continue to progress. He was able to finance without loans all of his education after undergrad, but he took three years out of the workforce for law school. Taking inflation into account, he still hasn’t made it back to the income he made before he went. “It’s really difficult to jump back on a horse,” he says. “My analysis around the payoff period was too optimistic.”

In today’s hyper-competitive labour market, students often want to amass more and more education in the hopes of gaining advantage. “There is such a thing as overkill,” warns Tal, the economist. “At one point, especially at the Ph.D. level, you have a lot of people who are way overqualified and are actually finding it more difficult to find a job than people with a B.A. or an M.A. This person also graduates, at the age of I don’t know what, with no job experience.”

Five university faculty, deans, and program directors from across Canada agree there is a strong trend toward interdisciplinary university programs that create job-ready professionals who will have a broad set of skills to solve problems in any area—from engineering to medicine to law.

In law, it’s especially hard to stand out as a new grad, and adding an M.B.A. to your studies is a way to get ahead. A lesser-known route is a four-year program leading to a master’s degree in social work combined with a law degree. (Doing the programs separately would take five years.) “I, personally, think it makes them better lawyers, particularly if they want to do social justice work,” says Cheryl Milne, co-director of the J.D./M.S.W. program at the University of Toronto. The same combination is also offered at the University of Windsor. Although social justice is not the most profitable area of law, if graduates with this combination decide not to practise law, they’re fully qualified social workers.

That’s a fall-back option for Carina Chan, who is in her final year of the J.D./M.S.W. program at the University of Toronto. She plans to practise family law, focusing on child welfare, and says her social work training helps her understand the deeper social problems that affect families.

“I’m absolutely, very happy with my decision. It made my law school experience more meaningful and holistic,” she says, adding that it was a big investment. Combined-program students pay for three years of law school and one year of graduate studies, which works out to $104,000, with fees. Chan feels she’s helping to bridge the gap between the hyper-competitive field of law and the world of social work. “There’s so much cross-disciplinary learning that goes on when two sets of professionals are working together. If you can make it happen, it’s amazing for the clients.”

A clash of cultures is at the heart of another combined degree option: the M.D./M.B.A. Medical school is arduous enough, so those who choose to add business studies on top of it are a “self-selecting group of high achievers,” says Vedat Verter, director of the M.D.-M.B.A. program at McGill University. And, although total tuition is well over $100,000 for out-of-province students, medical students accept that their career requires a big start-up investment. The financial payoff is a small part of the decision-making process, Verter says, since the majority of students go on to practise a medical speciality and make a healthy income doing so.

Verter says some medical school faculty see business studies as a distraction from the clinical experience medical students must gain during their studies. But he thinks they’re wrong: Business skills, like cost control and time management, help doctors run a medical practice and put them on the path to health care management.

Sam Waserman is a high achiever hoping to marry his medical and business skills. He had a double major as an undergrad in life science and economics, and holds a master’s in international health policy and management. Now, he’s beginning his fourth year of the five-year M.D.-M.B.A. program at McGill. He’s planning to practise medicine, and he’s confident the combination degree will put him on the right path.

“It’s an additional year of my life and $60,000 of tuition,” he wrote in an email from his clinical placement in Israel. “There may not be an immediate return on investment. In the future, however, when I have my own practice, I’m confident I’ll have the tools I need to run it effectively.”