For the record: Stingers' hockey captain on resilience and teamwork

At the Maclean's-Concordia Town Hall on the future of education and the future of work, a student panel talked about how university prepared them for the working world. 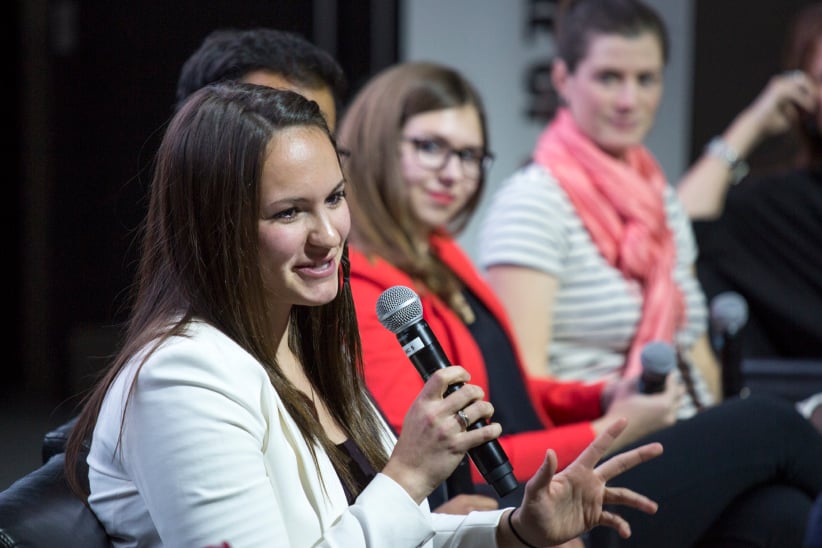 Athletic therapy master’s student Erica Porter explains how five years as a member of the Concordia Stingers hockey team taught her teamwork, how to take criticism, and, as the team’s captain, leadership skills. (Photograph by Nick Iwanyshyn)

The Maclean’s-Concordia town hall on the future of education and the future of work featured a student panel, designed to highlight a slice of university life for high school and CEGEP students. Here is an edited and condensed transcript of Maclean’s editor of special issues Kim Honey interviewing student athlete Erica Porter about teamwork, leadership and taking criticism on and off the ice, and how that set her up for success.

I’ve got some of my teammates out there encouraging me. So last year was my last year playing hockey, because you’re only allowed five years of eligibility. And I got to end it on a great year, being the team captain.

Kim Honey: Yes. And you told me a story, an amazing story about your cross-town rival, McGill. I want you to tell the audience about that.

Erica Porter: So in my fourth year – two years ago – we always had a grudge playing against McGill. And unfortunately, it had been 51 games that Concordia had not beat McGill. So that 51st game we ended up beating them. We shut them out. We won, 1-0. And it was an epic moment for our team. We were super happy. I could have gone through my whole five years and never … beat them. But by working together as our team, we really pushed together to finally beat them.

Kim Honey: When Pierre Lafontaine was head of CIS, many times he heard business leaders say that, if they had two people interviewing for a job and one of them had been an athlete, they would choose the athlete over anyone else, in part because they knew how to take criticism. And we were talking earlier about how to take negative feedback.

Erica Porter: I’ve definitely gotten negative feedback towards my hockey skills when I was growing up. But I think to get to the level that I am now, you have to transform that into something. If you were just to give up, and take that negatively, you’re never going to be able to succeed or get to where you want to be in the future. So when somebody told me that I had hands like feet, if I didn’t work on that, then I would never have been able to get the ice time that I wanted in the future, and I’d just be sitting on the bench.

Kim Honey: Tell us a little bit about where you grew up and how many sports you played when you were a kid.

Erica Porter: I grew up in a little town called Coaticook in the Eastern Townships. And my parents always encouraged us to go outside and be active outside, and we were never allowed to have any video games or Gameboys or whatever in our house. And in the winters, we grew up by a big field, so my dad had enough room to make us a big skating rink in the back yard every year. And I also have two older brothers and an older sister, and we have a very active family, so we always were outside on the rink playing every day.

Kim Honey: Give me the list of sports you played.

Kim Honey: And you chose hockey because it was your favourite?

Erica Porter: I chose athletic therapy as my career, because I have a mentor back home who is an athletic therapist. She was very close to me, and I did a couple of job-shadowing days with her. And not only was she great at her job in rehabilitating athletes, but she was really good at working with the athletes and being there whenever they needed him. And so I always knew I wanted to work with people and help them get better. So working as a health care professional, but also being involved in the sports environment and watching games and still being a part of a team throughout my whole career, seemed to be the perfect fit for me.

Kim Honey: You are working as an athletic therapist right now, are you not?

Kim Honey: Do you figure you’ll be employed when you’re out?

Erica Porter: I hope so. My mentor has been giving me quite a few games back in Lennoxville, and I’ve been talking to her and they’re hopefully going to be giving me a more permanent position in the future.

Kim Honey: You were also captain of the Stingers hockey team, so you had to motivate people. Tell us a bit about how you figured that out.

Erica Porter: Trying to motivate a whole team, you can’t always come at it with the same tactics, there are going to be multiple personalities, multiple mind frames, different backgrounds and everything. So you can’t always try and motivate a whole group in the exact same way. If you are talking to a whole group, you can try and change it up. But if you really want to focus in on the person, if they’re having a bad game or if they’re having a bad week or whatever, you really have to look at their personality and try and figure out ways that you can help them get better.