Gambling on an M.D.

In 2013, most would-be doctors came from just six undergrad schools, even though they were the tougher, more competitive ones 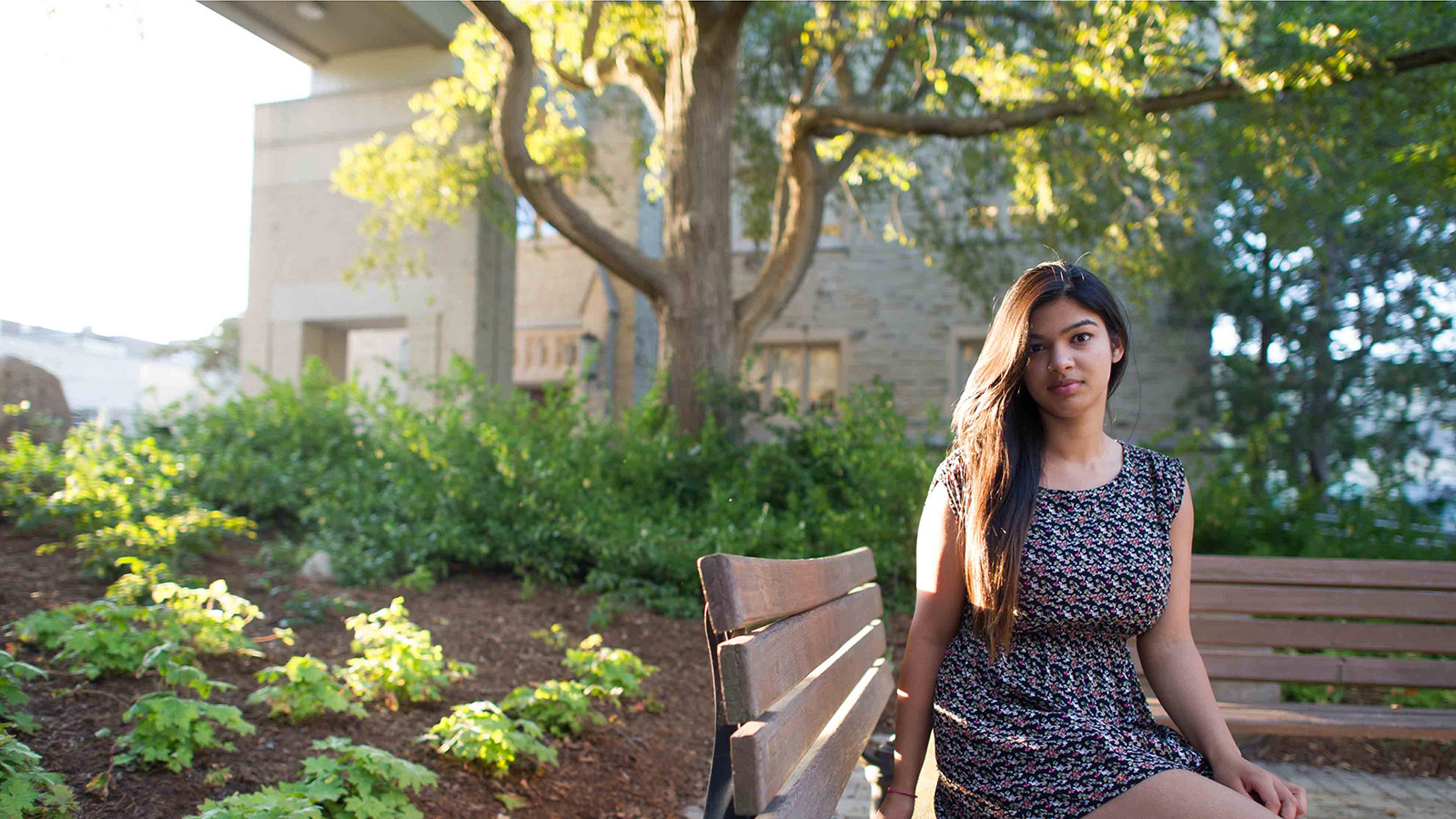 After a tough first year in the bachelor of medical sciences program at Western University, Parima Saxena thought she might have made the wrong choice. She finished with a 2.8 grade point average (on a four-point scale), the equivalent to a grade in the low 70s. That wasn’t bad for such a tough program, but it was not good enough to give her a shot at medical school, a goal she shares with most of the other 800 students accepted into the program.

Now the president of Western’s pre-med club, Saxena is heading into her fourth and final year. Her grades have recovered and she logged a 3.7 this year, but she still wonders if she might have managed a higher GPA at a different school. She has heard it’s easier to get stellar marks in similar programs at Brock University or the University of Waterloo, for example, because they’re smaller and, therefore, not as competitive. At Waterloo, they take 230 students into the bachelor of biomedical science program each year, with a minimum of 81 per cent, while Western requires marks in the high 80s and low 90s from its much larger first-year class.

For high school students who want to be doctors, one of the most anxiety-provoking decisions is where to get their first degree. After all, the applicant who finishes a bachelor’s with an 87 per cent average may have her pick of medical schools, while someone who achieves 82 per cent might not get into any. Some students find advice in online forums such as PreMed101.com; others ask older students like Saxena. There are plenty of opinions—some swear the University of Toronto’s life sciences is so hard, it should be avoided at all costs—but little data to back up the rumours.

When Maclean’s asked Canada’s 14 English and bilingual medical schools where their first-year M.D. classes had most recently studied, all but three (University of Ottawa, Northern Ontario Medical School and the University of Calgary) answered the request. While the sample is small, there is a pattern that will give those who dream of being a doctor one fewer thing to worry about. 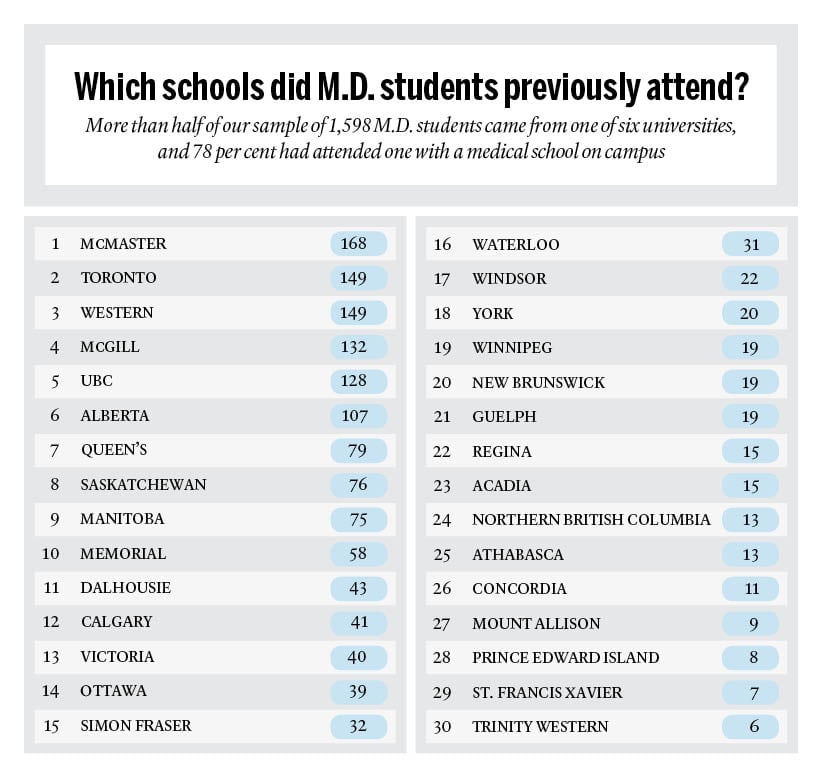 Dr. Marc Moreau, assistant dean of admissions at the University of Alberta’s medical school, says that, aside from in-province quotas (85 per cent of first-years must be Albertans), U of A gives no extra weight to any university. But he has a theory about why students think tougher schools will hurt their chances at med school, when the students who attend those same schools are more likely to get in. Although some students will find the University of Lethbridge (where entrance standards are lower and classes are smaller) easier than the University of Alberta (where they’re likely to have more competition for high grades), it won’t necessarily help them in the long run.

“A student at Lethbridge may have an easier time in a physics course than at U of A,” he says, “but you may have a better prof at U of A and do better because that prof makes you work harder.”

Evidence of hard work is something admissions committees are looking for more than ever as they rely less and less on grades. At U of A, grades make up only 30 per cent of the admissions criteria, “and it may be lower next year,” he says. The rest is a combination of things such as the Medical College Admission Test, employment history, awards, evidence of leadership, proof of volunteerism and “diversity of experiences.”

More of the best job opportunities, volunteer positions and “diverse experiences” can be found in larger cities, which happen to be where most of the medical schools are. The student who chooses U of A might get lower grades than if he had gone to a school where there’s less competition, but he may also have more access to medical research internships at teaching hospitals that could impress admissions committees.

That still doesn’t explain why so many undergrads are clustered at just half a dozen schools. Tim He, president of the Medical Direction McGill, a pre-med club, guesses that half of those first-year medical students came from a handful of universities in 2013, because the best and brightest high school students apply mostly to the top-ranking universities. Indeed, five out of six of the schools that medical students are most likely to have attended are ranked in the top six in the Maclean’s University Rankings, and all do well in international competitions.

On top of that, many high school students tend to go places where the entrance requirements are toughest because of the prestige of getting in, says He. McGill’s minimum entrance grade for out-of-province students enrolling in science in 2013 was 92.5 per cent in the top five courses—much higher than the low 80s in six courses needed at Brock or Waterloo. The top students in He’s Calgary high school aimed for U of T, McGill, UBC or Alberta; he applied to all those except U of A, because he wanted to live in another province.

Dr. David Snadden, an executive associate dean at UBC’s medical school, says rankings and entrance grades cause students to cluster at a few schools, not because medical admissions committees prefer them. “We really try not to discriminate in any way about which school people have come from,” Snadden says. While it’s true that UBC’s medical school takes more students from UBC (107 last year) than from the University of Victoria (32) or Simon Fraser University (30), “we have many, many more applications from UBC.” They also take many from McGill (21) and McMaster (14) for the same reason.

So while M.D. students shouldn’t worry about avoiding “hard schools,” they also shouldn’t fret if they haven’t attended one of the six schools where so many have gone before, so long as they’ve done everything they can to round out their education with a rich resumé. A university with a medical school may be a better bet, according to this small, unscientific sample—but, then again, at least 15 came from Acadia University in tiny Wolfville, N.S., another 15 from the University of Regina, and 13 more had studied at the University of Northern British Columbia.

Dr. James Rourke, dean of medicine at Memorial University of Newfoundland, finds students who attended Memorial for their first degree tend to be the top performers in its medical school. Memorial doesn’t discriminate based on school, either, so future doctors should just pick a university where they think they’re going to thrive. “Some do well at a big, bold university like McGill or U of Toronto; some do better at a smaller, more personalized university.”