Haligonians have been big fans of Clinton since her speech at Halifax's almost-all-female school, Mount Saint Vincent University 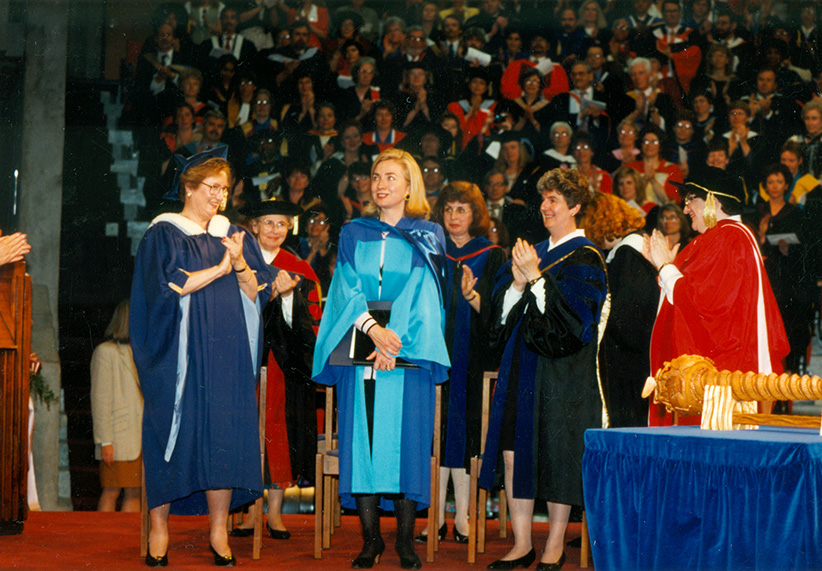 Hillary Clinton’s supporters tout her as one of the most qualified presidential candidates in U.S. history. Canadians, however, may not have heard about one of her more obscure diplomatic competencies—she knows the preferred name for the people of Halifax.

“I am . . . newly informed that those who live in Halifax are called Haligonians. Now, I hope I was rightly informed, because I think that is the most remarkable word and I intend to use it many, many times.” The packed auditorium broke into laughter that gave way to applause.

It was June 15, 1995, and earlier that day, the U.S. first lady and president Bill Clinton were greeted on the tarmac at the nearby Shearwater airport by a small, enthusiastic crowd waving Canadian and U.S. flags.

Former prime minister Jean Chrétien’s relatively unglamorous G7 economic meeting, dubbed the Chevrolet Summit, was the foremost reason for the Clintons’ Nova Scotia trip. But Hillary Clinton, who would deliver her famous “Women’s Rights Are Human Rights” speech to a United Nations conference in Beijing a few months later, had a few agenda items of her own.

She had been invited to a special convocation ceremony at Mount Saint Vincent University to receive a doctor of humane letters—what appears to be her only honorary degree from a Canadian institution to date. (Clinton’s campaign did not respond to a request for confirmation.)

In her 21-minute address at the Mount, one of Canada’s oldest predominantly female universities, Clinton focused on women, the tough choices they face and the strong connection between educating females and socio-economic progress overall. “There still are so many of us who each day feel as though we are writing and living a new sonata, that we are attempting to bring disparate notes, harmonies and melodies together to make a tune that does some justice to the complexity of our own experience,” Clinton said. “So against a rather complicated backdrop, we see even more importantly the role that education can play in helping women make the composition that is right for them.”

At the time, Halifax’s Chronicle Herald reported that Clinton received two standing ovations from the crowd at the 1,000-seat Seton Academic Centre auditorium.

More than 21 years later, Haligonians haven’t forgotten. Bedford MLA Kelly Regan, Nova Scotia’s minister of labour and advanced education, didn’t enter politics until 2009 but attended the ceremony with her spouse, fellow Liberal and Halifax West MP Geoff Regan, who is now the Speaker of the House of Commons. “In terms of her speech, she was funny,” she says. “She made a lot of local allusions and then she just spoke very, very eloquently about the lives of women.”

President Ramona Lumpkin is struck by how many women recall “what a transformative experience it was to hear her talk and to see her leadership so strongly on display.”

Some of the people in the audience that day were watching when Clinton and Donald Trump had their first debate in September. “I have followed her career since then and am not surprised she is a candidate for the U.S. presidency,” says MSVU alumnus Anna Butland, a retired member of the National Parole Board. “Her speech then impressed me as much as her debate did [now].”

Behind the scenes, security was extremely tight, recalls Rosemarie Sampson, the former dean of professional studies, who organized the convocation. Clinton’s people took over her office as a communications area and university staffers were vetted by security. Sniffer dogs were deployed to the auditorium. It was unlike anything they had ever experienced—and this was pre-9/11. “I think as Canadians, we weren’t really used to this,” she says.

Former MSVU president Elizabeth Parr-Johnston says they chose to honour Clinton because her characteristics, accomplishments and abilities embody the vision of the Mount. “At that time they embodied them, and now even more.” A trailblazer in her own right, Parr-Johnston holds a Ph.D. and is a member of the Order of Canada, serving in many high-profile roles in the civil service and at Canadian universities. She and Clinton are both alumni of another women’s school, Wellesley College in Wellesley, Mass., as well as graduates of Yale University. She says if Clinton becomes the first female U.S. president, it would be “miraculous.”

“I had no doubt, from the moment I learned of her and started following her career—what she was doing, her interests—that [the presidency] was a real possibility,” she says.