How a University of Alberta student built himself his dream job 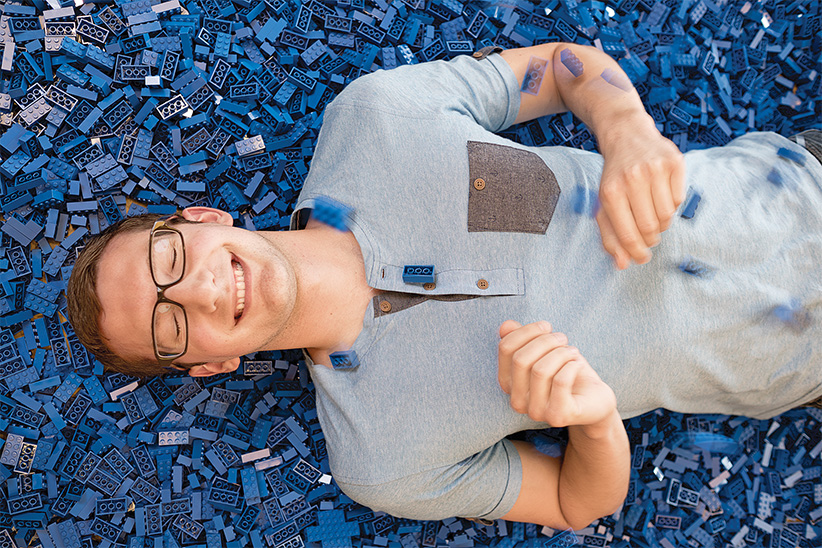 Brick by brick: Edmonton’s Chris Perron took 14 rejections before he got hired (Photograph by Rasmus Degnbol/Redux)

Moving your life to the other side of the world is a daunting task. Moving 230,000 tiny pieces of your life is something else entirely. But for Edmonton native Chris Perron, it only made sense to pack up his vast Lego collection and bring it to Denmark after accepting a design job at the very company that made them.

As a child, Perron remembers sitting in his uncle’s basement trying to build a castle with his cousin’s Lego; the next Christmas, he got his very own City Hovercraft set. It’s safe to say the building blocks became an obsession after that. He didn’t need instructions: Perron built outside-of-the-box sets, crafting fantastical spaceships and buildings that sprang from his imagination.

Fast forward to age 22. As an industrial design student at the University of Alberta, Perron got a job as a supervisor at the one and only Lego Store in the city at Southgate Centre, where he worked for three years. Lego, he says, was a “back-of-mind reason for going into design. It was a couple of years in when I started looking into it really seriously, and I was like, ‘This seems actually plausible. I’m going to try to do this.’ ”

So he started applying. And applying. In all, he applied to 15 different design jobs posted online by the toy manufacturer, each time submitting a portfolio of his design work and some of his best Lego creations. Twice, he ﬂew to Lego headquarters in Billund, Denmark, to take part in recruitment workshops, design challenges, presentations and interviews. One of those trips ﬁnally paid off. Three years and 14 rejections later, he got what he describes as a “surreal” phone call offering him his “dream” job as a junior product designer. Basically he gets paid to build the otherworldly creations he used to make for fun, and decide which bricks, bushes, round plates and angle arms will ﬁll the boxes lining the shelves of the store.

He says “it took a few hours, or days, even, to settle in; to be like, ‘Huh, this is actually happening now?’ ” Less than three months later, the 25-year-old and his ﬁancée were applying for visas, packing up hundreds of thousands of pieces of Lego and moving to Vejle, a 40-minute bus ride to Billund.

Perron credits his post-secondary education for teaching him how to build Lego with purpose. The study of industrial design centres on creating products that optimize function, but that are still nice to look at. “Building Lego as a hobby, you’re often designing for yourself,” Perron says. “But [industrial design] is when you start looking at it more from a  [perspective of], ‘Who’s this actually intended for?’ You just approach it differently and you start thinking and you ask yourself those different questions.”

Perron says that while he didn’t incorporate Lego all that much into his school assignments (though he did build a series of wooden dinosaur toys reminiscent of 1930s Lego), he was constantly thinking about the modular principles that Lego had taught him. He would put each of his designs together piece-by-piece with the idea that they could be taken apart to make something new—he’d turn tables into chairs into lamps, which really isn’t so different from the little kid who turned spaceships into dragons into robots.