Training the next generation of comedians, one gag at a time

Humber College's comedy program is proving that while you can't teach being funny, you can teach people how to get a laugh 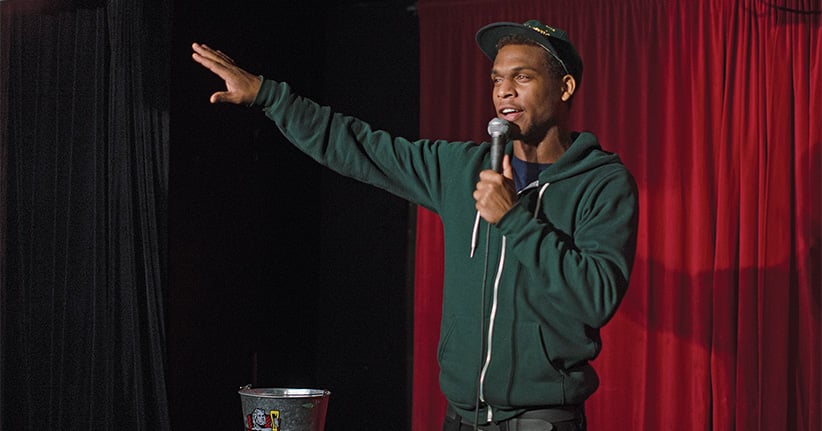 Chris Robinson got his first road gig at the end of his two-year course: ‘$150 at a strip club,’ he says (Scott McClean)

When you tell someone you are in the Humber College Comedy Writing and Performance program, the most common follow-up question is: “That exists?” One forgives the incredulity. After all, comedy school sounds like the sort of thing that 1) couldn’t exist, 2) shouldn’t exist, and 3) wouldn’t teach you much if it did.

That, incidentally, leads to the second-most-frequently asked question: “Can you actually teach someone how to be funny?” I admit it sounds doubtful. And yet, a little less than three years ago, at 24, I drove to Etobicoke to audition for this peculiar experiment.

There I discovered Humber College’s Lakeshore campus, quaint old buildings connected by stone walkways resembling battlements. If it looks like a cross between a nunnery and a fortress, that’s because it used to be an asylum. Administration has installed the comedy program several blocks away from Fort Lobotomy.

At the audition, we had to perform a stand-up set. I had never done stand-up, so I figured I’d wing it. If you ever decide to get in front of a microphone and attempt to make people laugh, do us both a favour: sit down, write some jokes, and practise telling them. As I stood there tossing my noun-verb salad, I began to wonder whether this was really for me. Did I possess that internal rhythm of self-loathing and arrogance that compels a person to dance in the shadow of rejection?

I guess that brings us to the third-most-common question people ask when you tell them you’re doing a two-year comedy diploma:“You must meet some interesting people, huh?” 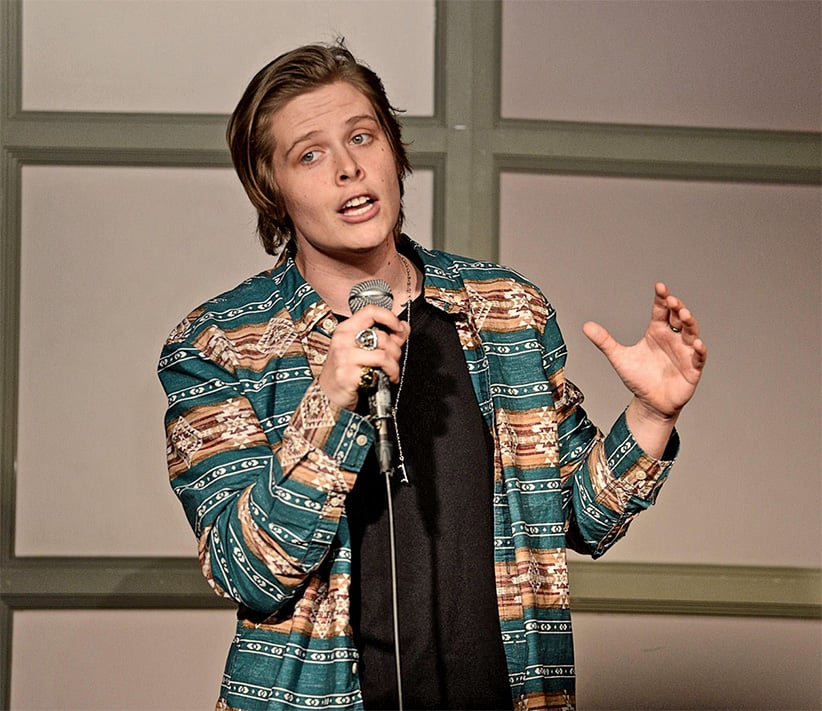 Are they going to ‘heckle the cancer kid?” quips Benett Carlton (Marco lappano)

At the end of her senior year in high school, Benett Carlton was diagnosed with a low-grade form of brain cancer. She had planned to train as an underwater welder, but her diagnosis meant she had to stay with her family in Sarnia, Ont., while she underwent radiation therapy. Or, as Carlton puts it, “I had to do tumour s–t.”

Now 25, Carlton just graduated from Humber Comedy this past May. Getting diagnosed changed her priorities. “What’s the point of going to work just to pay the bills and live a little while and die?” she says. “If I can’t get the most out of my life, I want to help others get the most out of theirs by being funny.”

High energy by nature, Carlton honed her comedic instincts early on. “I’ve always liked to get reactions out of people,” she admits, “whether it’s eating a bug or telling a joke. Maybe it’s growing up with three siblings, having to fight for attention.”

Family support has obviously been important; her mother moved out west to become an iron worker and help pay for her pills. “She’s a badass,” Carlton says. “At first my parents wanted me to do something else, but after the stuff with the tumour, they said, ‘You should go to comedy school.’ ”

She hopes to work in TV and film like her heroes Molly Shannon, Chris Farley and Jim Carrey. “Stand-up is my go-to,” she says, “but acting is a big passion of mine.”

Asked if she thinks she’s strong, she quips she’s good at pretending. “I’m thankful to have this tumour,” she says, “because otherwise I wouldn’t be where I am. Plus, it makes for great material. Even if I bomb, what are they gonna do? Heckle the cancer kid?”

Whoever said you can’t make a living telling jokes, Chris Robinson didn’t get the memo. If you’re looking for someone to watch in Toronto comedy, he’s it. After nine years doing stand-up, Robinson is building quite a resumé. He appeared at Just For Laughs this year, and placed second in the Homegrown Comic Competition.

For Robinson, there was no real doubt. “I did one of those online career tests in high school,” he says, “and it came out ‘stand-up comedian.’ ’’ He enrolled in comedy right after graduating from Central Peel Secondary in Brampton, Ont.

Robinson has confirmed himself as a professional in a field where most remain perpetual volunteers. How does one break into the Fort Knox of careers? “I did the Nubian Show [at Yuk Yuk’s] at the end of my second year at Humber,” Robinson explains. “That solidified me as, like, a good comic. It got me my first road gig: $150 at a strip club.” This illustrates a point that aspiring comics should bear in mind: even if you’re successful, the unsexy reality is inconsistent progress. He says, “I would get $50 for a gig, then it was another month. [But then] someone would call and say, ‘You wanna drive five hours for $200?’ And I would be like, ‘You just saved my life.’ ”

The lows come with much-deserved highs. For Robinson, that meant getting to perform with one of his heroes at Just For Laughs: Jo Koy, a stand-up known for his appearances on Chelsea Lately and The Tonight Show with Jay Leno. “I got a list that morning, and it was like . . . Alonzo Bodden, Jo Koy, J.B. Smoove. I couldn’t believe it. I went up and killed. Then Jo Koy came up to me after and congratulated me.” Another high was landing a role on the TV series Almost Genius on Country Music Television.

No doubt the greatest high of all was welcoming a son into the world, which he and his girlfriend did just eight days before our interview. I pointed out how rare that is for a comic who’s not yet 30. “My girlfriend is a photographer. She understands the hustle. I feel like you shouldn’t have to give up your dream to start a family.” Robinson’s advice: “You have to realize most people don’t get anywhere for 10 years. Until then, keep grinding.”

If you ask Robin Duke whether she can teach someone to be funny, she’ll tell you she can’t. “But I can teach them how to get a laugh,” she insists, “through wording, dialogue, timing. I mean, you can’t teach someone tone-deaf how to play music, but if you’ve got a bit of a skewed view of the world . . .”

Duke’s teaching career at Humber College began in 2004, but her career as a writer and performer encompasses Second City in the ’70s, Saturday Night Live in the ’80s, and roles on TV shows such as CBC’s Schitt’s Creek today.

In a way, Duke’s career goes back even further. “When I got into Grade 9, I met Catherine O’Hara,” she says. “Finally, someone on the same wavelength.” Both Duke and O’Hara went to Second City. Up till then, “There was no comedy,” she says.

Duke took workshops with the improv guru Del Close, who gave Duke her first real break when he cast her in the Second City touring company: “He just picked the first seven people who came walking through the door.”

Duke was in the right place at the right time for Saturday Night Live. O’Hara had preceded her, but didn’t want to stay on. She told Duke to fly to New York to audition. The audition never took place. “They kept me hanging around all day . . . Finally Catherine said, ‘Tell him [the producer] you have to go, and you need an answer now.’ So I did, and he said, ‘Okay, you’ve got the job.’ ” She stayed from 1981 to ’84.

“It’s feast or famine,” Duke says. “When I was at SNL, I thought it was going to last forever. I learned: No.” Duke started to create her own work, something she encourages her students to do. In 2004, she founded the sketch troupe Women Fully Clothed. Now, she is working on her memoir My Funny Life and How Improv Got Me Through, as well as a one-woman show about breast cancer.

Of course, she will continue to teach improv to the comedians of tomorrow. “The great thing about this business is you can always reinvent yourself.”