How Indigenous scholarship winners are busting myths and stereotypes 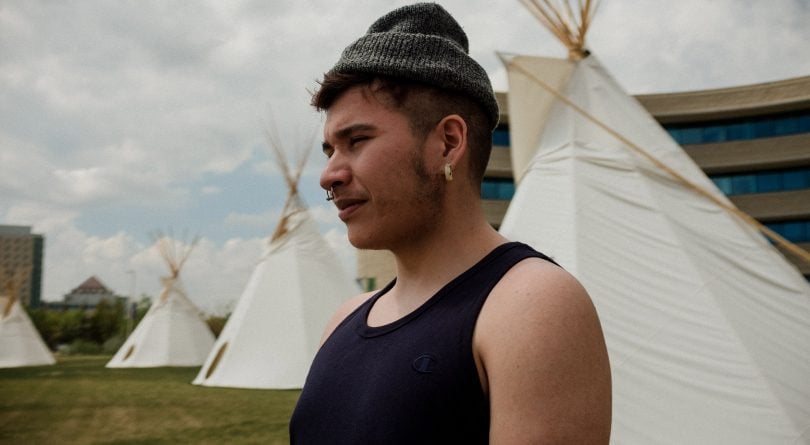 As a child raised in the protective embrace of the Driftpile Cree Nation in northwest Alberta, Billy-Ray Belcourt recalls that “right from elementary school, I was incredibly bookish. I cared a lot about my studies. I was one of those students who would ask for more homework.”

Now a 23-year-old doctoral student at the University of Alberta, Belcourt has already garnered national recognition as a prize-winning poet and the first First Nations student to win a Rhodes scholarship. He attributes much of this early success to his grandmother, whose unconditional love and wisdom “helped us to survive the world outside the reserve and our Indigenous community, but at the same time to be proud of who we were.”

Of the many accolades that have come his way, Belcourt says he was especially touched to be chosen as a youth recipient of the 2019 Indspire award, the highest honour that Canada’s Indigenous community bestows. “It’s particularly meaningful to me because . . . it comes directly out of a desire to enable Indigenous people to flourish and to highlight the accomplishments of our people,” Belcourt says.

“This year’s recipients have walked in two worlds,” says Roberta Jamieson, president and chief executive officer of Indspire, a national charity that supports Indigenous education and advocates for broader public support to improve overall education outcomes for First Nations, Inuit and Métis people. Jamieson, a Mohawk from the Six Nations of the Grand River and the ﬁrst First Nations woman to earn a law degree in Canada, says, “We are also very mindful that in telling their stories and honouring these individuals we are educating Canadians [and] we are busting myths and stereotypes.”

The other 2019 recipients in the youth category are Kelly Fraser, a Juno-nominated Inuit singer and songwriter, and Métis athlete James Lavallée, an environmental science and ecology student at the University of Manitoba and a world-class kayak and canoe competitor.

Maclean’s talked to Billy-Ray Belcourt, along with two past Indspire youth award recipients, about their stories.

At the close of a creative writing workshop that Belcourt does with prisoners, an incarcerated First Nations man remarked to him “that he did not even know native people could be poets—he thought [poetry] was something that occurred outside of our community,” Belcourt recalls. He describes this as “a breakthrough moment” for the student and for himself. His role, he realized, was not only to teach others how to write, “but also to invite them to widen their ideas about what is possible.”

Growing up, Belcourt was excited by the prospect of attending university, especially after devouring Métis author Beatrice Mosionier’s powerful novel In Search of April Raintree, one of the books his older sister had been assigned in native studies class at college. “I wanted a glimpse into the intellectual world of post-secondary education, to read and to be moved, irreparably and unsuspectedly,” Belcourt wrote in a recent essay. “With In Search of April Raintree, I found all of this.”

With financial support from his band, Belcourt studied comparative literature at the University of Alberta, although he found it was a wrench to leave his community. “I was only 17 when I started; it was my first time away from home. My first week, I actually considered dropping out because it was such a radical shift for me,” Belcourt said in a video posted on the U of A website in 2016 after the young Cree student had been selected as a Rhodes scholar.

One of the most enriching aspects of Oxford, where Belcourt studied the role of Indigenous women in social resistance movements, was being part of a “distinctly global community that I would never have been part of had I not won the scholarship,” he says.

Back at the University of Alberta, Belcourt is a doctoral student in the department of English and film studies, supported by a Trudeau Foundation scholarship.

On his return from England, Belcourt noticed that U of A, like other Canadian universities, had made some headway in attracting more Indigenous faculty members and supporting departments of Indigenous studies in response to the Truth and Reconciliation Commission’s 2015 recommendations. “That absolutely does inﬂuence whether the university is hospitable to Indigenous students. Whether we see ourselves in front of the classroom is vitally important; it allows us to see ourselves as the holders of knowledge,” Belcourt says.

When Belcourt won the prestigious 2018 Griffin Poetry Prize, adjudicator Sarah Howe described his book, This Wound is a World, as “a moving and thoughtful meditation on what it means to move through this world in a queer and Indigenous body and what it means to summon a voice to speak and sing from that place.” 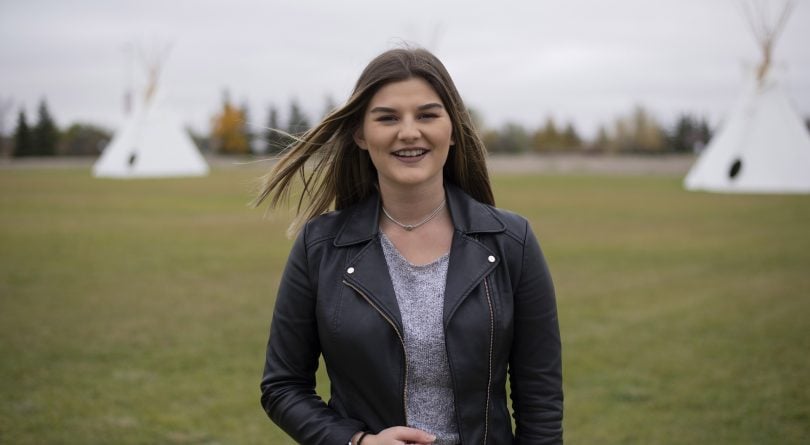 Now in her third year at the University of Regina studying to be a social worker, Léost spends much of her free time coaching in an outdoor recreational hockey league for young people who could not otherwise afford to play. “A majority of the youth involved are Indigenous youth. A lot of them come from foster care and group care and very challenging situations. Some have experienced horriﬁc intergenerational trauma from their parents having been in residential schools,” says Léost, a 20-year-old Métis woman and the recipient of a 2018 Indspire youth award. “So it’s not just about being a coach, it’s about being a mentor and providing a safe space. They’ll come out in the middle of a blizzard to shovel the rink, and when they step on the ice, they’re just one of the kids at hockey.”

“When I look into the eyes of these kids, I don’t see hardship, I see potential,” says Léost.

While Léost did well in school as a child, she was one of only a few Indigenous students throughout her elementary and high school years in St. Laurent, Man. “I always remember feeling isolated because I wasn’t like the other kids,” she says. It wasn’t until she took an Indigenous studies elective in Grade 11 that Léost became passionate about learning. Her teacher, an Indigenous man, took them through an extensive history of Indigenous people in Canada. “We didn’t do a lot of papers, we learned a lot orally,” she says. “It was like, ‘Let’s have a talking circle’ or ‘Do you want to go fishing or pick berries?’ ”

One of their projects was to research the life of one of Canada’s missing and murdered Indigenous women and girls. Léost was horrified that the federal government, at that point, had no plans to launch a national inquiry despite the thousands of victims. Her teacher challenged her to do something about it, inspiring Léost’s 115-km run from Oak Point, Man., to downtown Winnipeg to raise awareness. The teenager’s run attracted international attention when U.S. musician Cass McCombs asked if she would retrace her steps for a music video for his song Run Sister Run. “The videographer would set up on the back of my grandpa’s truck on a hay bale and they would drive and I would chase the camera,” she says.

It was that initiative, plus Léost’s tireless advocacy for better outcomes for Indigenous youth, that earned her the Indspire award.

The case for Indigenous role models 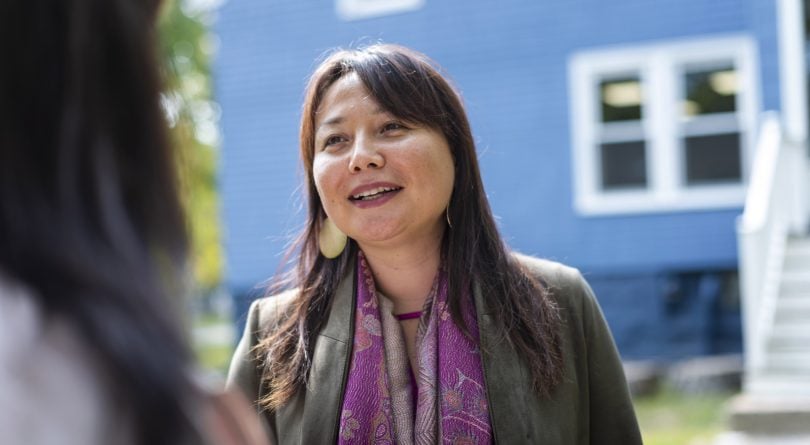 Elizabeth Zarpa won for her advocacy on behalf of the Inuit community (Photo: Dean Casavechia)

After graduating from Dalhousie University with a bachelor’s degree in international development and political science, Zarpa, an Inuit woman from Happy Valley-Goose Bay, Labrador, spent a couple of summers in Ottawa working for national Inuit organizations and wondering where to go next with her education. Law school, maybe?

She recalls that two of her colleagues, both brilliant Indigenous women, told her they were both taking a year off after encountering racism and discrimination at their law schools. “I recognized from those conversations that I needed to reflect on a place or a space in the country where I could potentially be surrounded by Indigenous people or Indigenous professors and [avoid] the deep hurt that my colleagues had experienced,” she says. “So I researched for a year or two, and the one place that kept popping up was the University of Victoria. All those really cool people who were Indigenous were on that side of the country”—law professors Val Napoleon and John Borrows, Indigenous governance professors Jeff Corntassel and Taiaiake Alfred, and political science professor Heidi Stark.

Within a week of arriving in Victoria for first-year law, Zarpa was named a 2013 Indspire youth recipient for her advocacy work on behalf of the Inuit community. In 2017, after completing her law degree and articling in Labrador, Zarpa wore a ceremonial silapak (traditional Inuit clothing) as she was sworn in as a lawyer. She now represents Inuit Tapiriit Kanatami, a non-profit organization, at the hearings into missing and murdered Indigenous women and girls, while pursuing a master of laws degree at Dalhousie.

MORE ABOUT RECONCILIATION ON CAMPUS: