On campus, there can be such a thing as a free lunch 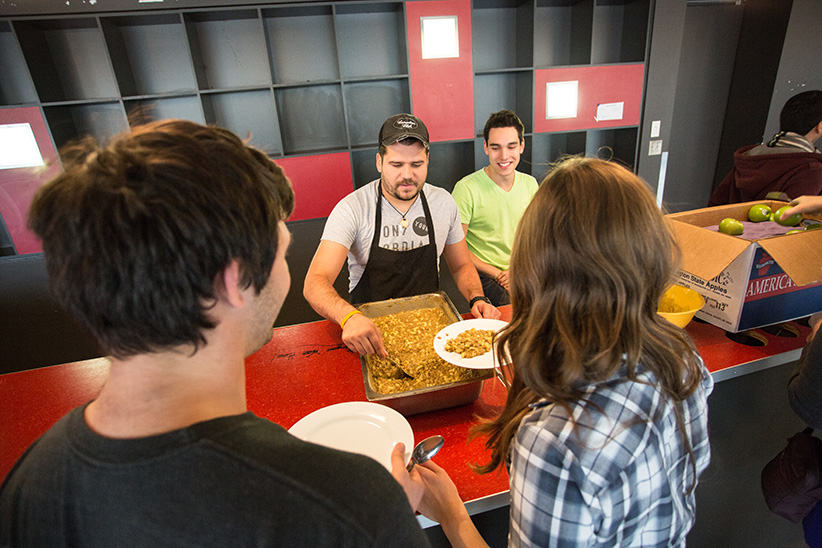 Vegan lunch: No one is turned away at People’s Potato soup kitchen at Concordia University

It doesn’t always have to be KD. Across Canada, hungry students are taking advantage of a growing number of innovative programs providing wholesome, low- or no-cost food options on campus. Here’s a look at a couple, plus some food-finding suggestions beyond the campus food bank.

Some campus groups serve up food solutions. At Dalhousie University in Halifax, for instance, the Loaded Ladle provides more than 200 free (donations accepted), locally sourced, vegan meals three days a week. The food-justice group is funded by students through their fees, though anyone can grab a meal or volunteer, and it’s very popular. “I think last week our lines went out the door of the student union building,” says Angela Hou, a Dal student and member of the Ladle’s board of directors.

Similar organizations operate at other schools, with most serving vegan or vegetarian meals in order to feed the greatest number of people. The People’s Potato operates a non-profit soup kitchen at Concordia University in Montreal. At OCADU in Toronto, students can get a pay-what-you-can meal (suggested donation of $3 or non-perishable items) through Hot Lunch, a weekly service provided by the student union. The donations support the Student Pantry, OCADU’s food bank.

Elsewhere, there are not-for-profit cafés, like the Seasoned Spoon at Trent University in Peterborough, Ont., which is independently operated and supported by members. It also offers workshops on canning, vegetarian cooking and cheesemaking for a nominal fee.

Food Rescue, an initiative of the campus non-profit Embark, has partnered with the nearby Nesters Market grocery store to collect fruits and vegetables with minor flaws and hand them out on campus. Students can take whatever they want for free or a donation.

Food Rescue launched in June and, a month later, had given away 200 lb. of produce through its biweekly, on-campus program. Embark plans to expand to SFU campuses in Vancouver and Surrey. “It’s been really successful,” says Ali White, programs director for Embark. “We got a lot of great responses and people are pretty stoked about it.”

If you have your nose to the ground, there are lots of ways to finagle food. In general, universities are perennial hotspots for free grub, whether it’s snacks, pizza or pancakes at presentations, alumni talks or receptions. But in order to take full advantage—and maybe gain some food for thought from that distinguished guest speaker—you have to know where to look.

One snag is that this info is peppered everywhere, throughout university and student-group websites, social media and campus bulletin boards. Savvy students, however, are relying on crowd-sourcing for intel.

Student-run social media accounts, such as the Free Food Locator Facebook group at Ryerson University, help members track down free canapes, even if they are the ubiquitous Triscuits with cheddar.

Bake sales are a low-cost way to get your fix and support worthwhile causes. At McGill University, student fundraisers offer one of the cheapest, most accessible meals around: samosas. Usually $1 each or three for $2, the flaky, veggie-stuffed Indian appetizers are so popular that students use dedicated Facebook groups to determine samosa co-ordinates throughout McGill. Audrey Carleton, a third-year sociology and environment major who is the student-living editor at the McGill Tribune, wrote about the samosa sensation and the online groups last year. She says there are still multiple samosa sales every day, but, “I think that the supply will never meet the demand.”

A slice of social justice

Whether it’s social justice, religion, student government, campus media, sustainability or sports, getting involved in a group presents a great opportunity. You can meet fascinating people (they may become your friends for life), learn valuable skills (which could fuel your career), and get a source of free food along the way, as they often offer snacks and pizza at meetings and functions.