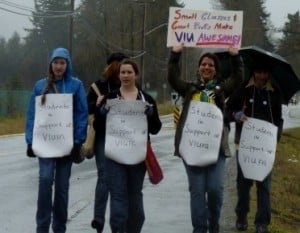 “At this point,” Dan McDonald said during a short break in collective bargaining Thursday afternoon, “it’s a bit like a snow day.” The president of the Vancouver Island University Faculty Association (VIUFA), whose members went on strike at 8:00am yesterday, wants to assure the more than 18,000 students whose classes are cancelled, that he is “hopeful” a resolution will be reached without jeopardizing the semester. The two sides, however, remain miles apart.

Job action was triggered over language in the collective agreement surrounding layoffs, which the union has said is a “deal breaker.” VIUFA, McDonald says, wants the university to agree to a clause that would see layoffs occur only if the administration were forced to declare a financial crisis. It would pretty much commit the university to a “no-layoffs” policy. When asked if the faculty bargaining team was willing to concede anything, McDonald’s answer was, “not at this particular point.”

The current collective agreement allows for layoffs “for reasons of demonstrable and substantial declining enrolment over a sustained period, and for reasons of a demonstrable need for program or service reduction, including the non-viability of non-teaching positions.”

Toni O’Keeffe, VIU’s executive director of communications, says the university isn’t planning on wavering from its position to retain the current agreement, unaltered, until 2012. “A no-layoff clause is a huge cost item, put off to the future,” she said. The British Columbia government has mandated that all universities and colleges bring forth cost neutral budgets this year. Earlier in the week, O’Keeffe said she anticipates there will be faculty or staff “reductions of some type.”

Despite a government appointed mediator taking part in Thursday’s negotiations, the stalemate continues. A media release from the faculty association issued last night, after the VIUFA president was interviewed, stated that the “strike continues” and that no further talks are scheduled. “We came to the table to focus on one issue–ensuring that there are no unnecessary cuts to courses at VIU. Unfortunately the employer has not changed its position,” a quote from McDonald reads.

O’Keefe says the university has been exploring options to complete the term if “the strike lasts longer than two weeks.” Students could see the semester lengthened, and/or courses could be held on evenings and weekends, in order to “compress some of the learning time that was lost,” O’Keefe said.

During the strike’s first day, hundreds of faculty showed up to fill picketing duties. “It was raining but the shifts were full,” McDonald says. They were joined by faculty associations from Vancouver Community College, Camosum College, and Langara College which has also threatened to strike. Dozens of students also showed up in support of striking faculty, wearing signs that read “Students in Support of VIUFA.”

Photo: Students show their support for striking faculty, by Sherry Wota, courtesy of The Navigator