Why pay tribute to war veterans when you can make divisive political statements instead? 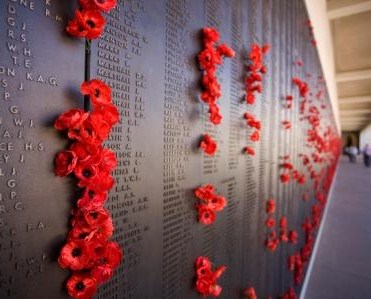 Today is Remembrance Day, where citizens across the nation pay our respects to the men and women who have served for Canada. Many people wear poppies as silent tribute to the war dead, pause for a minute of silence, and deliver ceremonial addresses in honour of Canada’s veterans. In some areas of the nation, however, these addresses tend to stray just a smidgen from the main point. Yup, just a smidgen. And on to campus . . .

Nick Day, Queen’s University’s student rector who has been elected to represent student views on social and financial matters to the university, delivered his laundry list of political talking points Remembrance Day address this morning at a Queen`s university-wide ceremony. Day began by telling the audience how his grandfather served in the Royal Canadian Air Force, fondly recalling passed-down war memories contained in an old, cracked cigar box. And then, according to the transcript Day posted on his Facebook page, he diverted:

The armies of the developed world have an unprecedented technological ability to create death.

What? Did you miss something? Maybe you were fiddling with your red poppy, you jingoistic, war-glorifier you.

I believe [my grandfather] would have a lot to say about several things that, in today’s fragmented world, are left unsaid. He would certainly speak up about the continuing violence done to the First Nations of Canada, who are plagued by disproportionate poverty, crime and incarceration, poor health, and who are disproportionately also the victims of violent crimes.

Day goes on to lament global inaction during the Rwandan genocide, and the so-called “international silence” on Palestinian human rights. (Understandable—perhaps the glare from someone’s white poppy was blocking out most UN declarations on Palestinian issues from the past several decades.) Day finishes off by with a quick stab at the Israeli Defense Force, exaltation of Romeo Dallaire, and then back to his grandfather.

Remembrance Day is a time to honour and remember the nobility of the principles defended by the brave citizens of Canada who have come before us. To honour those principles today, I think, requires us to recognize and stand against the atrocities committed at home and abroad.

In order to truly honour the sacrifices of those who fought for justice, we are now required to speak about new forms of injustice, perhaps ones that are harder to see, harder to recognize, that punctuate the lives of the many abused people of this planet.

Unfortunately, crass and opportunistic hijacking of public addresses is becoming somewhat of a theme on university campuses. Last month, University of Winnipeg valedictorian Erin Larson used her convocation address to slam Public Safety Minister Vic Toews. Her divisive political statements came off as ill-timed, to say the least, but Day may have taken the cake with this one.

Divisive political points have no place in a Remembrance Day address. A ceremony intended to honour the memory of war veterans should do exactly that. To deliberately look the other way demonstrates an inordinate lack of gratefulness towards previous generations, something for which I, as a member of this younger generation, am personally ashamed.  Next year, I should hope Day and like-minded individuals wait until the 12th to clear their social consciences.