Reconciliation on campus: what's the next step beyond inclusion? 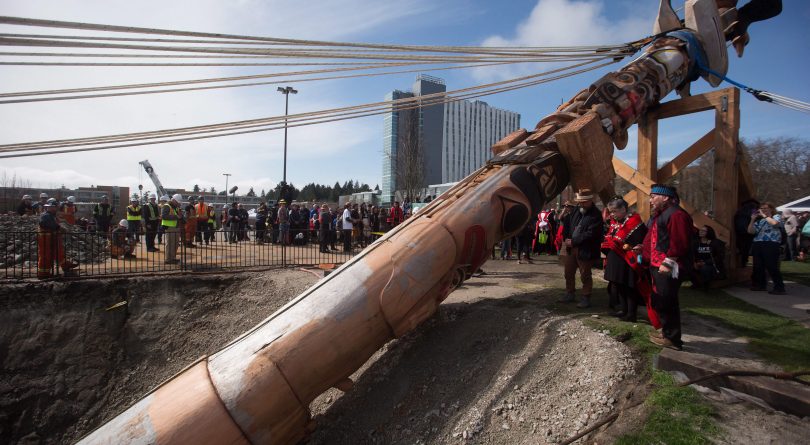 A 17-metre red cedar Reconciliation Pole is raised at the University of British Columbia in Vancouver, B.C., on April 1, 2017. (Darryl Dyck/CP)

Ruth Koleszar-Green likes to remind those on the York University campus how far Indigenous people have come in academia within a generation.

Koleszar-Green, an assistant professor in York’s school of social work, who is Haudenosaunee, recounts how her mother started at York in 1969, but the experience was so “horribly violent” that she did not complete her degree. “But now, one generation later, I’m chairing the Indigenous Council and am sitting at dinner with the [university] president, as I sometimes challenge her belief and understandings of Indigeneity,” she said.

As she talks, the professor prepares for a ceremony to celebrate the birth of a sweat lodge built recently on campus. Her children will attend. “My kids are getting fire-keeping teachings with knowledge keepers on the university campus, and my mother couldn’t stay here because it was so violent.”

Koleszar-Green, who has been on faculty since 2014, contributed to the university’s Indigenous Framework launched last fall. York, alongside many Canadian universities, has undertaken efforts to address the Calls to Action contained in the Truth and Reconciliation Commission (TRC) of Canada’s final report in 2015. Schools are now considering ways to approach Indigenization—broadly defined as incorporating Indigenous worldviews, knowledge and perspectives. The varying ways they approach this task can be considered three points along a spectrum, according to a study recently published in AlterNative, an international peer-reviewed journal. They range from simply hiring more Indigenous staff to “decolonial Indigenization,” a radical rethinking of post-secondary education.

The research began when Adam Gaudry, an associate professor at the University of Alberta, who is Métis, and Danielle Lorenz, a Ph.D. candidate at the U of A, compared their experiences of teaching Indigenous courses. They were “remarkably different,” says Lorenz. The grad student, who is non-Indigenous, found her classes did not believe facts about the legacy of residential schools or the high number of Indigenous children in the child welfare system. “It’s difficult for non-Indigenous people because it’s challenging their understanding of Canada,” she said.

Gaudry and Lorenz decided to survey their academic peers on their experiences in Indigenizing their respective institutions. The survey ultimately collected 25 responses from across Canada and the United States, with three respondents identifying as non-Indigenous allies. (None of the academics interviewed for this article are respondents.)

MORE: Going past the equity handbook

The first approach explored by the study, Indigenous inclusion, seeks to increase the number of Indigenous faculty, students and staff in Canadian academe, while maintaining its existing structures. It is the predominant approach, but the least transformative. “Indigenous students, faculty and staff [are] expected to adapt to the intellectual worldview, teaching and research styles of the academy,” the co-authors wrote.

A step beyond is “reconciliation Indigenization,” in which there is an attempt to alter a university’s structure. Approaches in this category include the establishment of advisory or reconciliation committees that set goals for Indigenization or the implementation of mandatory Indigenous-content courses.

That approach describes UBC as a whole, according to Daniel Justice, a Colorado-born citizen of the Cherokee Nation who is also a Canadian citizen and has been on the UBC faculty since 2012. UBC has had an Indigenous strategic plan in place since 2009 and worked to hire and recruit more Indigenous faculty and students before the TRC released its report. In April, it unveiled the Indian Residential School History and Dialogue Centre on its Vancouver campus. But Justice has heard reports of backlash from faculty on territorial acknowledgements, and on bringing Indigenous voices to the forefront. “I think we’re actually starting to see it from students as well, especially some white students who feel that attention going to Indigenous people is attention taken away from them,” he says.

The study cites Lakehead University in Thunder Bay, Ont., as a reason for initial optimism, given its efforts to introduce mandatory Indigenous courses starting in 2015. There was also enthusiasm when it founded the Bora Laskin Faculty of Law, with a focus on Aboriginal and Indigenous law. But the school faced scrutiny last spring when its dean, Angelique EagleWoman—the first female Indigenous dean of a Canadian law school— suddenly resigned, citing systemic discrimination. Further controversy came when the school named as interim dean a judge who a decade earlier imprisoned First Nations leaders for protesting development on their traditional territory. (Bora Laskin’s Aboriginal Advisory Committee said it was not consulted.)

Dennis McPherson, an associate professor in Lakehead University’s department of Indigenous learning, was not surprised by the developments. “There’s a lot of lip service to the programming but no substance to what they’re saying,” he says. McPherson, a member of Couchiching First Nation, has been at Lakehead since the early ’90s and was instrumental in creating the Indigenous learning department. When the university’s senate voted in June 1995 to use government funding intended to support the program’s development to simply cover his salary, McPherson camped out on the front lawn of campus for a month in protest. Not much has changed, he says, noting that within a 20-year span, his department has only grown from two to four faculty. Universities were designed with Euro-Western ideologies, and are fundamentally Christian and incompatible with Indigenous worldviews, he says. “Whether it’s a university here or anywhere else in Canada, they’re not going to change their ways,” he says.

Some envision a radical overhaul of Canadian academia. Based on their survey, Gaudry and Lorenz describe an option that is a “radical and substantive approach to Indigenization,” but also “off the radar for university administrators.”

It would reform universities in two ways. First, it would use a treaty-based model of university governance and practice. There would be two schools, one Indigenous and one non-Indigenous, that would coexist and share resources, but would operate autonomously. Secondly, the model would be “resurgence-based,” focused on rebuilding and strengthening Indigenous cultures, knowledge and political orders. They write: “This decolonial approach to Indigenization, by far the most popular among respondents, ultimately is about the redistribution of intellectual privilege, working toward collaborative relationships that decentralize administrative power.”

As for what solution will work best, there’s no one-size-fits-all solution, says Justice. The right approach depends on specifics of the Indigenous territory where an institution is located and should be guided by firm relationships with local communities. McPherson says to “let the colonizers have their universities.” Instead, he suggests First Nations people start their own universities on reserves. As a Status Indian, he says he could theoretically go to his reserve and start a school without interference or certification requirements from the federal or provincial governments. “What I’m lacking is the support of my own community to see they have the possibility of doing that,” he said. “We’ve been brainwashed into thinking the only curriculum . . . is the provincial curriculum.”

Gaudry and Lorenz’s efforts to parse the various approaches are useful, says Justice, noting that those outside of Indigenous studies feel there is a singular approach to Indigenization. “I think it’s a really helpful foundation for some even deeper conversations,” he says.

Lenny Carpenter is an Omushkego (Cree) freelance writer based in Toronto.

MORE ABOUT RECONCILIATION ON CAMPUS: