An insider's guide to the best campus event, place to study and more 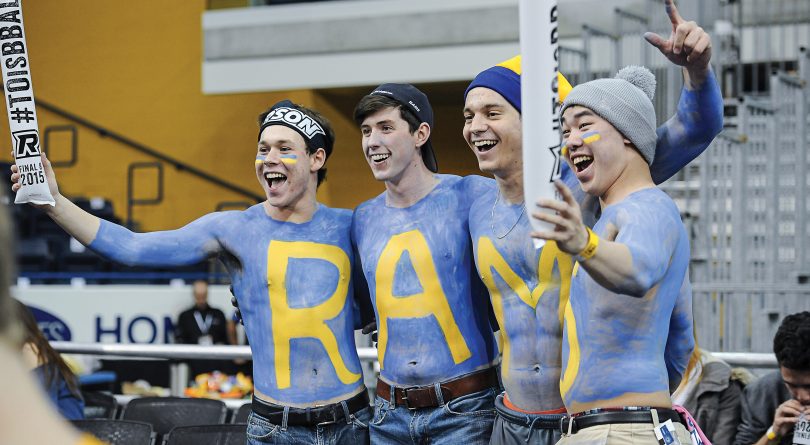 Best cheap lunch:
Oakham Café’s $5 student loan special
Best hangover breakfast:
Fran’s
Best bar for hanging out:
Imperial Pub
Best place to live:
For residence, Pitman Hall has the parties, ILLC has the queen-sized beds. Off-campus, it’s Kensington Market.
Best place to study:
There aren’t many quiet study spots available on this commuter campus, but the Sally Horsfall building is the least crowded
Best place to nap:
First floor of the Ryerson library
Best campus event:
Tuesday night karaoke at Ram in the Rye
Best giveaway:
There are different food trucks on campus every now and then, handing out freebies like pancakes and Tim Hortons coffee
Best campus food:
Salad King has been serving Rye students delicious Thai food for the past 25 years. If you show your student ID between 2 and 5 p.m. on weekdays, you get 20 per cent off.
Weirdest tradition:
Every March, engineering students manually push a vintage Volkswagen Bug around campus for 24 straight hours to raise funds for the Hospital for Sick Children
Best live music:
A quick transit ride will get you to the best venues in the city: Horseshoe Tavern, Mod Club and the Danforth Music Hall
If I could change one thing about the school:
More quiet spaces to work—there’s never anywhere to sit

Ryerson University offers more than just your average Canadian post-secondary experience. Yonge-Dundas Square—one of the busiest pedestrian intersections in the country—runs right through its urban campus and blends student life with the buzz of downtown Toronto. As someone who grew up on farmland, the sheer volume of new opportunities and people was far more stimulating than anything I learned in lectures.

With more than 90 per cent of students commuting to campus, Ryerson isn’t exactly known for its school spirit. It compensates for its lack of community with the vibrant and diverse city culture. The school has hosted its share of notable musicians including Drake and French Montana during orientation week and, most recently, Tory Lanez at the student union’s Loud Festival. The Mattamy Athletic Centre, which houses Ryerson’s gym and hockey arena, is situated in Maple Leaf Gardens, the former home of the Toronto’s NHL team.

Once a polytechnic institute, Ryerson’s reputation for offering hands-on learning still rings true. Lectures are supported by tutorials, labs and studio classes. The school is renowned for its journalism, media production and fashion programs, but is also home to large business and engineering undergraduate programs.

At Ryerson, we understand we’re not the prestigious University of Toronto, with its big stone walls and ivy vines. We’re way more laid back. Still, we go to school with fashion students—you can’t just wear sweatpants and a hoodie to class.

After Class
During Orientation Week, students have the opportunity to sign up for numerous student groups. Want to join a band? Musicians@Ryerson connects instrumentalists, vocalists and even DJs. Interested in foreign affairs? Ryerson Model United Nations offers a solutions-oriented style of debate. Want to write for the local paper? Walk into the Eyeopener’s office.

In the warmer months, the Kerr Hall Quad is a great escape from the city—whether you want to study in the grass, soak up some rays or throw around a Frisbee like a stereotypical university student.

Annual events like Pride and the Toronto International Film Festival (TIFF) are highly anticipated among students. My favourite night of the year is Nuit Blanche, an annual city-wide event that runs from sundown to sunrise every October.