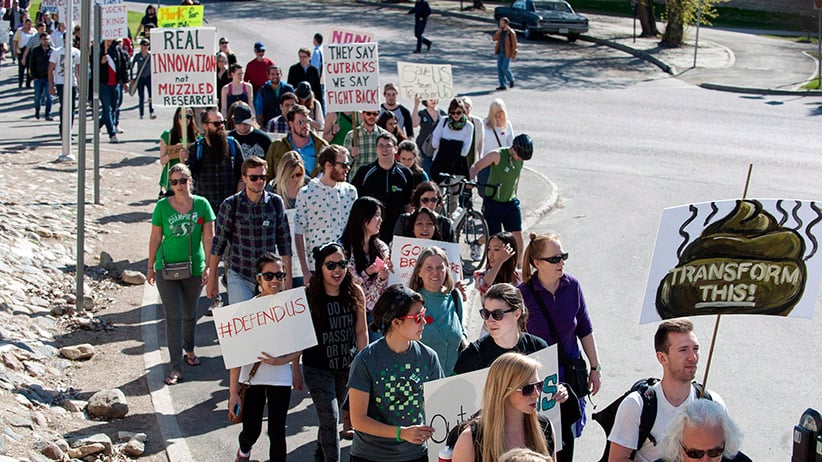 A rally protesting the administration of the University of Saskatchewan on May 20, 2014. (Liam Richards/CP)

Robert Buckingham was the dean of the school of public health at the University of Saskatchewan until he was fired on May 14, a decision that caused outrage among professors around the world and led to Wednesday’s dismissal of the university’s president, Ilene Busch-Vishniac.

Buckingham was fired after criticizing TransformUS, the school’s program prioritization process (PPP), in a letter circulating among academics entitled The Silence of the Deans. The missive was written a few weeks ago when he was working in Tanzania and received an email from the school’s vice-president and provost (who has since resigned) warning against publicly criticizing the decision to roll the school of public health’s programs into the medical college. It was a decision imposed after the school’s research and Ph.D. programs were ranked by the TransformUS task force in the fifth of five quintiles, making them “candidates for phasing out, subject to further review.” (His popular master’s program was ranked in quintile three and thus considered a “candidate for retaining with reduced resourcing.”)

Buckingham pleaded with the administration that the school had grown to 250 students in five years, that there are 800 applicants for 80 new spots each year, that if it is rolled in with the medical college it might lose international accreditation. “This doesn’t make any sense,” he told them. But at a December meeting, he says, deans were warned by the president that if they criticized PPP, their “tenure would be short.”

Being able to speak freely is one of the rights afforded by tenure. Though his tenure was since restored, his deanship wasn’t. “The only reason I want to be reinstated is that I want to be at convocation to confer degrees to all my students,” he says. Then he’ll retire.

PPPs like TransformUS pit hundreds of university programs and services against each other in one mega-ranking that is supposed to show where it’s best to trim budgets. Many Canadian universities and colleges have begun their own versions recently and at least one other, the University of Guelph, has finished. At Guelph it was used to evaluate 492 offerings, including minors and master’s programs—plus everything from parking to the bookstore. For those keeping track, parking and athletic marketing came out on top, while the bookstore and geography came out on the bottom.

So trendy is PPP that the Ontario government last year approved implementation grants of $500,000 each for York University, Georgian College, Mohawk College, Sault College and Wilfrid Laurier University, plus smaller amounts for Nipissing University, Ryerson University and Brock University. Some goes to consultants. At York University, vice-president and provost Rhonda Lenton says that $148,296 of the $500,000 received for their academic and administrative program review was spent on consultants while much of the rest was spent on labour, including substitutes covering for the dozens of faculty and staff pulled away from teaching and other duties to fill out the forms. Lenton says York didn’t use consultants as much as other universities because they decided, after much consultation, on a “made-in-York” approach.

Administrators like Lenton defend PPP as a fair way to improve quality in a time of fiscal restraint. “We have a gap between our revenue and our costs right now that is substantial and growing,” she says. Critics, meanwhile, say it wastes huge amounts of money, is biased against certain types of programs and that administrators are using it mainly to get staff to buy into the same cuts they will try to impose anyway.

Leo Groarke is the University of Windsor’s outgoing provost and vice-president academic and will start as president of Trent University in July. Unlike some of the faculty who criticize PPP, he agrees with fellow administrators that most Canadian universities are facing budget crises due to a combination of quick-rising costs like ballooning faculty pensions, decreases in government funding and demographic trends that mean falling revenues can’t be made up by boosting domestic enrolment.

But he also says there are obvious problems with the types of comparisons made in PPPs. For example, many PPPs give higher rankings to programs that bring in more research funding. But how do you deal with the fact that a climate scientist working in the Arctic is going to bring in bigger grants than a novelist whose work is less expensive, even though the novelist’s work may be equally valuable to society?

Another problem is evaluating departments that teach many students but don’t have many enrolled as majors. For example, mathematics professors may teach thousands of business majors, but may not do well in program prioritization because math has few of its own majors. The task force at Guelph admitted it couldn’t account for this. Lenton, the York administrator, says her school’s review takes this into account.

Craig Heron, a history professor at York University, has closely examined the work of Robert C. Dickeson, who wrote the book Prioritizing Academic Programs and Services: Reallocating Resources to Achieve Strategic Balance and was consulted by the University of Guelph and Saskatchewan on their PPPs. Dickeson suggests a commonly used set of criteria including demand for programs, history of programs, and costs, which Heron says is biased against some types of programs. He points out how Dickeson’s book states that, on campus after campus, certain programs end up being rated as marginal: foreign languages, anthropology, geography, geology, new programs in ethnic or gender studies and interdisciplinary programs.

A comparison by Maclean’s of the PPP rankings of four-year bachelor’s programs at Guelph and Saskatchewan (see chart below) shows a high degree of agreement in where programs ended up. Anthropology is in the third quintile at Saskatchewan making it a “candidate for retaining with reduced resources,” and fourth at Guelph, where lower quintiles mean lower priority. Statistics, French, classics and geography were in the bottom two quintiles at both schools while mechanical engineering, nutrition, environmental engineering, accounting and psychology—all big or commercially successful programs—are in the top two quintiles at both schools.