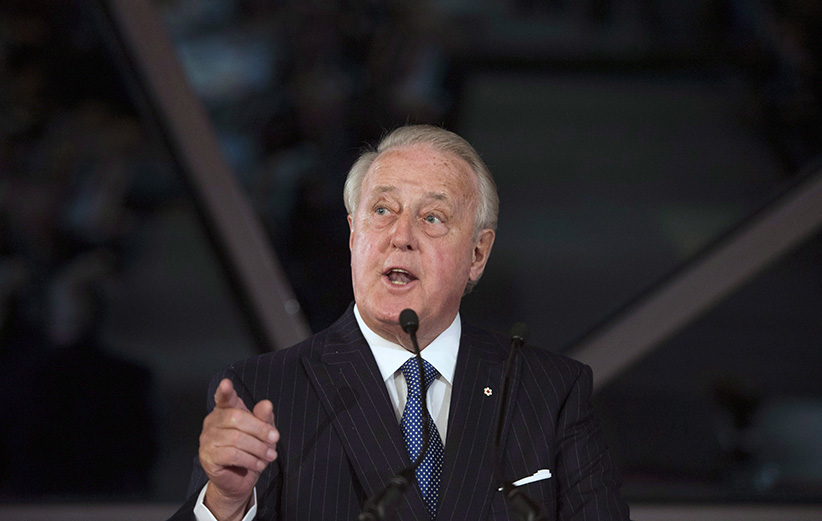 Paying for university just got a whole lot easier, with former prime minister Brian Mulroney’s announcement of a $10-million endowment for high school students. Mulroney announced the new endowment in a hall crowded with dignitaries, including astronaut Chris Hadfield, Juno-award winning quartet the Tenors and Toronto Mayor John Tory. The endowment comes from the Horatio Alger Association of Canada, a non-profit organization that gives out $5,000 scholarships to high-achieving students from families earning less than $55,000.

“The stories of the scholarship winners are both heartbreaking and fill me with immense pride to be a Canadian,” Mulroney said at Toronto’s Design Exchange. “These young people have overcome horrific personal challenges, but they never blame others.” The association counts several famous Canadians among its members, from hockey legend Wayne Gretzky to 16-time Grammy-winner David Foster.

The announcement dramatically expands the scope of the scholarship program, which was previously available to students from British Columbia, Alberta, Quebec and Ontario. Now high school students from every province and territory can apply for one of 80 awards worth $5,000. In addition, the top five applicants will win a Canadian National Scholarship, which comes with $10,000 and a trip to Washington for a conference with the winners of the association’s American national scholarship.

“In the United States, the Horatio Alger Association has changed the lives of thousands of people,” said Bruce Heyman, U.S. ambassador to Canada. The American association has been around since 1947 and has a much larger scholarship program — 37,000 applied for about 900 scholarships last year.

Solomiya Salo, a third-year Ryerson University student who won an Ontario scholarship in 2012, had a 92 per cent average in high school, worked 25 hours a week and was a member of three bands and two choirs.

Her success is particularly extraordinary considering she emigrated from Ukraine at the age of 12 after her mother and grandmother died in quick succession. “It means so much to be a recipient of this life-changing scholarship. I could not even imagine how hard it would be without this help.”

Rebecca Macdonald, executive chair of energy giant Just Energy, helped bring the scholarship program to Canada after meeting American students who had been helped by the program. Over the past four years, more than 200 Canadian students have received scholarships; in 2015, the average family income of a recipient was under $19,000, 28 per cent had been physically or mentally abused, and 23 per cent had a problem with drugs or alcohol in the family, according to Macdonald. Despite these difficulties, 61 per cent worked while maintaining an 87 per cent average.

“It is astonishing how many scholars have gone through very difficult times some of us can not even imagine. Those bright students deserve a chance for a much better future,” said Macdonald.

The $10-million endowment is designed to fund the scholarships in perpetuity, making it one of the largest national scholarships in Canada. Both the Loran scholarship, valued at $100,000, and the TD Scholarship for Community Service, worth $70,000, are larger — but they are open to all Canadians, regardless of family income.

Fairfax Financial Holdings will also fold their scholarship program in with the Horatio Alger scholarships, adding another 45 awards worth up to $5,000 for students at 23 post-secondary institutions nation-wide.

“Offering a single nation-wide scholarship will allow us to recognize those that are too often overlooked, such as First Nations and recent immigrants,” said Prem Watsa, CEO of Fairfax and the incoming president of the Horatio Alger Association of Canada. Between the Fairfax and Horatio Alger scholarships, 130 awards will be given out next year with a total value exceeding $500,000.

Applicants need to provide proof of their financial situation, get a reference, and write four short essays. Applications for students graduating in spring 2016 will open Aug. 1, 2015.