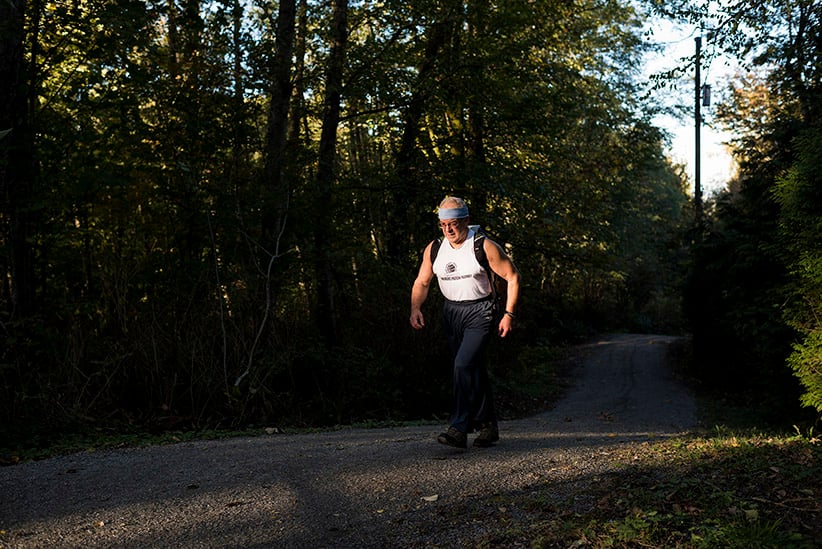 Professor Andrew Rawicz hung up his car keys in 2002 and since then makes the 5 km trek to work and back every day with more than 30,000 km under his belt. He’s now less than a year away from walking the entire circumference of the earth. (Photograph by Jimmy Jeong)

Andrew Rawicz’s daily routine, five days a week and 50 weeks a year, goes like this: After a breakfast of scrambled eggs one day or oatmeal the next, he takes a glucosamine chondroitin and a methylsulfonylmethane capsule, the first of two doses, to keep his 66-year-old joints lubricated. Then it’s 300 push-ups and 500 to 600 sit-ups.

After that Rawicz laces up his Merrell hiking boots, slings on his backpack, tunes into CBC on his cheap radio and starts a 4.7-km walk uphill along a forested path to Simon Fraser University’s campus atop Burnaby Mountain. “It takes me 42 minutes up and 36 to go down,” he says in measured syllables with a Polish accent.

Growing up in Poland, Rawicz had always been fit: he did classical wrestling and weightlifting in university. After leaving in 1981, he spent a year as a lumberjack in Belgium. While teaching at SFU in 2002, Rawicz started pondering how, in Poland, his parents never owned a car. They walked pretty much everywhere they went. “When you are a child of parents who walk all the time, you know it is possible.”

So one summer day in 2002, Rawicz, with his dog, took a test walk to SFU to determine how long it would take to hike to work. It was about an hour, and Rawicz pledged to keep walking to work daily—no exceptions—until he attained his equatorial goal. He goes through two pairs of boots a year.

Slashing rain? No bother. “I found quite a while ago I don’t dissolve in water,” he jokes. “I am,” he admits, “a bit obsessive” about keeping healthy. “My plan is to live at least 125 years. I know that I will, because a plan is a plan.”

Rawicz started a biomedical engineering program at SFU when he saw how little technology existed to improve the lives of people such as his son, Volko, who has Duchenne muscular dystrophy. A severe form, Duchenne affects one in 5,000 males, and those with the condition have an average life expectancy of 26. His son is now 45, “which defies the stupidity of the textbooks,” says Rawicz.

He admits he has an outlier philosophy on medicine and health, preferring an Eastern, holistic approach. “I haven’t been sick for more than 45 years. I have a ton of theories—which of course you don’t have to agree with.” One of them is that Western civilization—with its reliance on doctors and drugs—has lost its ability to listen to our bodies. Rawicz felt he had lost touch with his, but walking and his health regime have helped him tune back in.

Getting his engineering and physics students to be mindful of theirs is another matter. While most are reasonably active, they “think they are invincible,” he says, and tend to disregard health advice from their professor. So Rawicz is not shy about classroom demonstrations to prove he’s defying age through exercise.

“I challenge them. I ask, ‘How many push-ups can you do?’ ” Most students manage only 20 or 25, while Rawicz can easily polish off 100 (one-third his daily regimen). Two years ago, in a more extreme demonstration, he asked his biomedical students to guess how many people could stand on his chest at once (he’s five foot nine and 185 lb.). Most thought one. He managed five—and could still talk. “This makes an impression,” he says. Of course, they stood on a piece of plywood, as “heels would not have been comfortable.”

Students may not be swayed by Rawicz’s example, but some colleagues have. Albert Leung, 64, a fellow SFU engineering professor, watched Rawicz for a few years, “rain or shine, even in the heavy rain. He’s just a stubborn guy.” Inspired, in 2010 Leung started walking to work himself, averaging three days a week, 3.5 km each way.

Does he believe that Rawicz can keep up the pace for another 4½ years to reach that 40,000-km mark? “Absolutely! This guy is crazy. He is not going to die any time soon. He is strong as a horse.”