Shouting ‘racist’ in a crowded university 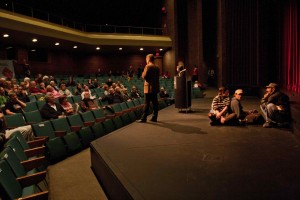 Christie Blatchford’s scheduled speech at the University of Waterloo was cancelled Friday after three students occupied the stage and refused to leave.

The Globe and Mail columnist was to talk about her new book, Helpless: Caledonia’s Nightmare of Fear and Anarchy, and How the Law Failed All of Us, when five students decided to play “activist;” three planted themselves onstage, one acted as “negotiator” and another as “media relations.” It’s just like how grown-ups do it, huh?

“We don’t want people who are really, really racist teaching [the people we love],” negotiator Tallula Marigold told the student press. “And we don’t want that person to have a public forum because it makes it dangerous for others in the public forum.”

Marigold was clearly alluding to the widely known, yet rarely remarked upon “public forum plague,” during which individuals present are subject to mental and physical peril (and possibly a nasty rash) when a meanie takes the podium. Dangerous, indeed.

“Our goal was to not let her speak, we accomplished that.”

Kudos, Marigold and crew, for finding a method of protest almost as dignified as holding one’s breath. And for such a worthy cause, too! Take that, free expression!

Blatchford’s new book examines the role of government during the 2006 occupation of the Douglas Creek Estates in Caledonia, Ontario, by members of the nearby Six Nations reserve. Blatchford argues that the occupation, now in its fifth year, was mishandled by a government that failed to treat all of its citizens equally. It’s our good fortune that those scholars at UW were able to recognize the dribble for what it is: vile, illegal hate speech. Surely too dangerous to be granted a public forum!

This incident is a poor copycat performance of the demonstration that took place at the University of Ottawa last March when an actual crowd of protesters gathered in anticipation of a lecture by right-wing pundit Ann Coulter. Coulter, known for her controversial opinions and inflammatory remarks, lived up to her reputation when she told a Muslim student at the University of Western Ontario to “take a camel” a few days before she was scheduled to speak at the U of O. The Ottawa protest achieved what it sought, and prevented Coulter from taking the stage at the university.

On Friday, the University of Waterloo protesters had the same goal. “Unfortunately there is a small minority that felt that they would win if they’d just sit on the stage and yell ‘racist, racist, racist’,” said UW assistant director of media relations Michael Strickland, obviously forgetting that they’d have to first pull their thumbs out of their mouths to do so. “We made a determination that since she wasn’t going to get a word in, in any sort of respectful fashion, there would be no point in bringing her out and having her subjected to that,” he said.

Now, what’s more embarrassing: these students ostentatiously patting themselves on the back for using bully tactics to censor debate on an important issue, or the fact that UW couldn’t handle a protest of three? (I mean, they did have a “negotiator,” after all.) In any case, Blatchford’s speech will be rescheduled and rumour has it protesters are already threatening to bang their heads against a wall and not eat their vegetables. Can’t wait.

– Photo by Nick Lachance of The Cord